Cars overflow onto both sides of state Route 3 outside of Saranac Lake at the Ampersand Mountain trailhead last summer. (Enterprise photo — Justin A. Levine)

Kathy Cavallaro, right, counts cash brought in by students at L.P. Quinn’s Radio Day that will go toward providing hospice services in the next year. (Enterprise photo — Aaron Cerbone) 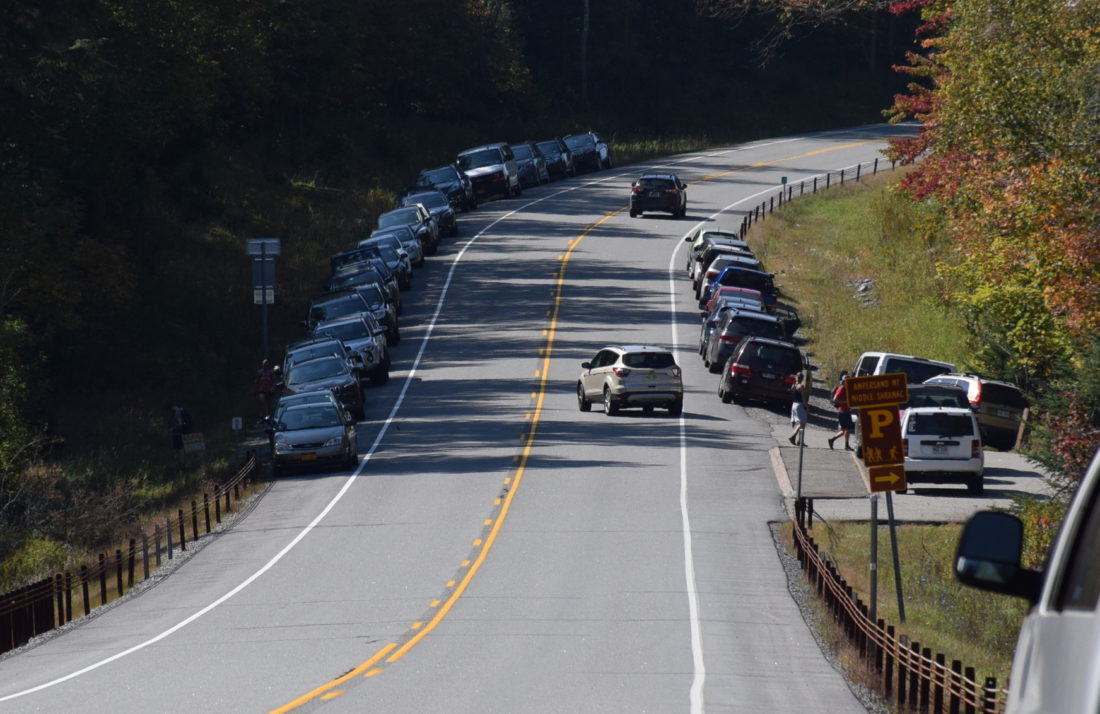 Cars overflow onto both sides of state Route 3 outside of Saranac Lake at the Ampersand Mountain trailhead last summer. (Enterprise photo — Justin A. Levine)

It’s no surprise to anyone who has been in the northern Adirondacks during the summer and fall that many trailhead parking areas are often overflowing, but a recent study has confirmed that parking locations serving the High Peaks are often at, near or more than double their capacity.

The Adirondack Council, an environmental group based in Elizabethtown, conducted a study last fall between Labor Day and Columbus Day weekends that found that 35 parking areas designed to accommodate 1,000 cars had more than 2,100 cars trying to park at them during the peak weekends.

For instance, the group found that at the Cascade Mountain trailhead on state Route 73 outside of Lake Placid, there is officially parking for 73 cars. However, on fall weekends last year, there was an average of 240 cars parked there. Ampersand Mountain, part of the popular Saranac Lake 6ers and also in the High Peaks management area, has parking for 10 cars. The Council found the parking lot and roadsides around it typically had 64 cars. Similar results were found for parking in Keene Valley, Elk Lake and Hurricane Mountain.

“Large crowds are a reflection of the growing interest in hiking and outdoor adventures across all age groups, caused by increased social media, photo-sharing, traditional marketing efforts, and a trend toward relatively inexpensive yet accessible recreation,” Keene town Supervisor Joe Pete Wilson Jr. said in a press release.

“Too many randomly and improperly parked cars leads to public safety problems for our local governments and emergency responders,” Bill Farber, chairman of the Hamilton County Board of Supervisors, said in the release. “Rural roads get too clogged for traffic and particularly for emergency responders. Plus, parking along state highways puts hikers into the path of motor vehicle traffic which is traveling 60 miles an hour. Avoiding disastrous outcomes requires better planning, better management, and most importantly, action on all our parts.” 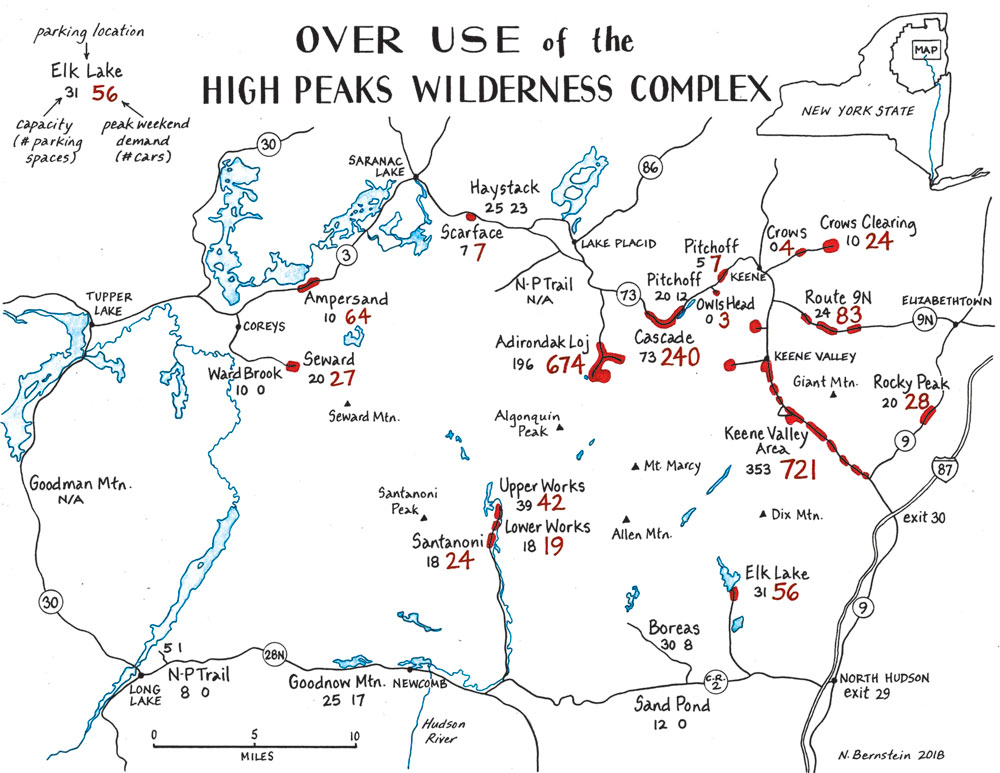 The state Department of Environmental Conservation has used small parking areas as a way to limit the number of visitors to the High Peaks, but the Council study seems to show that approach is ineffective.

“When it created the current management plan for the High Peaks Wilderness in 1999, the DEC and environmental organizations had documented that frequent big crowds had caused eroded trails, packed campsites, crowded mountain peaks and an accumulation of human waste,” the Council wrote in the release. “The DEC said it would use the parking lots for each trailhead as the means of limiting public access to the carrying capacity of that landscape.”

But Neil Woodworth, executive director of the Adirondack Mountain Club, said that approach is not enough.

“I think it is clear that we need to do more than just keep parking lots small,” Woodworth said in the release. “We should explore the best of what is being used on federal and state lands across the country and decide what will be most appropriate here.”