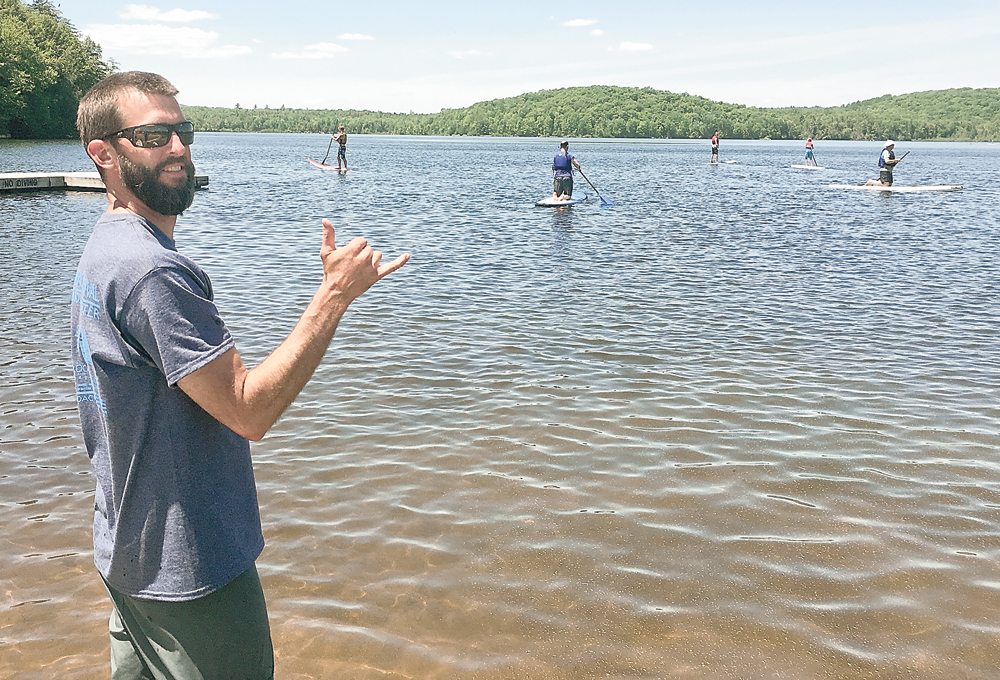 With an eye on hosting a paddling-related event every day in the month of June, the partners — Adirondack Lakes and Trails Outfitters, the Northern Forest Canoe Trail, St. Regis Canoe Outfitters and Mac’s Canoe Livery — are offering guided paddles, demo days, lectures and slideshows.

Jason Smith, of Lakes and Trails, said the idea is to boost local paddling-related businesses as well as draw people into Saranac Lake before the full onslaught of summer visitors arrives in July.

“It kind of started with Mike [Lynch] and I recognizing the first year that there were a lot of paddling things happening, if we did a few more things we could have this event,” Smith said. “So it kind of started itself in a way.”

Smith said the increase in events is sort of a balancing act, and since Celebrate Paddling is still young, organizers — including Smith, Lynch, Brian McDonnell and Dave and Rivka Cilley — are trying to find a balance of what will bring people into the area. 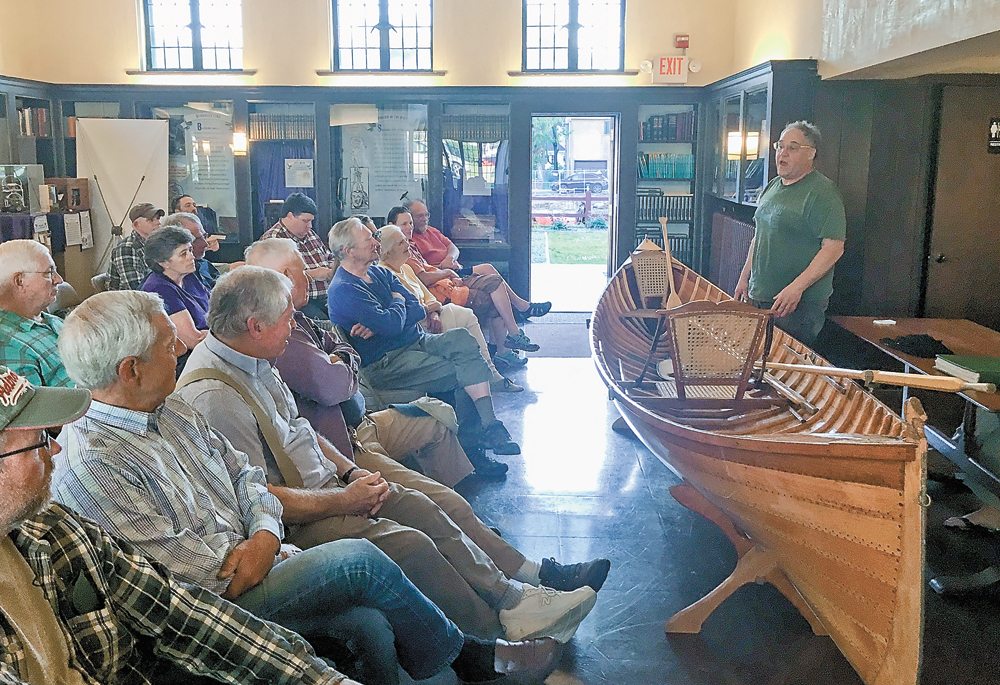 “We tried to bump it up a little bit, trying to get a full calendar of events,” Smith said. “Our goal was to try and get something every day of the month, whether it’s big or small.

“So what we thought would be a great goal for this event is, we want to benefit our own businesses but at the same time benefit the community and the businesses in town.”

With a combination of both weekend and weekday activities, Smith said the organizers are really trying to get locals out and about after work, while drawing regional visitors in on the weekends.

“We thought of after-work type things — lectures, slide shows, movies — that brought people downtown to somewhere like Bitters and Bones,” he said. “The first year, we brought something like 30 people in [to Bitters and Bones], which is pretty good for a Wednesday evening in June. 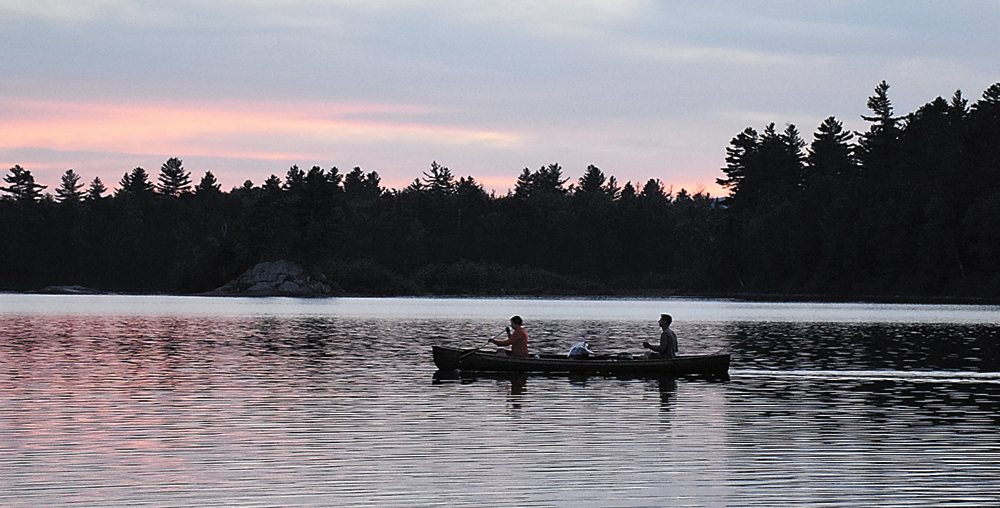 Paddlers make their way across Rollins Pond in a canoe. (Enterprise photo — Justin A. Levine)

“And then on weekends, our hope was kind of regional. We hoped that we would draw more people from a larger area and I think as we move forward, we’ll be able to draw people in with even bigger events that get people to stay the weekend.”

Smith said he’s seen that type of growth with the Stand-up Paddle Board Festival that has been in Saranac Lake for the last seven years, noting that many people come to try SUP and end up staying in the area to go hiking or biking.

He also said the increase in events this year is partly a function of the interest already displayed and an effort to bring more people into the paddling fold.

“Year one, we didn’t have something every day, it was something like a couple of things mid-week,” he said. “We did have most of the weekends filled with something and then we kind of held steady for year two.

“And then as we reached year three, we kind of reached out early to the paddling community to see who else was interested. We discussed what we could keep the same or even take it to the next level. The goal was to really fill the calendar with a lot of happenings.”

Smith said in the past two years, businesses like Bitters and Bones and Blue Moon have seen big crowds during the week, as has Historic Saranac Lake. Smith said business owners were thrilled with the number of people who came in.

“Finding a balance of the right amount of events and the right type of events — this will be a good test this year because we filled the calendar so much,” Smith said. “Are there too many things, or is it just right?

“The idea of getting people from the immediate area to come into town and hang out after work, and on the weekend try to get that radius out to a day’s travel or more is the ultimate goal.”

He said the turnout to events over the last two years is a kind of proof that people like and want what’s being offered.

“I think if all goes well, we can next year take it to the next level.”

Celebrate Paddling month kicks off June 2 at the Lake Colby beach with a Swift Canoe and Kayak demonstration where people will be able to try out a variety of boats. Adirondack Lakes and Trails Outfitters will offer guided paddles each Thursday throughout the month, and Mac’s Canoe Livery will host more than a dozen guided trips, including several opportunities to explore Barnum Pond north of Paul Smiths. St. Regis Canoe Outfitters will also offer guided trips.

Guided trips include paddles on the Saranac River, as well as Stony Creek and the Raquette River, the Seven Carries route in the St. Regis Canoe Area and on Middle and Lower Saranac lakes.

And while most of the activities get people out on the water, there is plenty to do for armchair adventurers as well. Blue Moon will host a presentation on packrafting and aquatic invasive species on June 5, and the next night Zander Connor and Tyler Citrin will detail their 29-day sea kayak adventure exploring the shoreline of the United Kingdom at Bitters and Bones. Later in the month, McDonnell will give a talk on the history of the famous Adirondack Canoe Classic, better known as the 90 Miler.

There are also plenty of learning opportunities, with clinics on whitewater paddling, kayak strokes and general canoe use. In addition to the on-water events, there will also be a clean-up of the Saranac and Raquette rivers, a food tasting and recipe swap and a trivia night. The annual SUP Festival will take place from June 15 through the 17.

While some of the event are free, others require payment.

Lynch, who works as NFCT’s New York outreach coordinator, said there may still be events added to the schedule, but there is a listing of well over 30 activities on the website at www.celebratepaddlingadk.com.