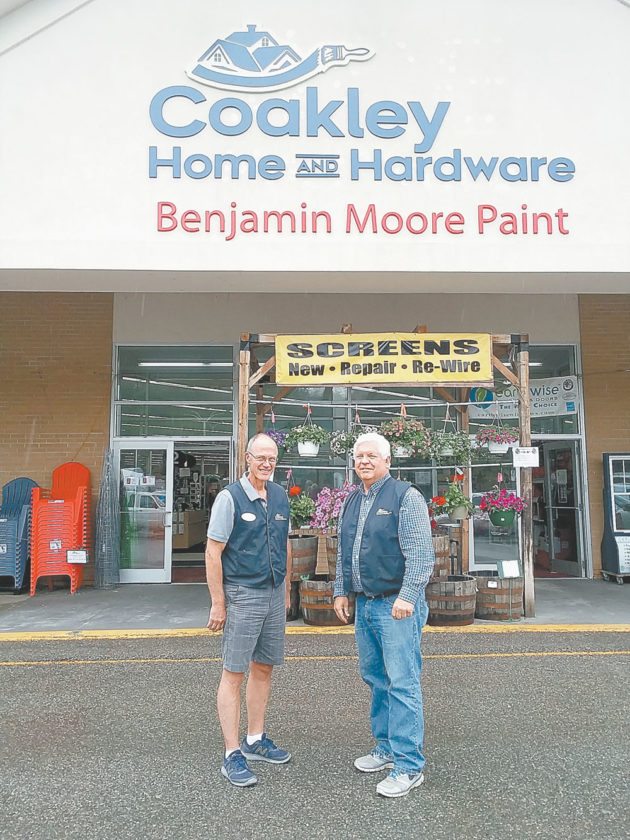 During a brief sunny interval on Tuesday, store manager Bob Bayruns and Bill Coakley stand under the new sign at Coakley Home and Hardware, which has ended its arrangement with Ace Hardware. (Enterprise photo — Glynis Hart)

SARANAC LAKE — Thirteen years ago, when the big-box stores of Lowe’s and Home Depot moved into Canton, Bill Coakley thought his family’s hardware store there “had probably grown as much as it could.”

Coakley, one of the third generation of Coakleys in the century-old business, had always loved the Adirondacks, so they opened a second store in Saranac Lake.

“Interestingly, since we’ve moved up here, the Canton store’s business has tripled. Both stores are doing well,” Coakley said.

Recently the store made another big change, ending its co-op arrangement with Ace Hardware. The sign in front of the store now reads “Coakley Home and Hardware,” and the Ace designation has been removed. Coakley said the main reason is that the store offers flooring, kitchen and bath remodeling supplies.

“And we take those departments very seriously,” Coakley said. “We work with a lot of quality contractors in the area, and we deal with the largest flooring distributor in the Northeast.”

The store recently added a gift section, too. Coakley said the changes are consumer-driven.

“We’ve developed into what our customers have asked us to be. Ace is more cookie-cutter, and we’re not a cookie-cutter store.”

“When we really dug in [to switching away from Ace], it proved it was the best thing for customers, staff and the Coakley family,” he said.

Coakley said he didn’t grow up planning to be in the family hardware business. He played hockey, but then he got injured and took a job coaching hockey at St. Lawrence University.

“It just happened,” he said. “My Mom got cancer, so I stayed for another year, and then Dad was ready to get out in about 1976. My sister and brother both ended up back in Canton, too.

“It’s been wonderful for the family,” he said. “We have the best of both worlds: the St. Lawrence River and the Adirondacks, and mostly the people. North Country values are the same.

“I have to tell you how pleased management is with our group, our teams in both stores,” Coakley said. He made special mention of Amy McCarthy and Greg Wittmers, who have been at the Saranac Lake store since it opened, as well as Bayruns and Assistant Manager Brittany Sternberg. “Bob and Brittany have assembled a wonderful staff that really enjoys helping people. I’m confident we have the best team ever.”

Coakley said the store takes its role in the community seriously. Bayruns has served as Chamber of Commerce president, and every summer weekend the store offers its help to local groups to hold fundraisers.

“Groups have made anywhere from $400 to $700 in a few hours,” Bayruns said. “We have 11 on the books through August. We donate the sidewalk, a grill, hamburgers, chips — every bit of the product they need.”

“It’s a great way for us to support these groups, and obviously, it brings traffic to the store,” said Coakley. “Community involvement is big for us.”

The store has a greenhouse and gardening center set up in the parking lot, and they expect to hire more staff soon. “We’re always looking for good people. Full and part-time. We want them to be knowledgable and experienced, of course, but the most important thing is that they’re good team players who enjoy helping folks.

“It all comes down to people,” Coakley said. “The name will say Coakley Hardware, but it’s all about people.”