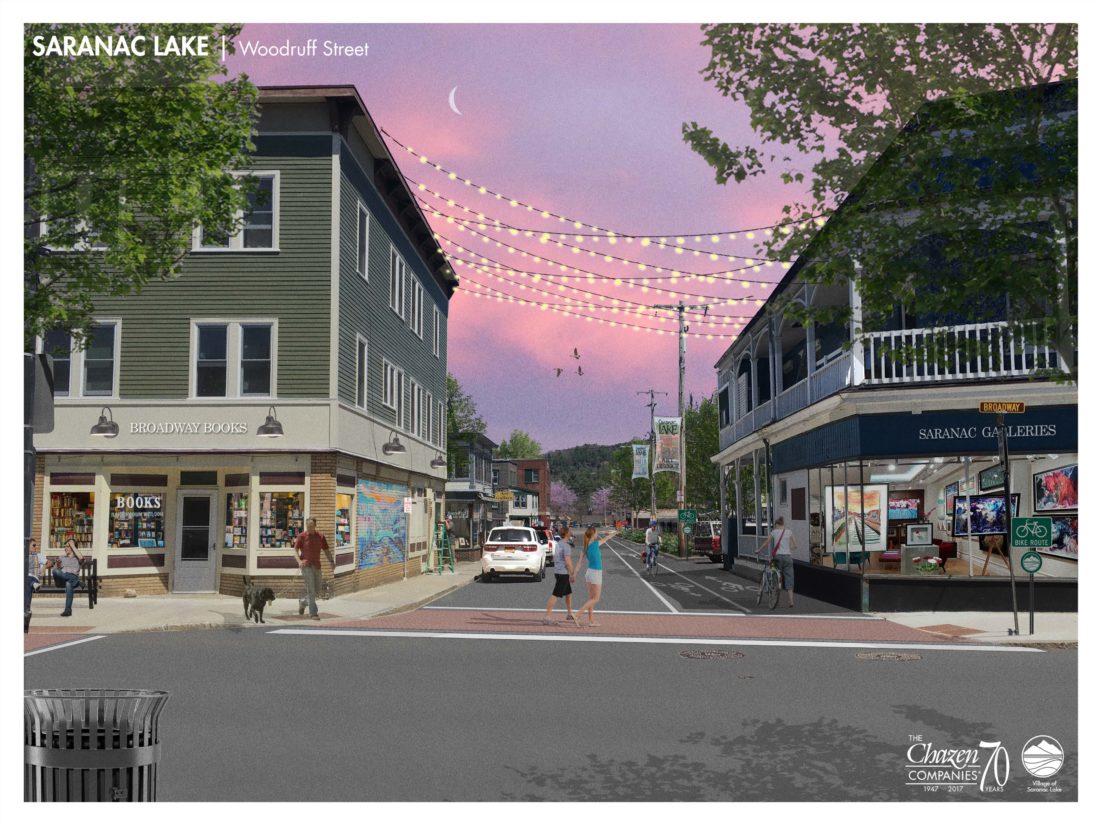 An architect’s rendering of Woodruff Street in downtown Saranac Lake after a facelift proposed for the Downtown Revitalization Initiative. (Image provided— Chazen Companies)

SARANAC LAKE — Local officials have assembled a wish list of projects for a $10 million Downtown Revitalization grant application and are looking for public input on the projects.

The public comments are an important part of the grant application’s appeal, said Jamie Konkoski, the village community development director. She said the potential projects were assembled from various plans that have been put forward over the years, some by local interest groups. Some of the plans have been achieved or partly achieved, others have yet to be achieved.

“It’s a compilation of things that were identified as in the community’s interest,” she said. “We’re supposed to show the potential for Saranac Lake.”

The revitalization project proposals can be found on the village’s website, saranaclakeny.gov. Interested citizens can scroll through the slide presentation and make comments alongside the pages of description. They can also look at a hard copy at the library and leave comments in the box at the library display.

Konkoski emphasized that none of the projects is finalized; everything depends on the grant process. Should the village receive the $10 million, a strategic investment committee of stakeholders — business owners, private individuals and other interested parties — would form to plan how to spend it. The state would guide that process through the Department of Homes and Community Renewal.

In the business improvements category, several projects are proposed.

“The idea is to leverage private investment,” said Konkoski. “There’s no specific formula for how much of a project would be grant-funded.”

A Main Street business incubator, a retail incubator, expansion of the Loon Center, a brewery and garden at Bitters and Bones, and a downtown startup challenge grant are all proposed to increase business and encourage economic development of the downtown. Business incubators help new companies develop by providing services such as management training or office space. A retail incubator might provide low-cost retail space for fledgling businesses. Both incubators are commonly associated with business mentorship and links to sources of investment.

Expanding the Loon Center could mean more educational space for exhibits and educational displays, office space and a gift shop.

The public works category focuses on streets, parks and infrastructure. For instance, grant assistance could improve Woodruff Street by fixing the road and the sidewalks from Broadway, painting bike lanes, improving the Church Street crossing, and making the block more inviting by creating an archway or hanging lights.

Church Street could be improved with better sidewalks, more trees and landscaping to all parking lots. [In the business development category, a reboot of Tops parking lot and facade are included.]

Church, Main, Broadway and River Street could all be made more attractive with more trees, decorative light poles and pole banners.

Completing the River Walk is big. It could go alongside the former Dew Drop Inn to Broadway, and also from Tops along Woodruff Street to the rail corridor. The William Morris Park, by the carousel, could use new play equipment, sculptures and a redesigned entrance. Riverside Park would benefit from landscaping to discourage the geese.

A whitewater park in the Saranac River, downstream of the Frank Ratigan Bridge could be created by enhancing the channel and designing a drop where kayakers could practice.

Redeveloping the Union Depot area to make it attractive to development is another infrastructure idea: relocating propane tanks and remediating any site contamination, making a road that connects to Broadway and replacing a sewer line could get that area ready for housing or other development.

Finally, development projects include museum expansion at 188 Main St., where the Medical Associates office was for many years; relocating Pendragon Theatre; Tops Market renovation; new housing and development on Upper Broadway, and an Adirondack-themed play center for children.

Facade improvements could take place to the rear of buildings on Main Street, improving the view from the River Walk. Several of the business owners are already committed to renovations on that side.

“There’s going to be money available,” said Konkoski. “It really depends on the impact your project will have on the community.”

To view the proposed designs for revitalization in Saranac Lake, click here.