Settling in with an open mic 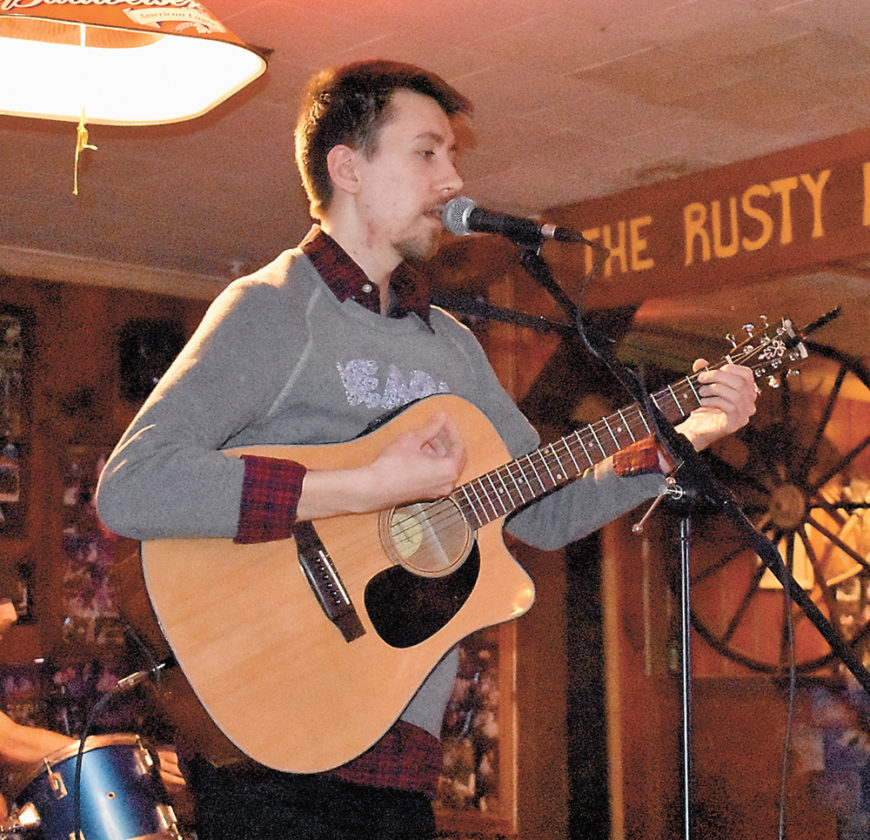 Griffin Kelly performs at the open mic night at the Rusty Nail in Saranac Lake, which is held every Tuesday at 9 p.m. (Enterprise photo — Aaron Cerbone)

The first time I performed at an open mic night was when I was attending Plattsburgh State University. The song I chose was “Elephant Gun” by Beirut, and I was going to play it on ukulele. It was a white Makala brand soprano uke with a little dolphin-shaped bridge. I had practiced the song about 100 times in front of my friends before going up on stage. There were only three or four chords, and the lines were pretty repetitive. I figured I would nail it. I even had one of my friends record it so I could send it to my then-girlfriend, but alas, I never showed her the video.

I bombed so freakin’ hard.

The ukulele wasn’t electric, so I had to stand as close to a microphone as possible without hitting it with my strums. I had no idea where to look, so I just looked at my hands. I forgot the chord progression completely and wound up singing the same line a good seven times in a row before giving up.

After strumming the last chord, I said, “Thank you. Sorry.”

The audience still clapped because, you know, nobody wants to be a jerk, and plenty of them have probably been in that situation before, too. 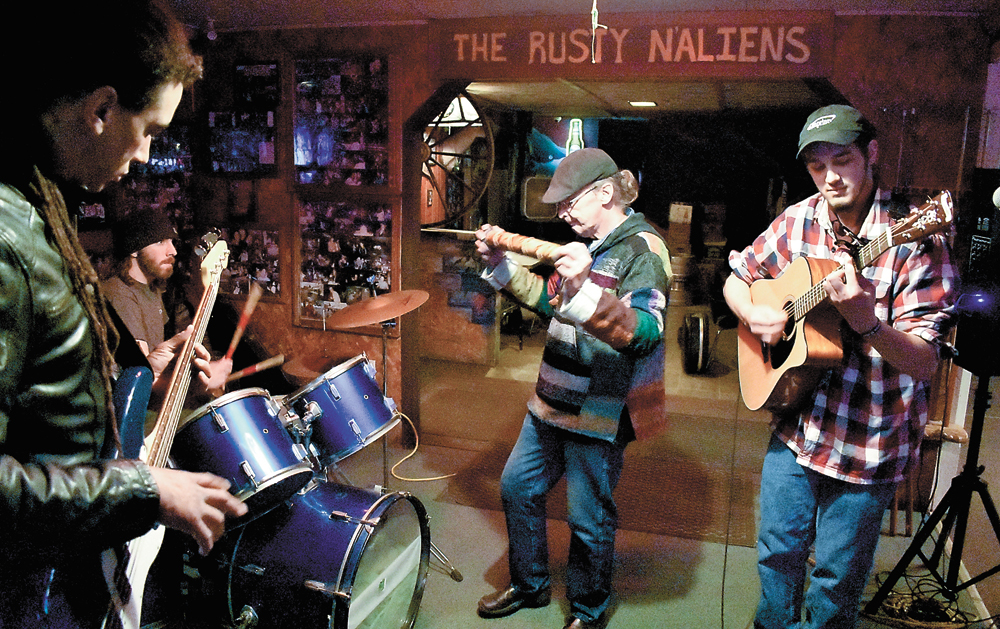 Miraculously, that incident stifled my open mic night appearances for only a few months. I soon got back into performing. Did my playing and singing improve? Probably a little bit, but the major difference was that I just stopped caring about my mistakes. If I hit the wrong chord or forgot the lyrics, it was funny and forgivable rather than awkward and embarrassing.

I’m kind of a shy and weird dude, but put a guitar in my hand and a mic in my face, and I start to calm down. It’s a way for me to make friends and connect with people that I probably never would.

I moved to Saranac Lake six months ago to work for the Enterprise. I didn’t know anyone when I got into town. The closest friends I had were about an hour away in Plattsburgh. However, I arrived just in time for the insane winter, so that drive to my alma mater wasn’t always possible. The big question for me was, “Are there any open mic nights around here?” 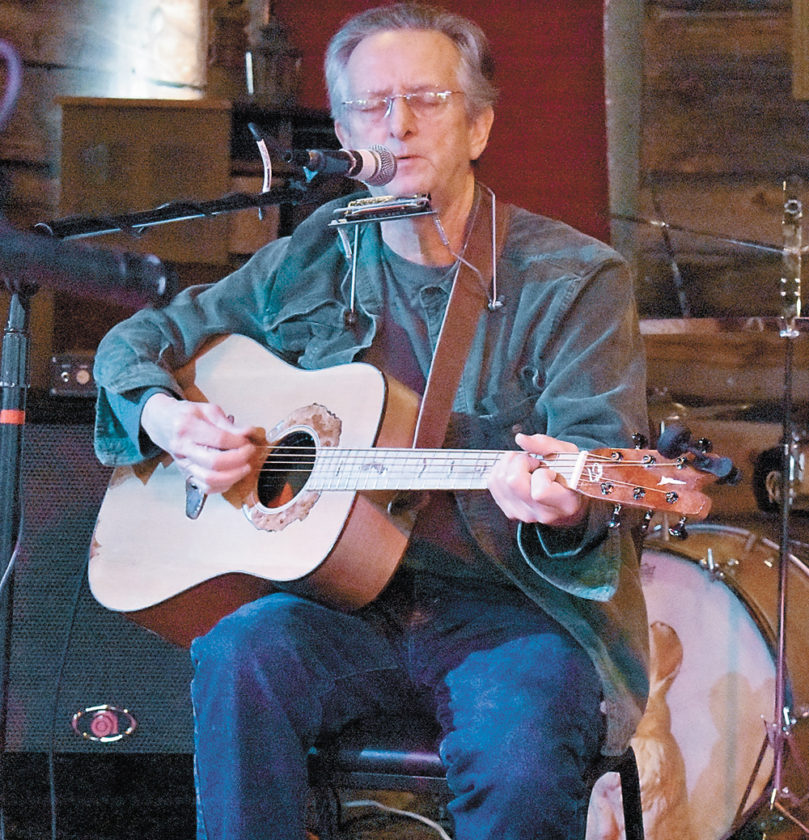 Eric Bright of BassRock Guitars in Schroon Lake plays one of his homemade instruments during January Jams at the Recovery Lounge in Upper Jay. (Enterprise photo — Griffin Kelly)

The first open mic night I ventured to in my new home was at the Rusty Nail in Saranac Lake. It’s a little dive bar on Broadway. There’s a pool table in the middle of the room, a woodstove in the corner, and at the end of the bar sits one of those arcade machines with a random assortment of knockoff games and puzzles.

Behind the bar stands Kathy Shay, who will give you a free drink for performing and is secretly an amazing singer. With or without musical accompaniment, she’s a head turner.

Leading the event are Mark Palyswiat and Peter Ryan, and they’re two of the best hosts in that they keep the show moving but also give people considerable time on stage.

At the Nail, you don’t even have to ask other musicians to join you for a song. As soon as you start playing, Nigel Darrah might hop on the drums for a snare-kick-cymbal combo, Ryan will grab his bass and lay down a groove, and Peter Allen normally lets loose on a djembe or rain stick.

Palyswiat knows how to work a soundboard, so when everybody is on stage at once, it sounds tight. 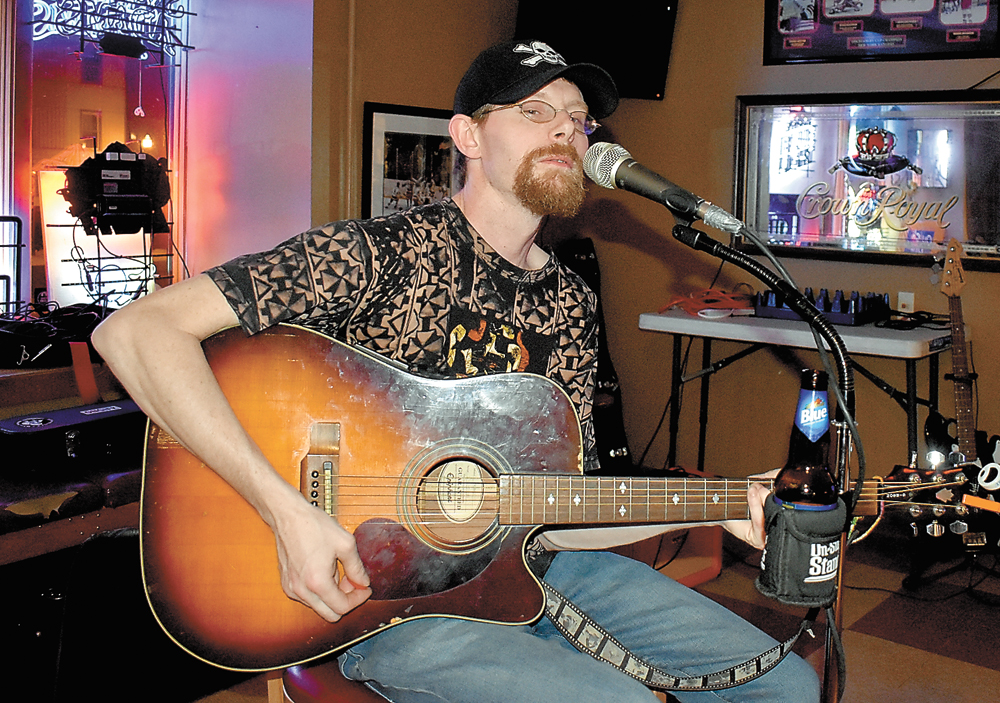 The charismatic Chris Shacklett of the local jam band Lucid is at the helm. Whether he’s slapping a bass or regaling the audience with the story from the time he had a bathroom emergency at Walmart, he keeps things pretty interesting.

I’m a rhythm guitarist and singer, and the Monopole is great because if I make an open invitation for people to back me up, immediately Ralph Senecal hops on the drums or Shacklett picks up a bass. Sometimes you get lucky and a violin or horn player shows up. I once had a saxophonist join me on stage to cover “The Weight” by The Band.

However, if you’re looking to rock out but also want to be in bed by a reasonable hour, I suggest you sign up when the event starts around 10 p.m. because the setlist can quickly fill up with jammers, who take full advantage of the “three songs per act” rule.

There’s a mental condition I and many other people suffer from in the winter called seasonal affective disorder, which is when cold weather and lack of sunlight lead to depression. How fitting that its initials are SAD. The cure is January Jams at the Recovery Lounge in Upper Jay.

Every Sunday in January, nearly 100 people grub on some spiral ham, drink local beer and listen to their neighbors play music. One of the regulars, James Coleman, thinks the event is important and said, “this time of year people get desperate for community.”

Most people tend to play Americana and folk songs here, but you occasionally get a good mix of rock, pop, alternative, rap, ambient music and tunes from the American Songbook. One of the stand out performances this year was from Emma Silverstein. Armed with nothing more than a floor tom and her transcendent voice, she offered and chilling rendition of “Subway” by the Yeah Yeah Yeahs.

Though already finished, this open mic night is always worth mentioning because it’s a series people look forward to for a whole year. Shawn Lamarche and her husband live in AuSable Forks. After she suggested going to Florida for the winter, her husband said, “No. We can’t miss January Jams.”

The best part is that the Recovery Lounge isn’t a bar or a restaurant. When the music starts, people quiet down, listen and enjoy.

It’d be hard to hit all of these in one night, so you’ve got to plan your month in advance.

At Delta Blue in Lake Placid every Wednesday at 9 p.m. Gordy Sheer is amazing at drums and knows pretty much every song you suggest. Like the name of the bar, people tend to play blues and Americana music.

The Shamrock in Gabriels bluegrass jam takes place Wednesdays at 8 p.m. This one isn’t really an open mic night, but it’s just as fun. It’s actually a group of fiddle, mandolin, guitar and banjo players, taking turns choosing tunes and soloing. It may push you out of your comfort zone, but that’s a good thing.

Romano’s Saranac Lanes in Saranac Lake has an open mic night every three weeks on Wednesday. It can get a little confusing, figuring out when that third Wednesday is, so it’s best to call ahead. The host, Jason Hamilton, knows his stuff when it comes to speakers and microphones, so you don’t need to strain your voice or fingers when performing there.

There’s also open mic nights I haven’t been to yet. P2’s in Tupper Lake hosts an open mic on the third Thursday of each month. BluSeed Studios in Saranac Lake used to have them more regularly, but they’ve since cut back to maybe one or two a year because so many other places started hosting open mic nights.