A half-century of hairdos 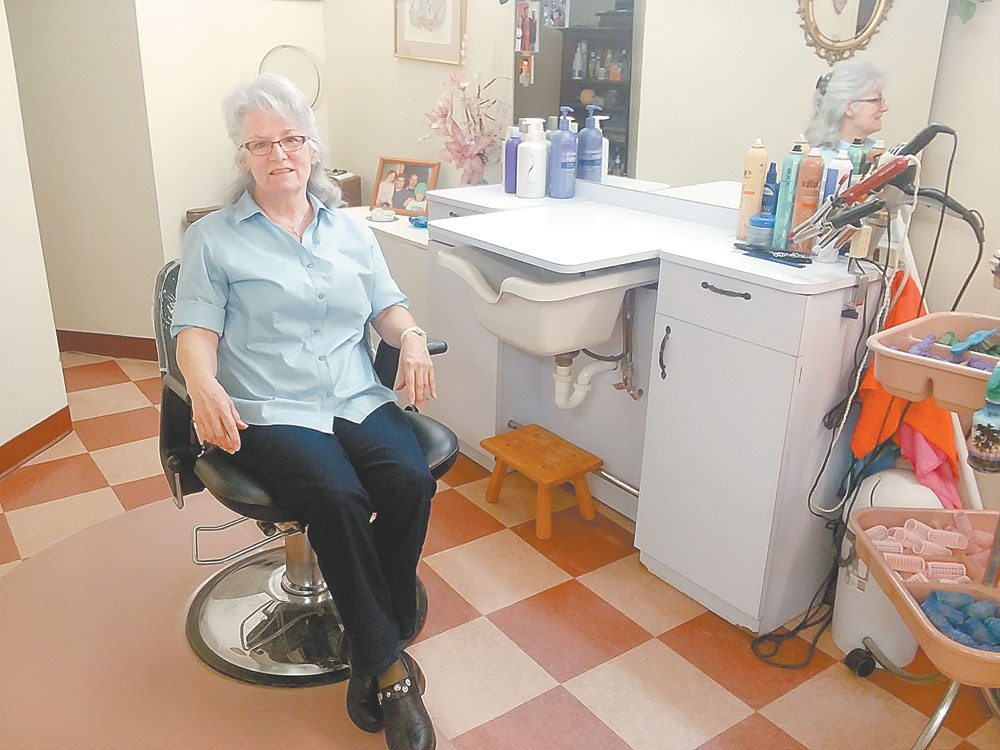 SARANAC LAKE — Almost 20 years after she opened Senior Set Hair Care inside Saranac Village at Will Rogers, Donna Buckley is ready to retire.

Buckley has been cutting hair for 50 years since she graduated from the Harper Method Beauty School in Rochester. She used to work at Maurice’s in downtown Saranac Lake.

“I worked there probably 25 years,” said Buckley. “I brought many of my customers from there.”

Buckley had seen an advertisement announcing the creation of a senior living center at Will Rogers, including the need for a hair salon. She had worked a lot with older people, and she jumped at the chance.

“I didn’t know it would be two years before they opened,” she said. “Two years later, they contacted me and said, ‘Are you still interested?'”

Looking around her clean little shop, Buckley smiles. “I did the whole thing myself.”

Even the wallpaper pattern trim looks fresh, as if she’s only just put it up.

“I did used to have my own shop in my home,” she said. “Mostly I’ve worked for myself.”

Buckley’s parents are from the area, and she went to middle school in Saranac Lake. She graduated high school at Colton-Pierrepont, south of Potsdam. Although people have asked her if she plans to move away, she has no plans to leave.

“Why would I go away? Everybody comes here for vacation,” she said. “It’s beautiful.”

She hopes to spend more time working on her yard and garden, and maybe do some more knitting and crafts. Standing erect and cutting hair all day does take a toll, however, and she hopes her hands will be more flexible after some time off.

Meanwhile, she’s looking for a buyer for the business.

“It’s a turnkey business. Everything is set up — she could just walk in Monday morning and start,” said Buckley. “I’ve got six months’ supplies in the back.”

Customers are hoping for a smooth transition, but a few are panicking. “One guy in particular, I’ve been cutting his hair since he was 13, and now he’s a big guy in his 40s. Nobody else has ever cut his hair, so he’s going to try another person while I’m still around. He said that way if they mess it up, I’ll be here to fix it.”

Over the years, many people have turned to Buckley to fix home haircuts and mistakes. “You can always fix it to be livable until it grows out,” she said. “As long as it’s not too short, you can fix it.”

In her 50s, Buckley went back to school at North Country Community College to get her associate’s degree in cosmetology. Over the years, she’s seen a lot of changes in hair cutting.

“Another big change is men. Fifty years ago it was illegal to cut men’s hair in a women’s salon. Then you had to have a separate bathroom for men and have partitions between the men’s and women’s sections. Men would call me to have their hair cut after hours.”

Hairstyles came and went, too. Although many women’s magazines advise women to bring in a photo of the hairstyle they want, Buckley said that can lead to disappointment if customers think they’re going to look like a star. Farrah Fawcett’s famous hair could be hard to duplicate, as could Dorothy Hamill’s.

“It’s not an easy thing, really,” she said. “The technical part of it is the easiest part. Communication, that’s the main thing.”

That’s something a course focused on when she went back to school. “People say, ‘I’d like my hair cut over my ears.’ Over my ears could mean the hair is cut above the ear, or it could mean it covers the ear. You have to question and question to find out what they want.”

Another lady sat through the same body perm twice before clarifying that she didn’t want a body perm but a soft curl.

“Almost any hairdresser out there has the skills to do anything they want, but you have to communicate. A lot of people don’t say what they want.”

In the end, Buckley said the secret is to listen to the customer. “They’re the one who’s paying, whose head it is.”