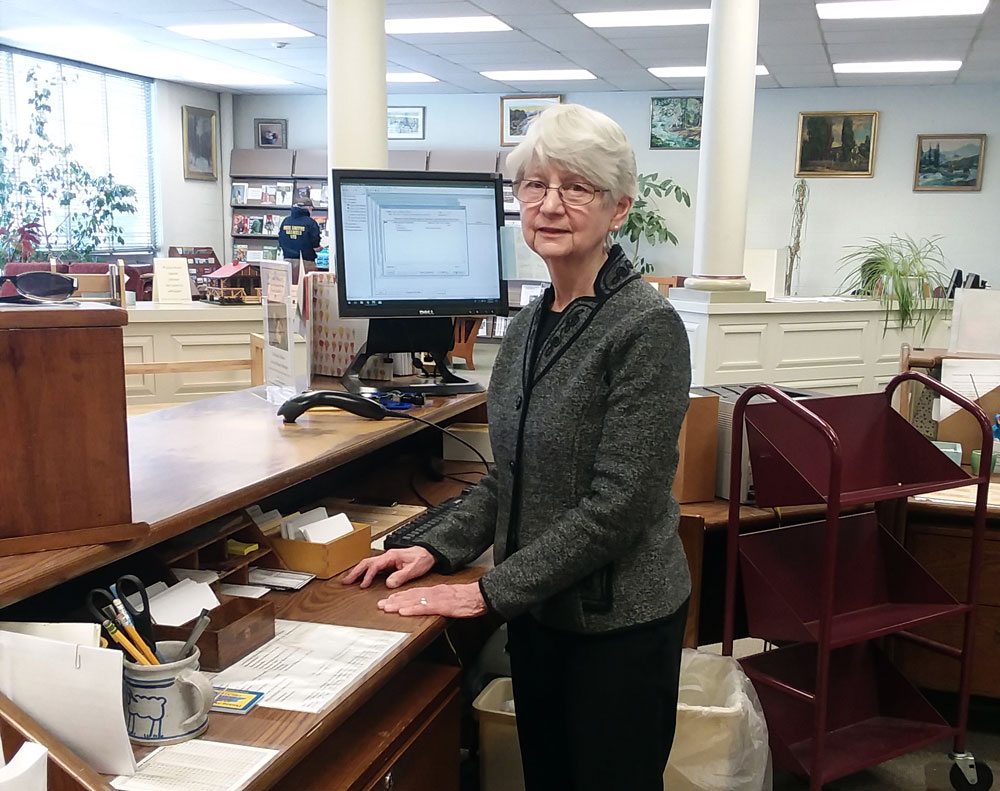 Pat Wiley came to the library after 25 years teaching English. She will retire in April. (Enterprise photo — Glynis Hart)

“Her institutional memory is fantastic,” said library director Pete Benson. “When we’re stuck on something, we ask Pat because she’ll probably know the answer.”

“Very few people have given as much time and effort as Pat has to this library,” said Benson. “We’re all going to miss Pat.”

Wiley, who was hired as library assistant in 1996, spent 25 years before that teaching at North Country Community College. She served on the library board from 1980 to ’85.

“I’d always been a teacher and never thought about working in a library,” she said. “But my mother was a librarian. When my children went to St. Bernard’s school I coordinated the library there, so I actually had quite a bit of experience although I didn’t have a library degree.”

Wiley is such an integral part of the library’s functions it’s hard to pin down everything she does.

“It’s a conglomeration of tasks,” she said. She’s enjoyed the variety of tasks she gets to turn her hand to, and she said the library, despite its requirements for low voices, is quite a busy place.

Among the many things that Wiley does, preparing the Library Notes monthly newsletter is one she’s especially enjoyed. “I think the photo is really important, too. I take the photo. Usually if you don’t have time to read the whole Library Notes, hopefully seeing the photo and reading the caption will give you an idea.

“I’ve worked with a lot of different editors at the Enterprise and they’ve all been great. Brittany [Proulx] has been a joy,” she said.

In the two decades that have passed since Wiley got behind the circulation desk, she’s seen a lot of changes. They used to have cassette tapes, and now they have CDs and downloadable e-books.

“I think at the time we had maybe one computer,” she said. Another big change was going to the automated checkout system around the year 2000. That required placing barcodes in all the books. Marilyn Riotto barcoded most of the collection. Wiley and other staff helped finish the job.

“It certainly has speeded things up,” she said.

Another marvel is the growth of the interlibrary loan services, which enables libraries to share materials so patrons can find a book online in any of several libraries, and request the book so they can check it out locally. The Saranac Lake Free Library is one of the three bigger libraries in the Clinton Essex Franklin Library System.

“The ILL is just amazing. We get two vans a week; it’s very labor intensive,” said Wiley. Books have to be processed at the library they’re coming from, checked into the destination library, then checked out. When the books are returned, they go through the whole process in reverse.

“When you think about it, it’s amazing that a tiny little library like this one can get anything. Anything. But that’s what libraries are supposed to do: provide books for everybody.”

From 2003 to 2004, the library underwent a major renovation. But before the renovation, a huge fundraiser had to happen. The board and fundraising committee devoted themselves to raising the money, a whopping $750,000, and working with the architect to transform the library. It needed an elevator, which required major work.

That turned out to be a good thing, said Wiley. “The top half of the old museum is now our children’s room, and it worked out well.”

Instead of the wildlife collection only being open part-time during tourist season, it is now housed behind glass in a room where anyone can come view it during library hours.

“Another part of the renovation is this sitting area [at the front],” said Wiley. “It has created a lovely feeling in the library, almost as if you’re in a friend’s living room.”

The Betsy Whitefield room, where patrons can shut the door and have a private conversation, is another addition. This one came about after Whitefield, who was the library director before Benson, passed away from cancer. Donations in her memory went toward the creation of the room.

Although Wiley is still working out what she’s going to do with her time, she’ll still be a presence in the library as she continues working in the Adirondack Research Room on a volunteer basis.

She’s enjoyed her co-workers immensely. “Our desks are right near one another, yet we all got along so well. We believe in what we’re doing and most importantly, we all have a good sense of humor. It makes working here extremely fun.”

“One thing that has stayed the same,” she said, “is most people who come to the library are wonderful. Dealing with the public is, on the whole, an extremely positive experience.”