Planet-saving one scene at a time 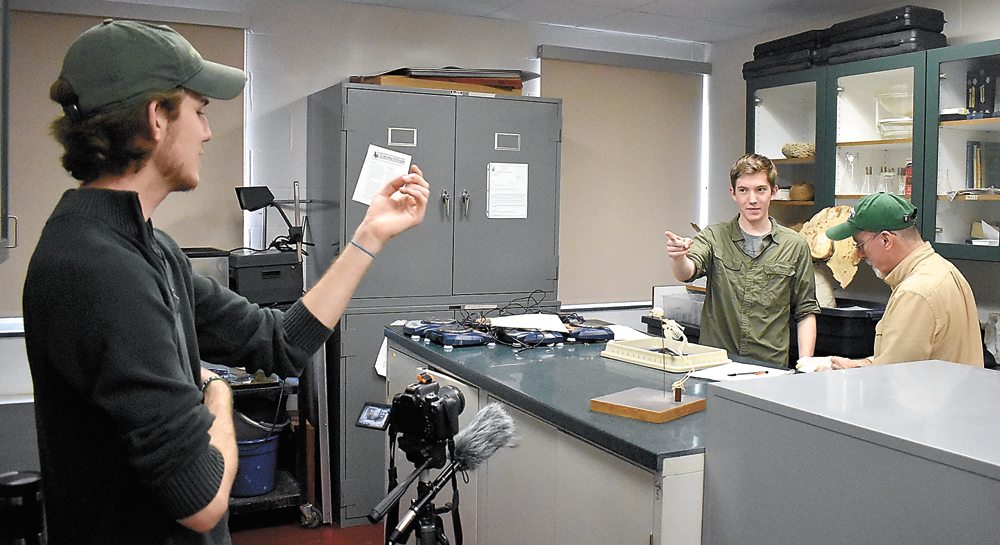 PAUL SMITHS — The Justice League just got done defending the Earth from alien invader Steppenwolf, and the Avengers will battle the mad titan Thanos this May. This is all in movies, of course. But in a world where 16,306 animals are on the endangered species list and sea levels rise at a rate of 3.2 millimeters per year, Gavin Shwahla proves it doesn’t take powers to be a superhero.

Shwahla, a Fisheries and Wildlife Sciences major at Paul Smith’s College, hopes to educate audiences on the importance of fighting for the planet with his upcoming short film “Gavin Wild.”

The film follows the titular college student as he discovers a new species of bird, but the first one he finds is dead.

On the day the Enterprise visited the film set, Shwahla and his co-director and “right-hand man” Jake McCourt were shooting in the school’s ornithology lab. They used digital cameras on tripods with external microphones electrical-taped to the legs.

“Filming on a budget of zero dollars, you run into some problems,” Shwahla said lightheartedly. 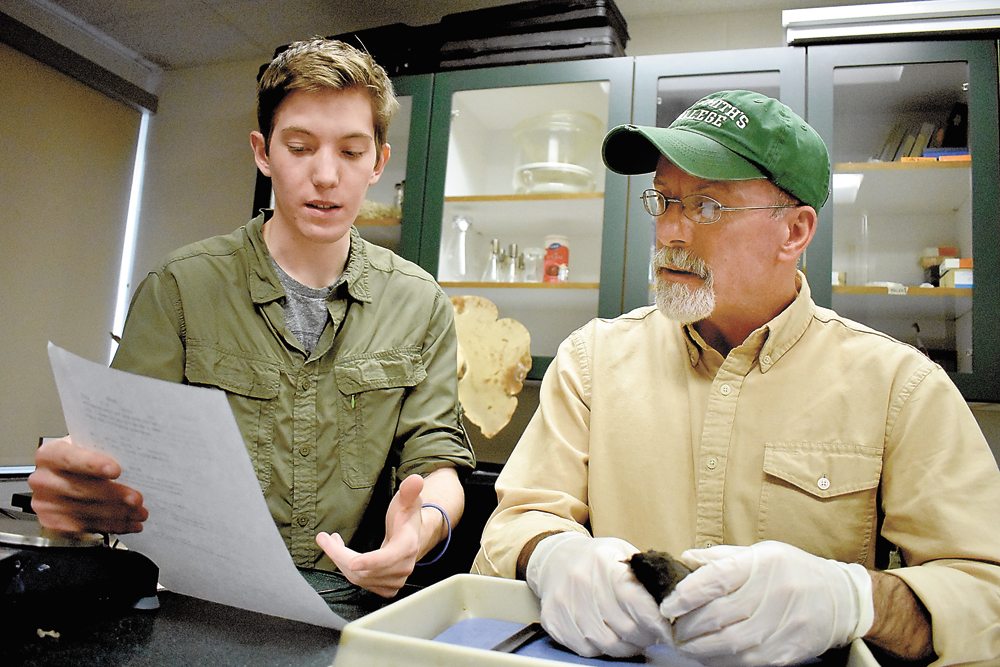 In the lab, metal lockers contained multiple drawers of taxidermied loons, ducks, hummingbirds, crows and red-tailed hawks. It was pretty much a bird morgue. Using a Revlon hair dryer, McCourt warmed up a stuffed dark-eyed junco so it would be malleable for its big scene. Shwahla colored its breast and wings with a blue Expo marker.

As a disclaimer, Shwahla said no birds were harmed in the filming of this movie. The junco died of natural causes, and the Expo marker washes off.

“It’s birding, and I love birding,” McAllister said. “To hear of a student who loves birding and wanted to make a film, it’s just great.” 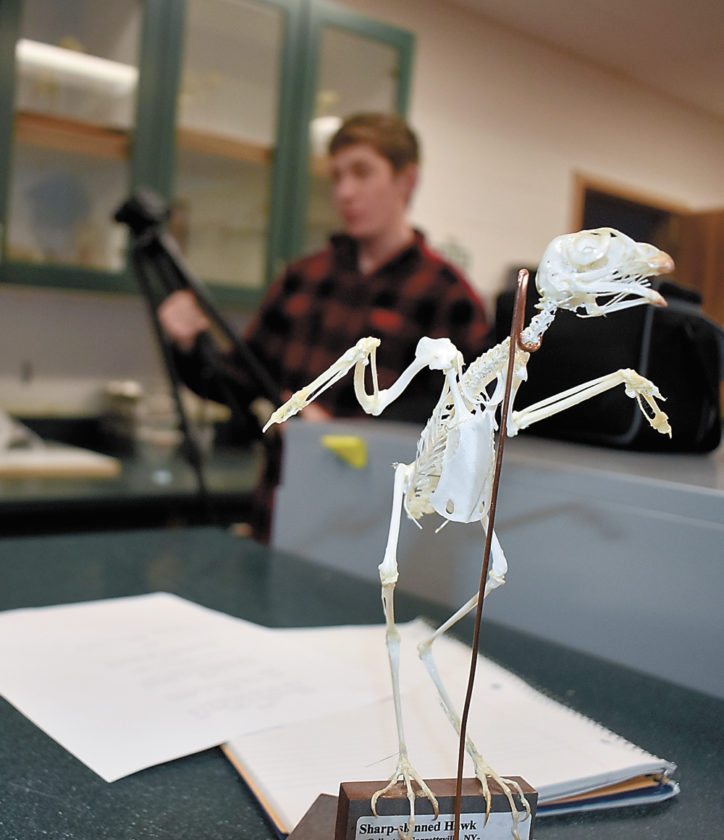 Shwahla and McAllister read their lines a few times, but a standard series of bloopers ensued, followed by comical bursts of light profanity. Even on the takes without any errors, Shwahla strove for the most real and perfect cut.

As the movie continues, Gavin Wild is unsuccessful in acquiring grant funding for research and takes it upon himself to track down more of the unknown avian, but things turn sinister.

“It goes sideways from there,” Shwahla said not wanting to spoil to the plot.

At the center of the film is Gavin Wild, a hero persona who strives for a safe planet. 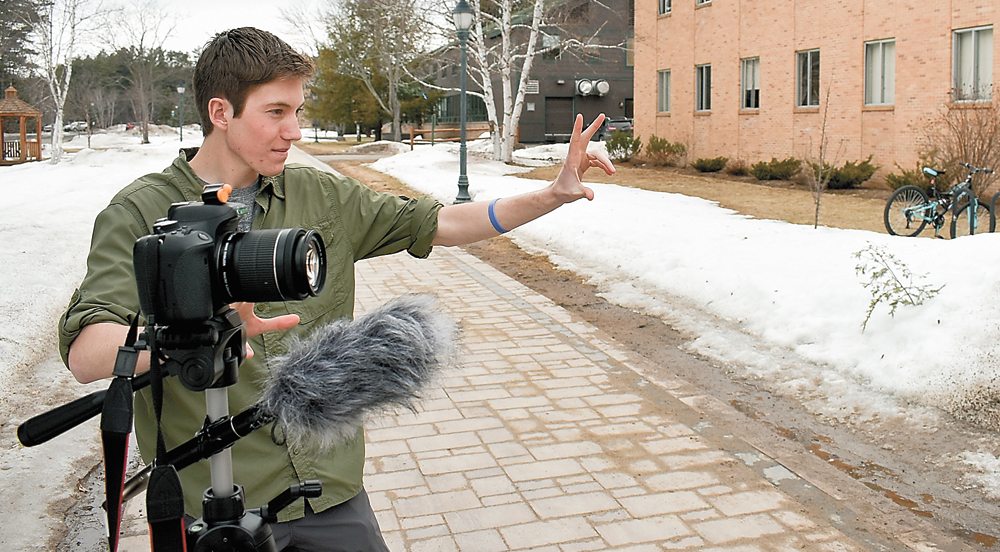 Gavin Shwahla grew up wanting to save the planet. One of the ways he advocates for a greener earth is through educational and entertaining films. (Enterprise photo — Griffin Kelly)

“It’s a nickname and a character,” Shwahla said. “I’m big into comic books and superheroes, and I was like, ‘Hey, there’s no superhero that fights for wildlife or anything.'”

After seeing Steve Irwin the “Crocodile Hunter” on TV for the first time when he was a child, Shwahla was hooked.

“The movie is all about saving wildlife, saving the planet, why it’s so important, and you really get that from the character Gavin Wild’s passion for it,” Shwahla said. “He’s a kid looking for a chance to save the world.” 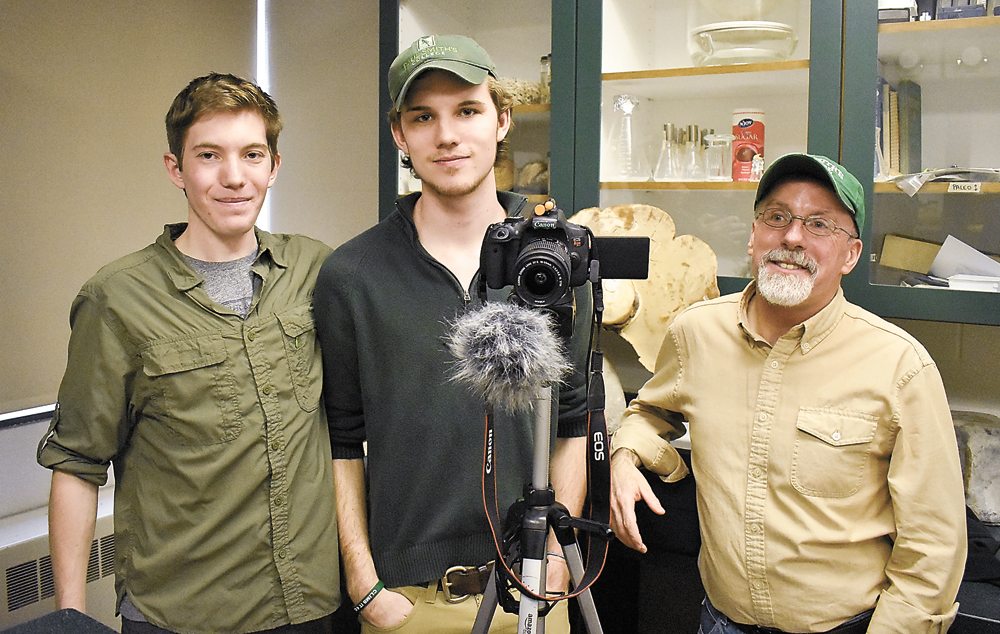 Though the character is his creation, Shwahla recognizes a distance between himself and Gavin Wild.

“Gavin Wild is my nickname, but it is not me,” Shwahla said. “It’s supposed to be a symbol. There’s Steve Irwin, and then there’s the Crocodile Hunter. [Wild] is probably braver than I am. I put my flaws and my good characteristics into him. He’s the bridge between the man that I am and the man that I hope to be.”

Millennials are a generation often associated with being lost and not living in the present. Shwahla said he’s no exception.

“I have those feelings of, ‘What does the future have for me? What am I going to do with my life?,'” he said. “I think I’m on a pretty good path. I hope so. I want to change the world for the better, hopefully. How I’m going to do that, I don’t know. He’s definitely an inspiration to me, and I hope he’s an inspiration to the world.”

In high school, Shwahla made “The Garnet Gull,” a short film that follows Travis Finch, a high school student from Point Pleasant, New Jersey, who grows metal wings after accidentally exposing himself to a top-secret serum his teacher concocted. Finch takes on the alter ego of the Garnet Gull, a nod to the school’s mascot.

“It’s good, but it’s not great,” Shwahla said chuckling. “I’m proud of it. We showed it to about 150 people in a film festival we had at school, and the response was overwhelming.”

Shwahla said both films share a continuity, similar to the Marvel and DC universes. “The Garnet Gull,” even features a mid-credit scene teasing to a much larger-scale team movie akin to “The Avengers.” Whether the Garnet Gull or the top-secret serum will make an appearance in “Gavin Wild” remains to be seen.

Shwahla said he loves the superhero films he draws from, but he thinks comic book blockbusters are over-saturating the world of cinema.

“They are getting a little tiring; I won’t lie,” he said. “The Marvel movies, as much as I enjoy them, they do get repetitive. They’re fun, but they’re not ‘Citizen Kane,’ but I always say they could. Why can’t a superhero movie look like a Tarantino movie? I like the superheroes you don’t know in comics like Indiana Jones or Luke Skywalker.”

He said “Gavin Wild” is “the movie that I got into filmmaking to make. Obviously, I’d love a Hollywood budget, but that doesn’t come easy. I think, now more than ever, a movie like this needs to be out there. It’s a very personal story to me that I was trying to tell. Gavin Wild is supposed to be more of an idea, like anybody can be Gavin Wild. You’d don’t have to be a superhero to save the planet.”