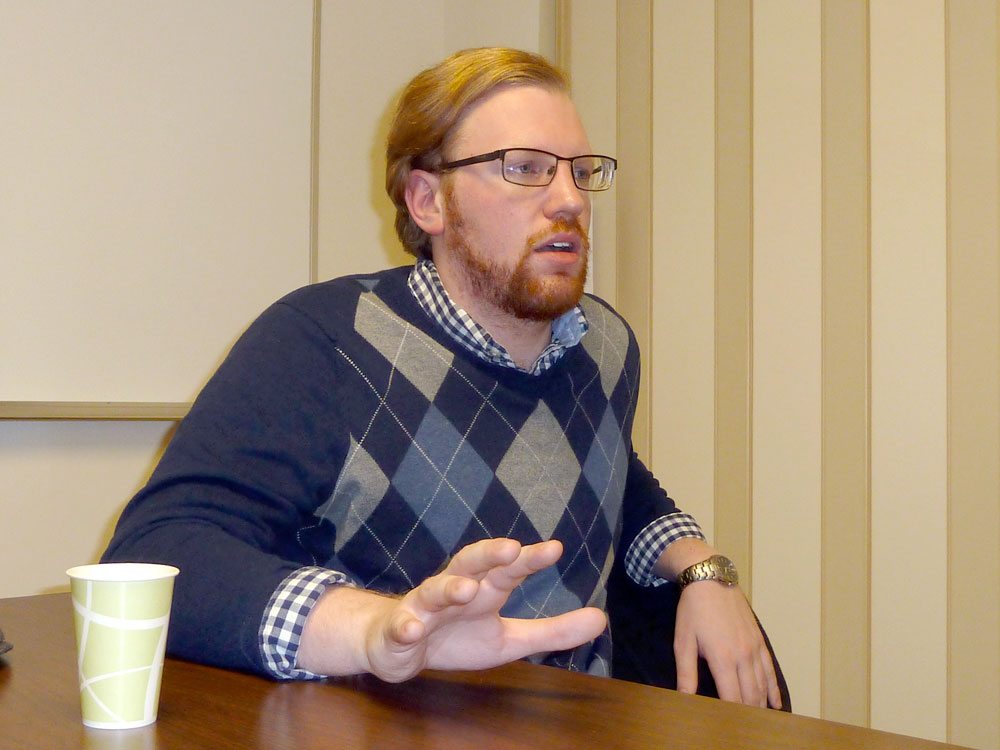 Patrick Nelson speaks during an interview in November 2017 at the Enterprise office. (Enterprise photo — Peter Crowley)

(Editor’s note: This is part of a series of profiles of the many candidates running to represent New York’s 21st Congressional District.)

The youngest member of New York’s 21st Congressional District race has been running the longest.

Twenty-eight-year-old Democratic candidate Patrick Nelson, of Stillwater, announced his bid for Congress on Jan. 19, 2017, the last day of Barack Obama’s term in the White House. Even before Rep. Elise Stefanik took the oath for her second two-year term, Nelson became her first challenger to enter the race.

Now, over a year later, he continues to run on a vision of a government that shrugs off corruption and works for citizens’ freedoms and opportunities.

Nelson worked on former New York 21 candidate Aaron Woolf’s campaign and as a delegate for 2016 presidential candidate Bernie Sanders. In 2016 he was a field director for Democratic NY21 candidate Mike Derrick. Losing the election to Republican incumbent Stefanik on the same day President Donald Trump was elected was made worse when he had to shut down the campaign offices after losing, which he said is the saddest part of a field director’s job.

After spending time in a “couch burrito” following the election, Nelson got involved again, offering “strike support” for Momentive Performance Materials workers striking for a unity contract at the chemical plant in Saratoga County, where he lives. During the 105-day strike Nelson brought workers food, hand warmers and even scraps of his church’s old floorboards to keep their burn barrels going.

Doing this work energized him again as he started talking with friends over beers about what kind of campaign he would run if he was a candidate. He said he wants to run on small donations with a focus on digital media and a desire to talk about partisan issues like an adult.

Nelson said there is always common ground to be found between people, and that he does not like issues such as climate change treated like “political footballs.”

One of the issues he believes should be treated with bipartisan tact is health care. While there is a lot of debate about how to solve it, he said he believes he can find common ground with anyone on the fact that the current system is flawed and needs changing.

He said the U.S. spends the most on health care per capita out of any country in the industrial world — $10,000 — while countries such as France, which covers all citizens, spend around $4,400.

More people in the system, he said, increases negotiation strength and eliminates corporate bureaucracy. He said doctors offices are just billing practices that happen to practice medicine, that the system is wasteful and that since the law of supply and demand does not apply the same to health care, it does not work as a free market.

“The free market in health care is sort of a special area where it is not functionally able to control price,” Nelson said. “[Voters] understand that you never see a sale on open heart surgery, you don’t see ‘get three valves, the fourth is free.’ If you don’t need the procedure, if you don’t need the health care, you are not going to go seek it. The amount of demand that we give a health care procedure is a function of the people that need it, not a function of the price. You could raise the price 10 times, and the amount demanded would be about the same.”

Nelson was critical of Stefanik’s approach to environmental policy, calling it “superficial” and saying though she says she cares, her statements have no beef.

If she wanted to make environmental change, he said she would support H.R.3671, the “Off Fossil Fuels for a Better Future Act,” which resolves to completely transition away from fossil fuel energy by 2035. Though this would be an expensive and complicated shift, he said the funds already exist.

“The way we pay for that is by taking away the massive subsidies that we’re giving away to fossil fuel companies,” Nelson said. “You couldn’t justify, in the ’60s or ’70s, giving away massive subsidies to the tobacco companies, so why are we giving them to the fossil fuel companies that are doing for our environment what the tobacco companies were doing for our lungs?”

Nelson wants to apply the same method of budget reorganization he suggests for fossil fuel companies to the military, the nation’s largest annual expense. He said the Pentagon has misplaced trillions of taxpayer dollars funding projects like the $1.5 trillion F-35-fighter. In his words, the F-35 combines A-10 “Warthog” and F-16 planes with stealth and vertical takeoff technology. He said this new aircraft is not serving its job as well as the planes that have been used for 40 years, but that it keeps going because its parts are made in 48 states and the majority of congressional districts.

Without taking money from military contractors, corporate PACs or lobbyists, Nelson said he will have the freedom to ask, “Is this the best way we can spend our money?”

He proposed cutting the military budget, not in defense, salaries or veteran care, but in “national offense” and in projects that pay dividends to the contractors who fund politicians’ campaigns.

Nelson said veteran services is one of the reasons he initially got into politics, and that he wants to fill the 49,000 vacant positions in the Department of Veterans Affairs.

A graduate of Rensselaer Polytechnic Institute in Troy, Nelson said he holds thousands of dollars in debt through student loans, much like many of the nation’s future leaders and innovators. He proposed an incentive program for people with student loans who want to start businesses, creating new companies, jobs and technology.

He said there are loan forgiveness programs for rural doctors, attorneys, nurses and social workers, but none for business owners and entrepreneurs.

Nelson also said he wants to help people avoid falling into the “welfare trap,” where it becomes more profitable for someone to receive state aid than to find employment. He said public benefits should taper off as those that receive them earn more money.

“You should never be in a situation where an additional dollar of income costs you more than a dollar’s worth of benefits,” Nelson said.

On a related note, Nelson also wants to raise the minimum wage to push back against wage suppression. He said wage suppression does not happen because of malevolent employers, but because businesses make more money the less they pay their employees. He said this is an example of people making smart decisions that benefit themselves but collectively compromise the system.

“The state is there to solve the problem that smart, individual decisions can be collectively disastrous,” Nelson said. “It’s overfishing the pond. As an individual it makes sense for me to get as much fish out of the pond as I can. But if you’re doing it, and everybody else is doing it, sooner or later there’s no more fish left. Our government exists in a situation where we come together and say ‘Hey, nobody take more than X fish from the pond so that we never overfish the pond and we can all keep doing it.'”

Though Nelson has been critical of Stefanik and Republican ideals such as “trickle-down economics,” he was also critical of the Democratic Party, saying it has lost touch with its roots as a “party of the people” and sold out to corporate money.

Nelson has sworn to not take corporate money and said he wants to set an example in Congress for other politicians to follow.

(Corrections: An earlier version of this article incorrectly gave Nelson’s age as 29; it is 28. Also, the earlier version incorrectly said he used scraps of his church’s old carpet to fuel strikers’ burn barrels; he actually used scraps of his church’s old floorboards, which had been replaced. The Enterprise regrets the errors.)