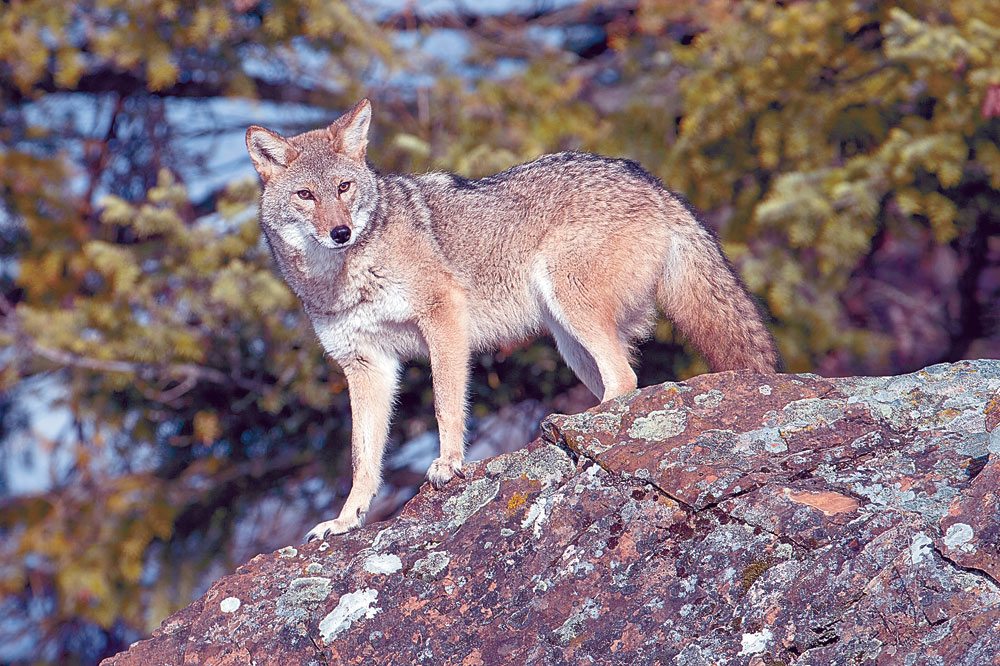 Coyotes, like this one seen in Montana, will be rearing pups and setting up dens this month in the Adirondacks. (Photo by Larry Master, www.masterimages.org)

The state Department of Environmental Conservation is offering homeowners tips on avoiding conflicts with one of the Adirondacks’ most ubiquitous predators.

The DEC says eastern coyotes will become more aggressive as they stake out territories and den spots, readying themselves for spring when pups will be born and reared.

Coyotes are an extremely versatile species, eating pretty much anything they come across. However, with the onset of pup-rearing, the DEC says homeowners should take steps to avoid attracting coyotes.

The DEC said in a press release that pets should never be fed outside and that garbage should be secured. People should keep an eye on bird feeders as well, as the concentration of birds, small mammals and seed can be an attractant.

In addition to limiting food sources, cats and small dogs should be kept inside, especially at night.

“The Eastern coyote can be found in rural farmlands and forests, and occasionally in populated suburban and urban areas,” the DEC said in a release. “In most cases, coyotes avoid people as much as possible. In fact, coyotes can provide many exciting opportunities for New Yorkers.

“However, if coyotes learn to associate people with food (such as garbage or pet food), they may lose their natural fear of humans, and the potential for close encounters or conflicts increases.”

The department says an occasional coyote sighting should not be cause for concern, but repeated visits from the animals should be reported to local law enforcement and the DEC.

“If you see a coyote, be aggressive in your behavior – stand tall and hold arms out to look large,” the DEC cautions. “If a coyote lingers for too long, then make loud noises, wave your arms, and throw sticks and stones.”

Coyotes will eat anything from berries to deer, and their food source often depends on the season, according to the DEC. During the summer and fall, coyotes largely eat berries, insects and small rodents — such as moles, mice and voles. However, as winter wears on, they often shift to their largest prey, white-tailed deer.

The SUNY College of Environmental Science and Forestry conducted a study during the winter of 2008-09 that found coyotes were eating a lot of deer but were rarely responsible for the deer’s deaths.

“During the winter, only 8 percent of adult deer had been killed conclusively by coyotes,” the DEC reports on its website. “The remaining 92 percent were scavenged by coyotes after being killed by vehicles and other injuries. The adult deer that were killed by coyotes had severe preexisting injuries and were likely to die from other causes in the absence of coyote predation.

Coyotes mate for life and often maintain the same home range, though they may venture further afield looking for food. The DEC says coyotes typically have four to six pups after mating in January. The pups are born in late March or early April and are full grown at about nine months old. After that, they will be driven from the den and set out to find their own territory. The DEC says young adults will travel anywhere from 50 to 100 miles in search of a territory.

SUNY ESF estimates that there are more than 14,000 mating pairs of coyotes in New York, and although there is some debate as to how coyotes became established in New York, the DEC says the animals aren’t going anywhere.

“The second and more widely accepted hypothesis is that Eastern coyotes are a relatively new species in New York,” according to the DEC. “This explanation suggests that coyotes originally inhabited central North America and naturally extended their range throughout the continent in response to human changes to the land.

“Evidence indicates that coyotes reached New York and the Northeast in the early 1930s and 1940s, with coyote range expansion first reaching the state by passing north of the Great Lakes and into northern New York. Coyotes then spread rapidly across the state over the next 40-50 years.

“They are here to stay.”

For more information on coyotes, go to www.dec.ny.gov/animals/9359.html.