Another radio revival in the works

Lake FM, run by a European couple, may go from web to 102.1 FM if FCC approves foreign ownership

Hanna Kaleta, left, of Poland and Ricki Lee of the United Kingdom are the couple planning to restart Tupper Lake’s WRGR 102.1 as Lake FM. (Photo provided)

This temporary studio in Hanna Kaleta and Ricki Lee’s Saranac Lake apartment is where WRGR 102.1 Lake FM is streaming online from, until the station gets cleared by the Federal Communications Commission. (Photo provided) 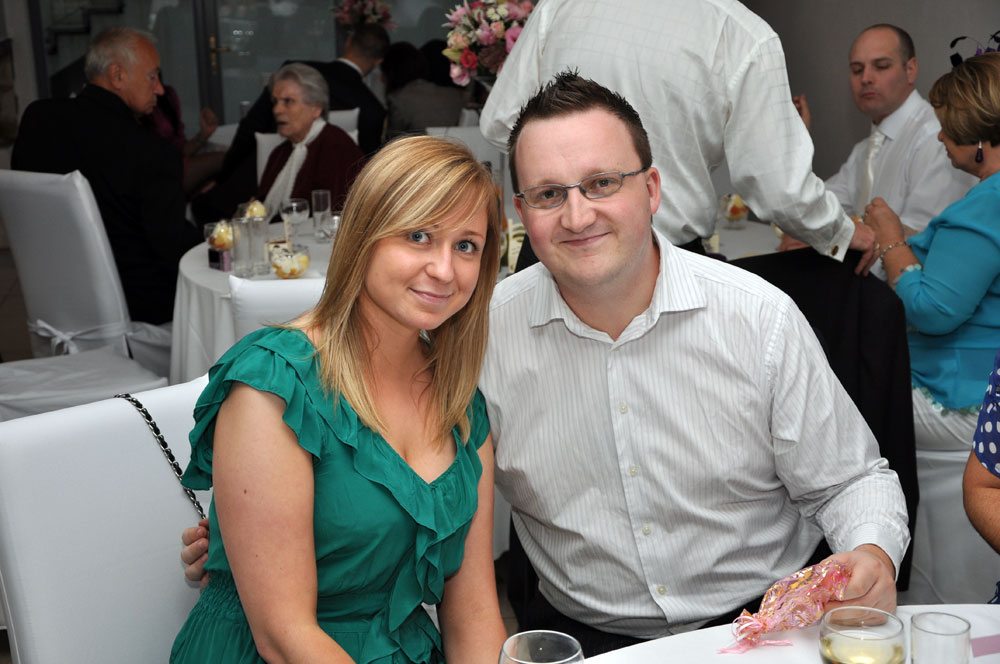 Hanna Kaleta, left, of Poland and Ricki Lee of the United Kingdom are the couple planning to restart Tupper Lake’s WRGR 102.1 as Lake FM. (Photo provided)

After several months of dead air, WRGR may return to the airwaves of Tupper Lake and Saranac Lake at 102.1 FM, thanks to a European couple with a love of radio and the Adirondacks.

Ricki Lee Shorthose, who goes by just Ricki Lee professionally, excitedly talked about his 20-year radio career at the Enterprise office Monday: from his start at the bottom, writing down soccer scores for free, to programming, running and owning stations in the United Kingdom, his home country. He said the 102.1 station, rebranded as Lake FM, will play hits from the 1960s through the ’90s and feature a morning show, afternoon music show and a locally focused entertainment show for the evening drive.

“For me, there’s nothing better than entertaining people, informing people and seeing their delight,” Lee said.

Since the five stations formerly owned by Ted Morgan’s Mountain Communications fell silent, several radio entrepreneurs have been buying up the stations and bringing music and content back to the air. A group of radio veterans bought 106.3 FM and the WNBZ call letters for $300,000 and are now broadcasting from Plattsburgh. The owners of WSLP of Lake Placid bought the 1240 AM frequency, long associated with WNBZ in Saranac Lake, for $6,000. And now Lee and his wife have bought WRGR for $8,000, under the company name Border Media, according to several broadcast industry media.

However, Lee and his wife Hanna Kaleta, from Poland, need to petition the Federal Communications Commission to let them, as non-U.S. citizens, own a radio station. They have lived in the country full-time since 2015 and have E-2 Treaty Investor visas, but the Communications Act of 1934 prohibits non-citizens from owning more than a portion of a radio station’s stock. 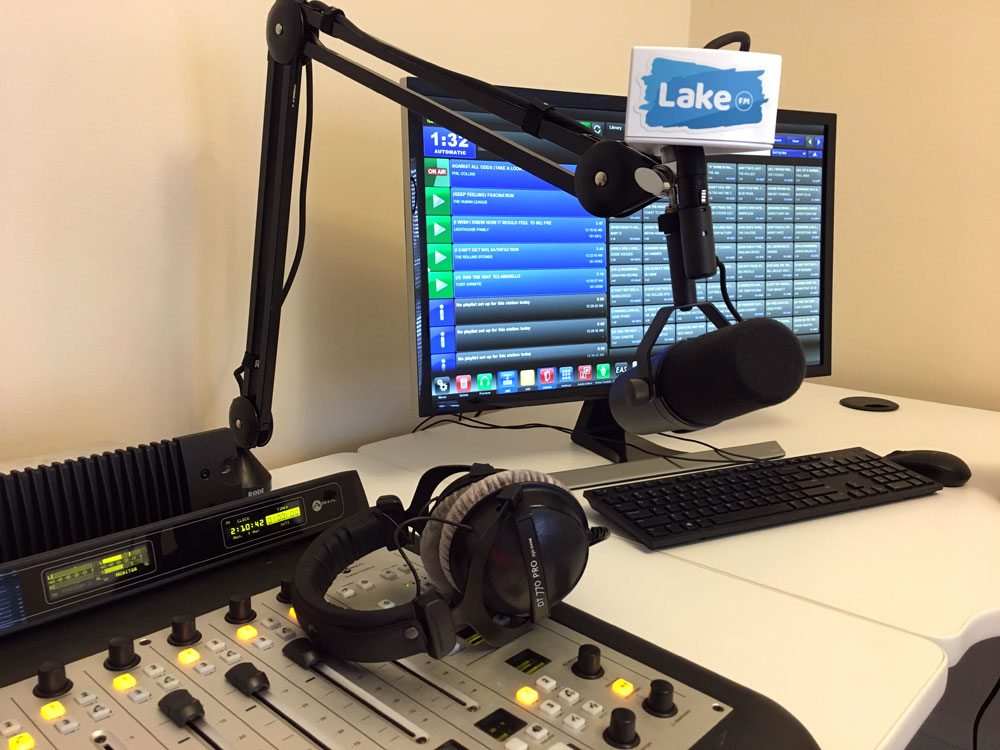 This temporary studio in Hanna Kaleta and Ricki Lee’s Saranac Lake apartment is where WRGR 102.1 Lake FM is streaming online from, until the station gets cleared by the Federal Communications Commission. (Photo provided)

President Donald Trump’s FCC has generally loosened broadcast media rules, and in February 2017 the agency let two Australians take over four radio stations in Texas. That was “the first time it has allowed 100% foreign ownership of the parent of broadcast licensees, at least outside of one-off waivers — the FCC allowed NewsCorp., also Australian, to buy its (Fox) TV stations in the 1990s,” according to the industry magazine Broadcasting & Cable.

Lee said he is more likely to play Madonna and Billy Joel than anti-American propaganda. He expects to receive the “all clear” from the more relaxed FCC in six months or less. After that, he hopes to start broadcasting with new equipment from the tower on Mount Morris within 60 days.

Until then, they are streaming “The Tri-Lakes’ Greatest Hits” on their website from a small studio in their apartment.

Lee and Kaleta split their time between apartments in Brooklyn and Saranac Lake. He said they have been visiting the North Country, returning for outdoor adventures and relaxation.

“When you live in a big city, it’s easy to forget that there’s green space available in this state,” he said.

He said he likes that Saranac Lake is not a “tourist town,” saying it has the architecture and sense of community of a city without being one. He and his wife want to be a part of that community and contribute by bringing music, information and voices from the area to the air.

Lee said Tupper Lake has been neglected radio-wise since Mountain Communications’ stations went quiet in the past year.

WRGR was named for Roger Jakubowski, a New Jersey hot dog millionare who bought land, radio stations and ski mountains in the Adirondacks. After he went bankrupt, the station was run by the Nardiello family from Lake Placid, simulcast with WLPW 105.5 from Lake Placid, before being sold to Morgan, who changed the title to Rock 105 and the format to classic rock. In its last days the station was simulcast with WNBZ’s signal until it stopped entirely in November 2017.

After finally getting in contact with Morgan’s broker and legal firm overseeing the sale of the stations, Lee said they couldn’t pass on the opportunity to own a local station and explore the creativity of the community.

He said he wants Lake FM to be truly local, with listeners voting on what they want to hear, giving opinions about music and events creating content for the station. He said if someone wants to produce a podcast, showcase local talent or suggest music to play, he will listen to any idea.

“We want this to feel like it’s owned by the people,” he said.

Lee said he has an eclectic taste in music. Though his favorite era is the 1980s to early ’90s, he loves to introduce listeners to songs new and old.

Lee remembers hearing DJ Sammy’s trance hit cover of Bryan Adams’ “Heaven” while on a family vacation in 2003, before it had been introduced in the UK. He played it on air for a dance music show when he returned, saying it was going places. That version of “Heaven” has now been certified platinum by the British Phonographic Industry, and Lee received a gold record from the record label.

Lee knew he wanted to be on the radio since sitting in the back of his parents’ car on a trip home from the mall, hearing a top-40 DJ introducing the latest hit songs.

“I remember turning around to my [high school] career adviser and saying that I’d like to be a radio presenter, and he turning around and going, ‘Well, that’s very good, but those jobs are very rare, so maybe you should think about something like,’ and he quite literally said to me, ‘a mechanic, because they’ll always be cars,” Lee said, “and from that day forward I wanted to prove that guy wrong.”

Lee set a goal for himself: Present one radio show before he dies. He got his chance at 16 years old.

“I decided I wasn’t quite ready to die at 16, so I clearly needed new goals,” Lee said. He said he could not see himself doing anything else. “As my wife says to me, ‘What if you sat for 10 minutes on a beach and you bought the house that you want to buy, and you figure out that (A) you don’t like beaches, and (B) you’re bored? … What are you going to do with your time?'”