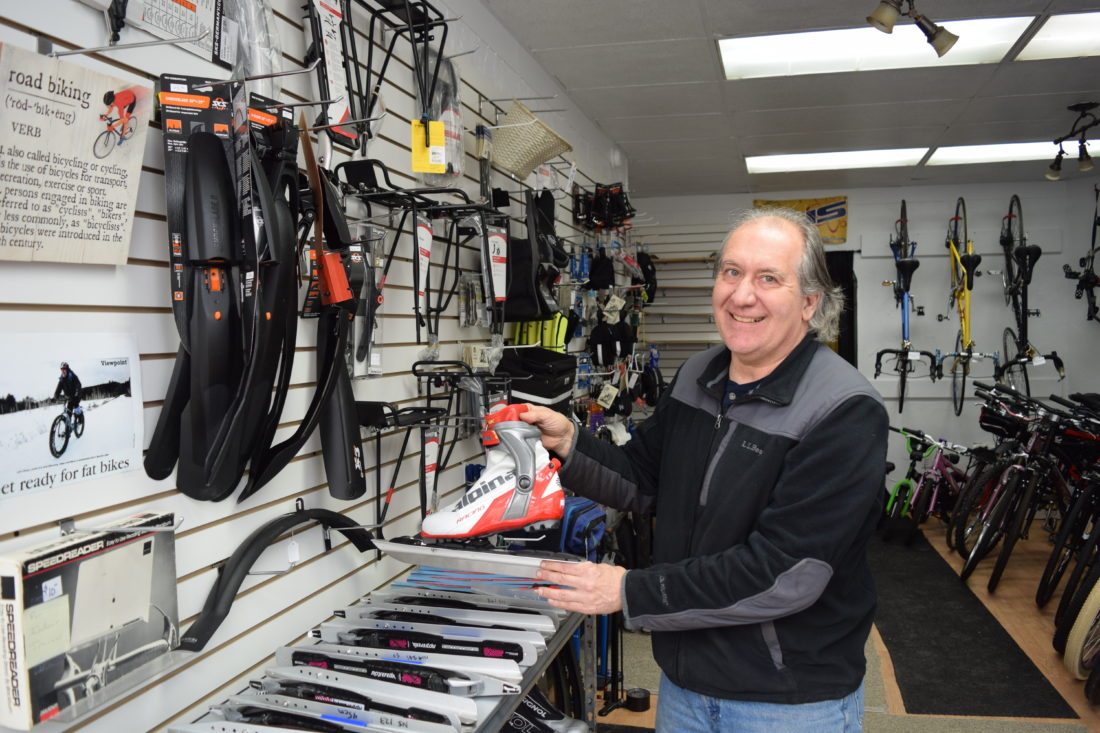 SARANAC LAKE — When the U.S. Olympic speedskaters hit the ice in Pyeongchang, John Dimon will be watching their feet.

Dimon owned the Dimon Sports Speedskating shop in Lake Placid from 1997 to 2008 and is now the owner of the Human Power Planet Earth bike shop on Main Street in Saranac Lake. He was a speedskater — briefly — himself. He still makes and sells skates.

The shop is partly dedicated to bicycles and partly to Nordic skates, which have long blades somewhat similar to those of speedskates. Hockey and figure skates are different specialties, with different blades.

“I did a lot of Category 1 skaters, some national age group champions. It’s kind of neat when you tune a blade and they set a record on it,” Dimon said.

“One of the fastest speedskaters is Mitch Whitmore in the 500 meter,” Dimon said. “I remember him when he was a little kid, racing out in the Midwest.” Dimon’s other pick for the podium is Joey Mantia, a several-time world champion. Although he’s never met Mantia, he’s got a good idea whose skates Mantia is wearing.

“He may win the new mass start event. It looks like he’s in SS boots, made by Bruce Kohen — I know him. He made boots for Apolo Ohno.”

The men’s and women’s speedskating events in Pyeongchang this year offer the team a comeback opportunity, since the team’s dismal showing in Sochi was the first time since 1984 they skipped a trip to the podium. According to some observers, that loss was at least partly caused by a change of costume: The skaters were in new Under Armour uniforms, which they hadn’t been allowed to practice in. (An exodus of skaters in 2012 who complained of abuse by coach Jae Su Chun probably didn’t help, either.)

The uniforms and the blades have become critical components in what’s been called the world’s fastest all-human-powered sport. In a sport where success is measured by tenths of a second, the U.S. team’s chances this year may be, literally, on a knife’s edge.

“There was this transition when a sport went from being all human-factor to being — at the highest levels — really technical,” Dimon said. In the 1960s artificial ice — using de-ionized water — cut down the friction and made skate times faster.

Another big change was curving the blades. When you compare a speedskate blade to a hockey or figure skate blade, it’s straighter and thinner: 1 mm or 1.4 mm compared to 4 mm. The wider blades are slightly concave, or “hollow grind,” which works better to create a straight glide forward.

In speedskating, the narrower, longer blades “give them more bite to the push,” said Dimon. speedskates are also harder than figure or hockey skates, measuring 64 on the Rockwell scale as opposed to the wider blades’ 60.

Since Eric Heiden’s five gold medals in 1980 brought the sport to the attention of many Americans, the blades have literally had a curve thrown in: “In short track speedskating, they were bending the blades. When they moved indoors, speedskating in a hockey ring has many more turns. Bending the rocker helps with cornering on the turns,” Dimon said.

“In the early days, we used to bend them with a hammer and a drawer.”

Dimon remembers skating under coach Pat Maxwell, who introduced him to Mike Miller. Miller took his skates from him, remarked, “Oh, these aren’t even bent,” and proceeded to shut the penalty box door on them a few times to bend them.

Bending the blades shaved off as much as 10 mph around the corners and dropped the record times around the world. Short track speedskates also have the blade not in the center of balance, but offset, to prevent the boot from touching the ice when it’s angled inward.

While many skaters won’t allow anyone else to sharpen their skates, all boots are custom made to fit the skater’s foot. Some skaters order individual changes to their skates.

“Cathy Turner had a 17-and-a-half inch blade,” Dimon said. “She was really amazing. I used to work for the company that built her skates. She had one blade moved forward on the boot.” That way, when her feet crossed over, the blades wouldn’t touch.

“The length of the blade is really a function of inseam length and flexibility,” Dimon said. “It’s about the crossover.”

Another innovation that shaved time from speedskating totals was the “shark suit.” Aerodynamic fabric, first used in swimming, became a necessity for speedskaters after Heiden’s famous yellow suit.

“The first big drop [in times] happened with the Lycra suit. Heiden’s teammates hated it– they called him the ‘yellow banana.'”

In 1996 the “clap skate” was introduced by the Dutch women in speedskating. Instead of the boot being attached to the blade at the ball and the heel, the clap skate has a hinge under the ball of the foot that allows the blade to stay on the ice while the heel lifts off. “That let the technique change a little. It brought in a longer stroke, put the calf muscles in play.”

The clap skate caught on and world records fell rapidly in the 1998 Olympics in Nagano, Japan.

This year factors that affect racers’ speeds may be as large as Pyeongchang’s elevation (700 feet above sea level) or as small as the micrometer of a skate blade.

“You can be watching the Olympics on TV and just throw it out there, you could say to your family, ‘I wonder what kind of bend Joey Mantia’s got?’