Annual building of the Ice Palace 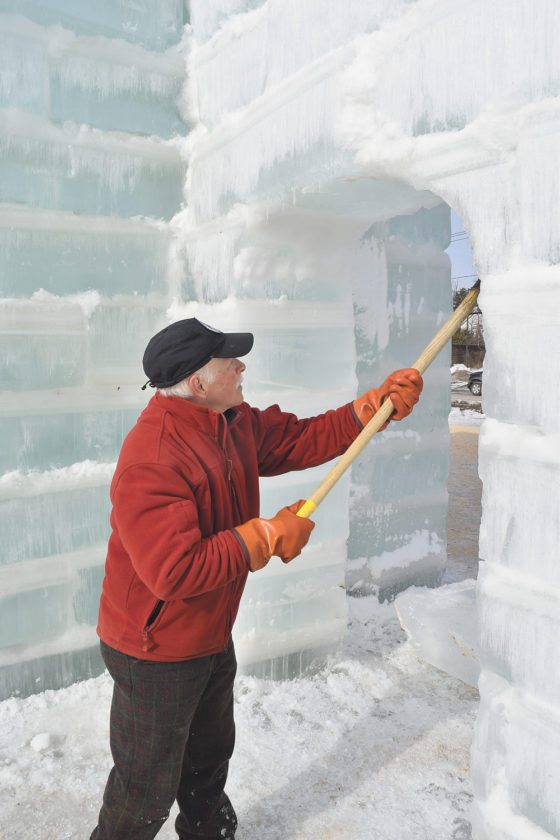 The weather cooperated, the ice froze and many hands came together to build Saranac Lake’s famous Ice Palace in the week before Winter Carnival.

Dean Baker, who’s in charge of the project, said there are between 100 and 110 steady volunteers who help build the palace. Two crews from Moriah Shock Camp also contribute heavy lifting during the weekdays.

The work is divided so well that although it looks like people are swarming all over the Ice Palace, nobody bumps into anybody and nobody loses time wondering what they’re supposed to do.

First, one man runs the circular saw, cutting into the thick lake ice about 6 inches deep. Then two more use a long handsaw to cut the rest of the way through the 15-inch block. 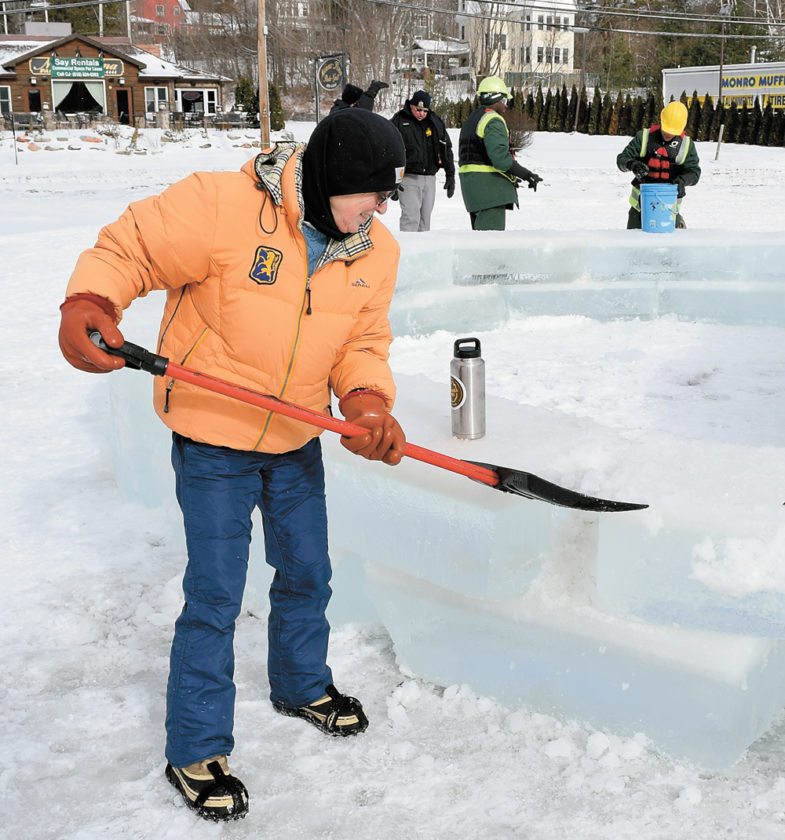 Using a “spud,” a long-handled tool with a claw on one end, workers then push the ice into a channel. A backhoe equipped with a claw lifts the ice blocks out of the water and sets them in the bucket of a tractor, which then drives the ice block near the palace wall. At the wall, in the early stages the workers can push the block into place. However, as the walls get higher the only tool that will do is a crane.

Being ice, the blocks are uneven.

“We set a level on them,” Baker said, “then chip or shave them down.”

Caperton Tissot, who got involved in the building seven years ago, said there’s more to ice than you might think. The author of “Adirondack Ice” started out intending to write a short volume on the Ice Palace, but the more she looked, the more she found. Ice in the Adirondacks used to be a major industry, she said.

The palace at the end of the 19th century was practical as well as decorative. After the Winter Carnival, the ice blocks were saved and sold — ice from Lake Flower might be found in a mint julep at a Saratoga restaurant in July, or cooling fish at the Italian market in New York City.

Harry Duso’s ice saw, built by him in 1939, solved the problem of Ice Palace workers falling into the lake when they were pushing the saw. Duso’s saw cuts as it is pulled away from the edge of the ice. (Enterprise photo — Glynis Hart)

In those days, many cities and towns built ice palaces. As refrigeration replaced ice harvesting and storage, an entire Adirondack industry went bust. However, the ice palaces continued to be built in many places, just for their beauty.

In Saranac Lake, the annual Ice Palace construction is a community tradition that finds fresh enthusiasts every year.

Doc Ward, who cut the two ice bears standing guard outside the palace, was getting help from his son, Liam, this year. Heavy equipment drivers took their kids and grandkids into the cabs with them, and showed them how to do it.

And this year, as every year, kids will scoot through the “mole holes” cut through the walls that their parents can’t fit into. 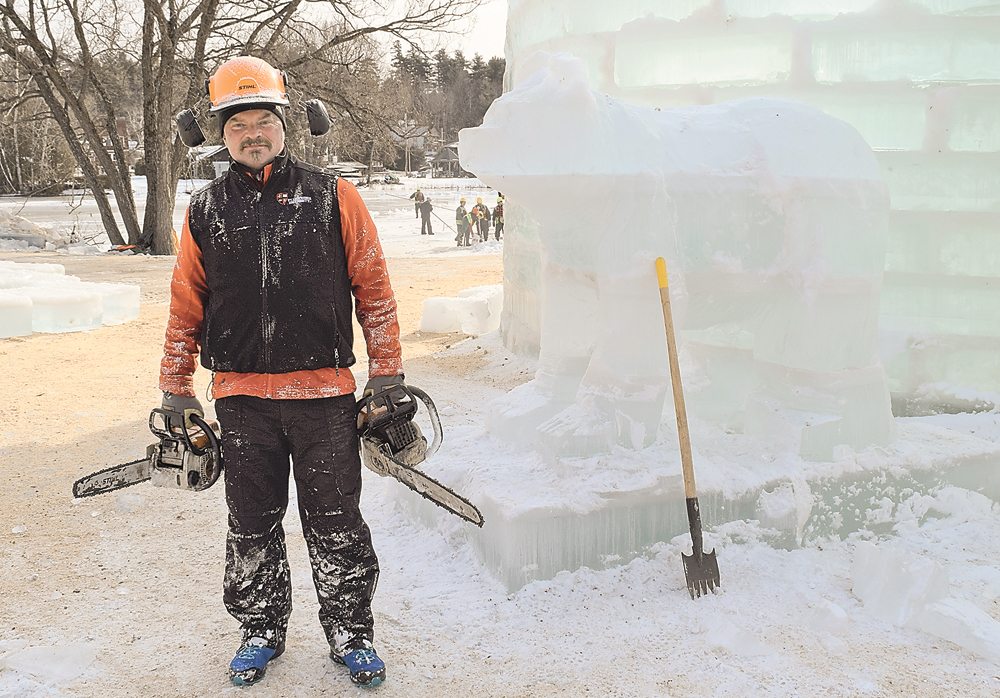 While the town of Eagle River, Wisconsin, still builds an ice castle, it’s not a proper ice palace because you can’t go inside it. Other places, such as the ice village in Quebec City or the ice city in Harbin, China, or the ice palace in St. Paul, Minnesota, are built by commercial enterprises — not by volunteers.

“It’s too bad this is the only one left,” Tissot said. 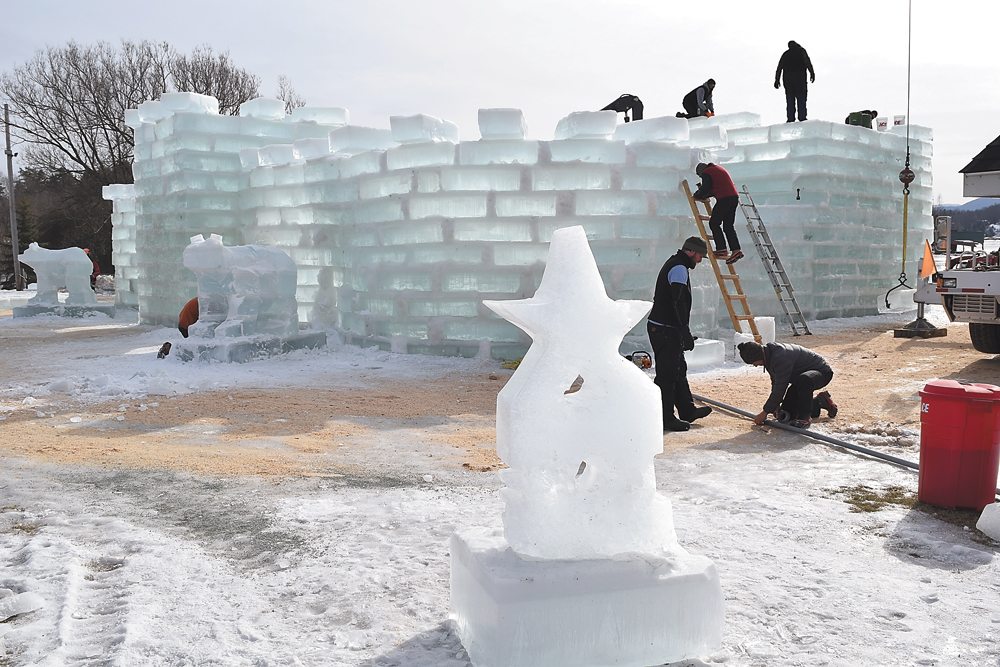 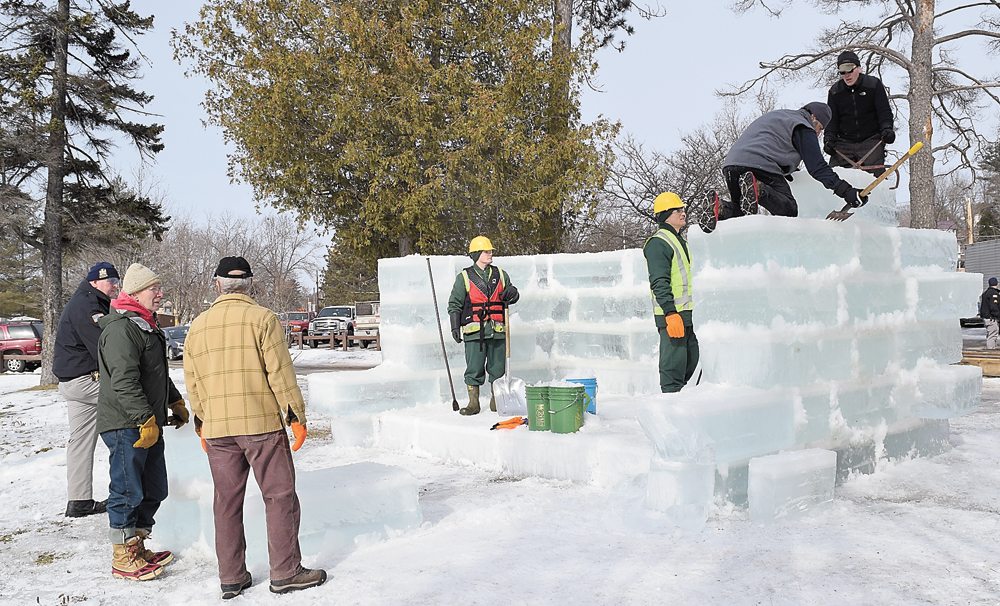 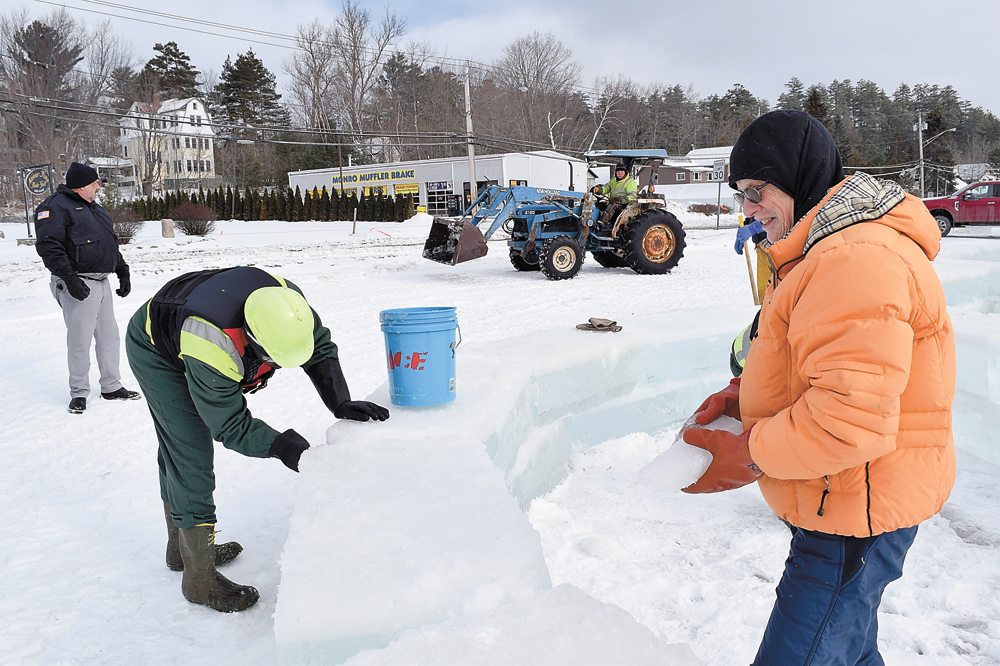