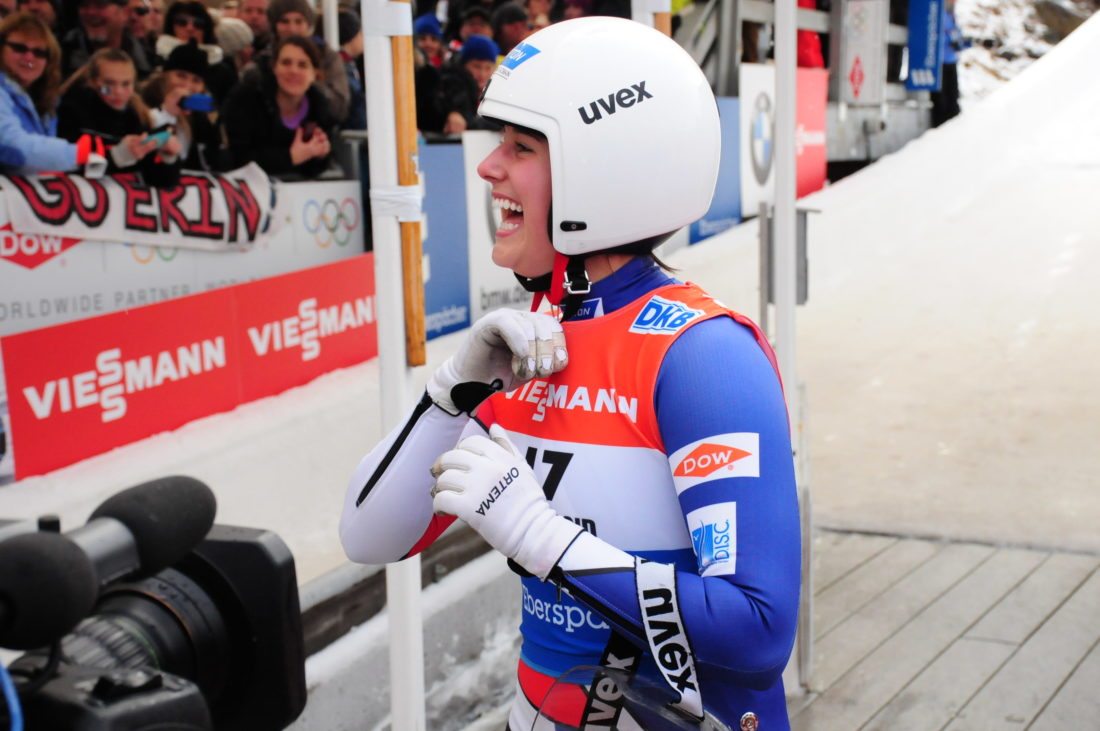 Emily Sweeney, who lives in Lake Placid, is greeted by fans following her run in the 2015 World Cup singles luge event at Mount Van Hoevenberg in Lake Placid. (Enterprise photo)

LAKE PLACID — Luge racer Emily Sweeney will make her first Olympic entrance next month in South Korea, but this is the third Games that have had an impact on her life.

Sweeney hails from Connecticut but lived at the Olympic Training Center in Lake Placid before buying a house in the village. Her father is from Saranac Lake, and she still has family in the area. She is just 24, but she’s knocked on the Olympic door before, and after a much-needed mental and physical reset, the luger is prepared to make her splash on the world’s biggest stage.

When she was 16, Sweeney lost out on a spot on the 2010 U.S. Olympic Team to her sister, and then failed to qualify for the 2014 Sochi Olympics. After Sochi, Sweeney basically walked away from the sport that had driven her life up to that point.

“At that point, I was just along for the ride,” she said of missing the team that went to Vancouver. “I was very young, so I didn’t really address my feelings about it until it was kind of too late, so I think it kind of affected me in 2014. But eight years later, and I have no doubts this year.”

Sweeney is coming off of wrist surgery she had in 2016, but in some ways thinks her injury helped her become a better competitor.

“You always hear about athletes getting injured and it made them better, and I kind of would hear those stories and think, ‘Wow, they’re crazy,’ but I kind of experienced that myself,” she said. “By having surgery right before the [World Cup] season, I showed myself that I had different strengths as a glider, and I learned a lot from that whole experience, and I think I’m better because of it.”

Sweeney said her wrist feels much better but still needs some attention. Sweeney had her best World Cup season this year, but oddly enough, her worst competition was at her home track at Mount Van Hoevenberg in Lake Placid, where she had the slowest first heat run after a mistake in turns seven and eight. She placed 17th overall in the race, but had already secured a spot on the Olympic team by that point.

This season Sweeney earned her first World Cup gold medal, along with three more top-10 finishes. Sweeney said she’s in a good place despite the poor run on her home track.

“That was a fluke and something that I’m not even mad about because it was such a crazy thing that happened,” she said. “I was ready for that race; I was ready to do well in that race. I had so much support there, and I wasn’t nervous. I went into it like any other race.

“But I had such a weird scenario happen in curve 7-8, and it just put me too far back. I couldn’t get out of that hole.”

Sweeney said that her fans — called Team Sween — are the best she could hope for. Her mother, father, sister and aunt and uncle are all expected to travel to Pyeongchang, South Korea, for the Olympics, along with her sister’s fiance.

“I have the best kind of support group you could ask for; they are awesome,” she said. “They’re happy for me and with me no matter how I do. They’re ready to go. They’re always ready to go.”

Another luger on the team, Erin Hamlin, who hails from Remsen down near Utica, will be going to her fourth Olympics this year, but also announced that she will retire after the games. Sweeney, who roomed with Hamlin for years, said she’s sort of putting the retirement out of her mind for now.

“We joke around a lot that this will not be her last year,” Sweeney laughed. “I’m sad I’m going to be losing my roommate of seven or eight years. She’s like family to me, so not being on the road with her is going to be an adjustment.

“But I can tell she’s excited for it, to have a life outside of luge. It feels like it’s time for her to move on the next chapter, so I’m happy for her while being sad for myself.”

Despite this being her first time donning the U.S. Olympic uniform, Sweeney has been around the games before, so she doesn’t necessarily feel like the new kid on the block.

“It’ll be my first time [competing] at the Games, so that will probably be a little bit of a shock,” she said. “But then it’s a race. And I know how to race … so I’m kind of going at it from that respect.”

She declined to put podium expectations on herself and is instead looking to make four clean runs. She said if she can do that, she’ll be satisfied.

“I don’t need anything crazy, like I don’t need the four best runs of my life,” she said. “If I just have four good runs, I’ll be happy with results.”

After not making the Olympic team for the 2014 Sochi Olympics, Sweeney essentially walked away from luge. But as a member of the Army National Guard, she said the military provided her with a much-needed reset.

“I was kind of lost as an athlete, so I just stopped and went into my own little world there for a little bit,” she said. “I wasn’t motivated to start training again, and then I got the call to go to a Warrior Leaders course.

“After I got done with that, I said ‘Alright, now it’s time to hit the reset button.’ I wasn’t going to get out of my own way, so I needed someone to kind of make me get back into things. They put me into a school kind of environment, and I’m naturally competitive – I want to do well — and it kind of put me back into that mindset.”

Sweeney also has strong feelings on the recent Russia ban for doping. The International Olympic Committee officially banned the country from competing, but Russian athletes will still be allowed to compete, albeit under neutral colors and Russia won’t be included in the medal tally. But Sweeney thinks the evidence of a long-standing Russian doping program is being dealt with too nonchalantly.

“I’ve been following the story as much as any other athlete, [and] I think they’re getting off easy,” she said. “When it first came out, it said that Russia wasn’t going to have a team. And now it’s that they can compete under the Olympic flag, and now they might be able to walk in the closing ceremonies as Team Russia. I think that’s a joke.

“It was from the higher-ups, and it was deep in their program, and I think that their program needs to be held accountable for it. And it doesn’t seem that, right now, the people that are in power are doing that.”

Russian luge athletes who competed in Sochi were found to have taken part in doping, but Sweeney said she thinks other lugers are generally clean when it comes to performance enhancing drugs.

“With the exception of Russia, I would say they [luge athletes] have better statistics than other sports out there, but I don’t think it’s a luge thing. It’s a Russia thing with doping. It’s not our sport; it’s Russia. Russia was the problem here, so I think that they need to be punished.

Despite the hurdles she’s had to jump to get to the Olympics, Sweeney said she’s excited, even if it doesn’t feel like the full force of her Olympic spot has hit her yet.

“It still doesn’t really feel real,” she said. “I still have the job that I need to do, so that’s kind of overshadowing the excitement right now, but I think maybe that will change once I get to Korea.

“I’m just excited to see what I can do.”