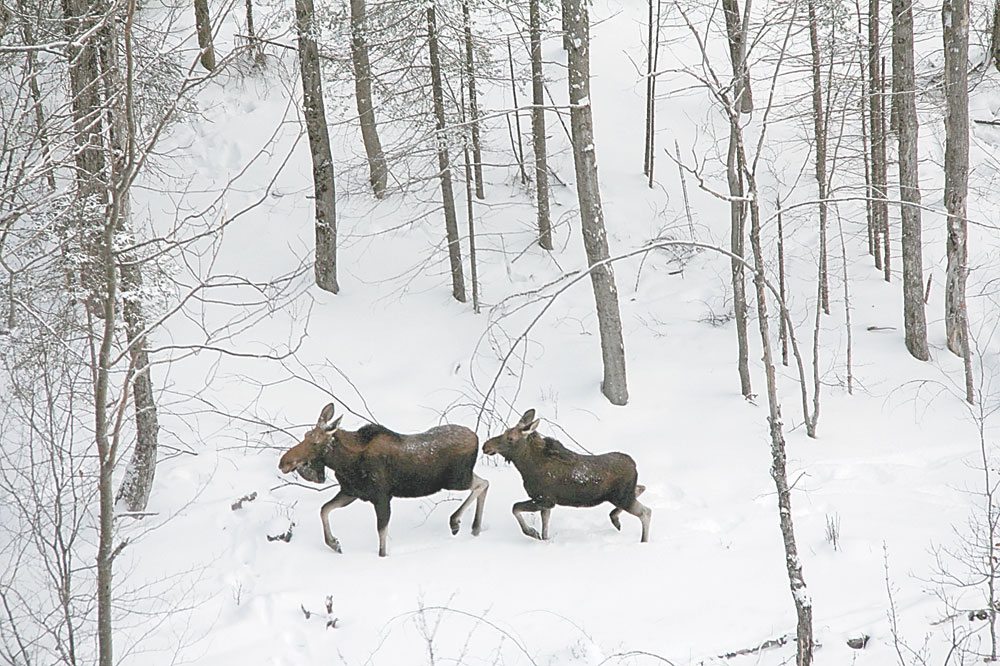 A pair of moose are seen from the air during the state Department of Environmental Conservation’s most recent tracking and collaring operation. (Photo from DEC Facebook page)

RAY BROOK — For the fourth year in a row, contractors and partners of the state Department of Environmental Conservation were out looking for and collaring moose in the Adirondacks.

During the tracking process, biologists from a number of public and private institutions look for moose from the air and either trap or tranquilize the large animals. Over the four years of the survey, the DEC has confirmed 72 moose groups with 113 individuals, but estimates the Adirondack moose population at about 400 individuals. This is down considerably from previous estimates of 600 to 1,000.

The DEC partners with SUNY College of Environmental Science and Forestry, the Wildlife Conservation Society and Cornell University on the project.

In the past, the DEC has used a private company based in Nevada to conduct the air operations. From a helicopter, researchers and scientists look for moose and, once spotted and captured, the moose are fitted with ear tags and in some cases a collar with a GPS unit. This allows the state to follow moose populations and track moose mortality and offspring success.

The DEC told the Enterprise last year the GPS data was not available to the public.

The collars transmit at regular intervals, which allows DEC staff to investigate any deaths, like the department did in January of this year.

According to a press release from the DEC, a moose that was fitted with a GPS collar in 2016 was investigated after its collar sent out a “mortality event” notice.

“The female moose … died on Jan. 5, according to the radio collar,” the DEC said in a release last month. DEC staff, including an environmental conservation officer, snowshoed to the location transmitted and found the moose.

“The temperatures over the previous weekend had been extremely cold, nearly 30 degrees below zero at times,” the release said. “No scavengers had disturbed the carcass. Her coat was thick and healthy looking, and there were no signs of external parasites on the moose.

“However, her bone marrow indicated possible malnourishment. The recovered bone marrow, along with the moose’s head, lungs, kidneys, heart, and liver were packed out of the woods and sent to DEC’s Wildlife Pathology Unit in Delmar for analysis.”

The department has said in the past that the Old Forge area and the northern Adirondacks have the highest concentrations of moose. In prior years, collaring efforts have been successful in the Debar Mountain Wild Forest and near Lake Lila in the Tupper Lake area.

The DEC is also looking for public assistance when it comes to moose sightings. The DEC and its moose partners have an online form to log moose sightings. For more information on moose in New York, including the sighting form, go to www.dec.ny.gov/animals/6964.html.