What’s in the bid for the World University Games?

Lake Placid area (along with Potsdam, Canton and Plattsburgh) is only bidder for 2023 winter sports event

The cover of the Global Sports Committee’s bid to the International University Sports Federation to host the 2023 World Winter University Games in Lake Placid. The bid can be read on lakeplacid2023.com. (Enterprise photo — Griffin Kelly) 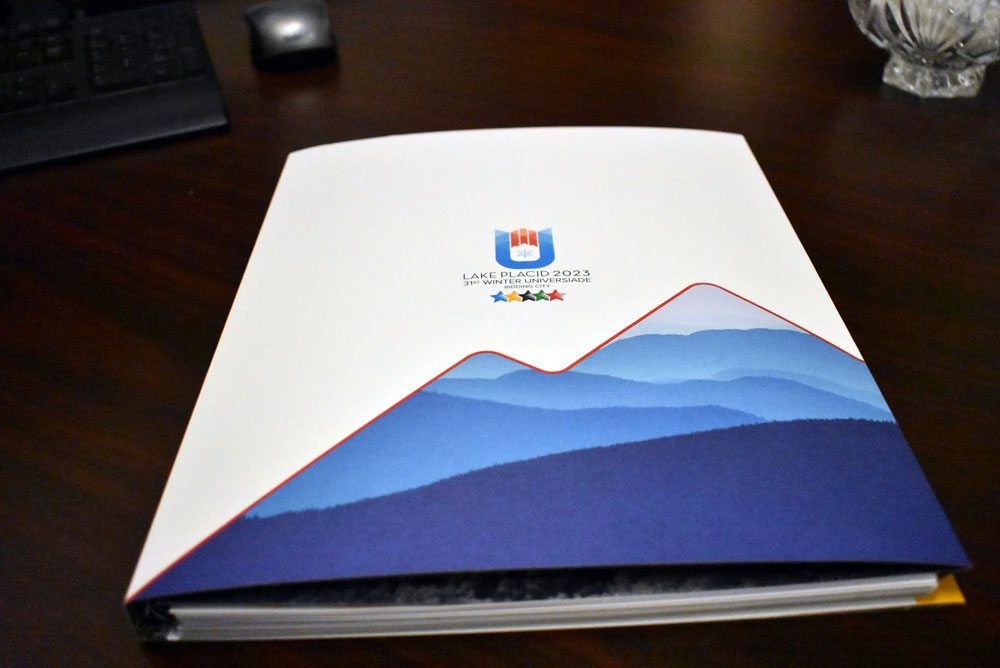 The cover of the Global Sports Committee’s bid to the International University Sports Federation to host the 2023 World Winter University Games in Lake Placid. The bid can be read on lakeplacid2023.com. (Enterprise photo — Griffin Kelly)

LAKE PLACID — The energy in the Conference Center Wednesday night was much calmer than last time.

For the second time, the Adirondack North Country Global Sports Committee held a public forum regarding its bid to the International University Sports Federation (FISU) for hosting the 2023 Winter World University Games here. The games would attract as many as 2,668 participants from 52 countries. The bid deadline has now passed, and there are no other bidders.

In November, the room was full of skepticism with many people asking how much the event will cost and whether the games are necessary for Lake Placid. One resident, Charles Walsh, called the whole thing “bogus” and walked out before the end of the meeting.

Jim McKenna, a committee member and president-CEO of the Regional Office of Sustainable Tourism in Lake Placid, said there was better understanding from the crowd this time around.

“At first glance people say, ‘Well, it’s just like another Ironman,’ but no, it’s not,” McKenna said, referring to the annual Lake Placid triathlon that draws roughly 2,500 participants. “It’s something that is planned and has the ability to affect some of the ongoing issues of the region. The reason to do it is not the economic impact of the 11 days. The reason to do the event is to get all the sports and community and regional infrastructure upgraded.” 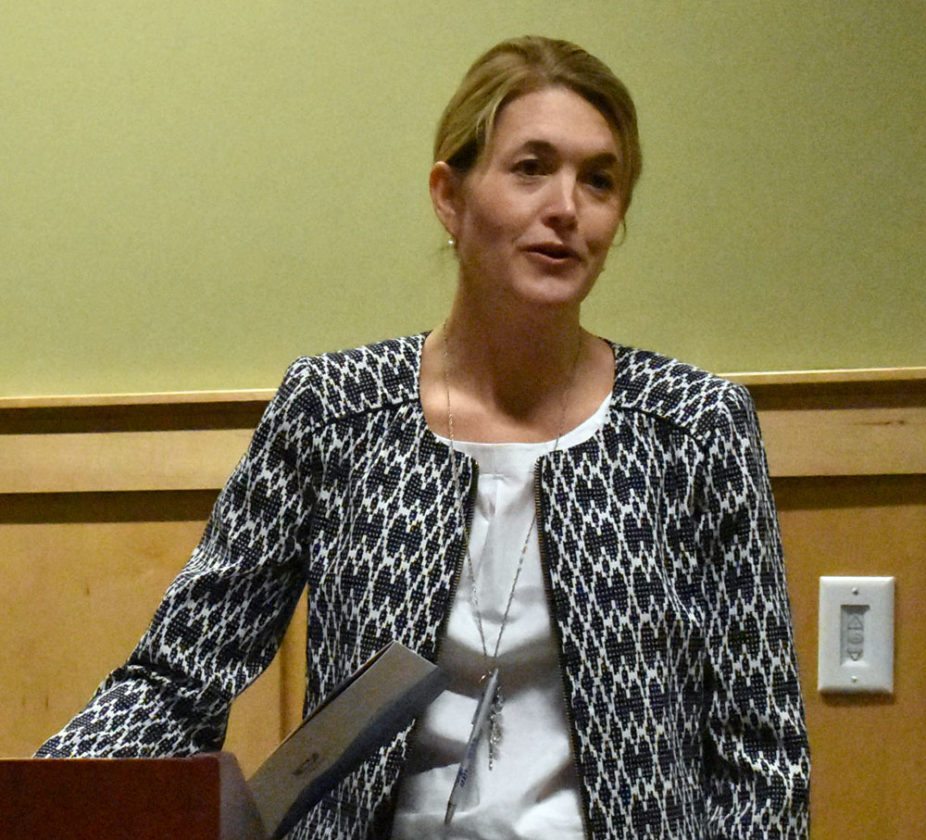 That was the theme of the night — infrastructure. Athlete housing would later become affordable housing. FISU delegates walking down shop-lined roads would require updated streetscapes. Transportation for athletes would mean an upgraded bus system.

FISU delegates will be in Lake Placid from Jan. 29 to Feb. 3, reviewing the area for the games. On March 2, the Global Sports Committee will make its final presentation to FISU in Lausanne, Switzerland. The organization’s winter games have occurred every other year since 1960, and Lake Placid hosted them in 1972, the only time they were in the U.S.

The bid dossier the committee submitted to FISU in December can be found on lakeplacid2023.com under the “Reports and Documents” section. It says Lake Placid on the cover, but it’s more or less the entire North Country.

The bid is more than 130 pages with five distinct sections: “Structure,” an overview of Lake Placid, the Adirondack region and the United States; “Sports and Venues,” a summary of the proposed events as well as the facilities in the area; “Services,” an outline of concepts for housing, transportation and other services for athletes and those involved with the WU Games; “Spirit,” a marketing strategy; and “Support,” a collection of letters of support from various agencies and municipalities.

Before the content is an introduction featuring a letter of support from Gov. Andrew Cuomo and an excerpt from his 2018 State of the State address. He writes in his letter, “The region has the ability to deliver a memorable and rewarding event and we are committed to providing the required expertise and support. Rest assured that if we are selected, many of our agencies will become directly involved, from I Love NY and the New York State Police to the State University of New York (SUNY), the largest comprehensive system for higher education in the United States.”

McKenna said without that letter, the committee wouldn’t have moved forward with the bid.

The bid proposes two time slots in 2023 for the games — Jan. 19 to 29 and March 2 to 12 — both of which tend to have low temperatures and significant snowfall.

State Olympic Regional Development Authority CEO Mike Pratt said the committee chose dates that wouldn’t interfere with other large events such as President’s Day weekend, which is usually one of the busiest days for Whiteface Mountain Ski Center in nearby Wilmington.

Despite Mount Van Hoevenberg already having a track that regularly hosts World Cup-level bobsled, luge and skeleton races, sliding sports were listed as optional, while curling, a sport which doesn’t have an established venue here, was one of the main events. Art Lussi, a member of the committee and operator of the Crowne Plaza hotel in Lake Placid, said the reason why they proposed curling over sliding sports is because the former has more collegiate involvement.

“In America, there’s no college luge, bobsled, skeleton,” Lussi said, “and it’s the same for most countries across the world. There really isn’t any intercollegiate sliding sport program. You have youth programs going on in these countries, but once you’re done with high school, you’re basically an international slider.”

The bid proposes building a curling facility in Saranac Lake that would fit four to five curling sheets, 1,500 to 2,000 seats and two locker rooms. The venue would be across the street from the proposed Lake Flower Resort, which has been in its planing phases for over five years. The facility would have on-site parking and overflow parking at North Country Community College.

The bid says the property owner has pledged the land to the venue, but didn’t name the owner, nor did it give its exact location.

In a phone interview, Saranac Lake village Mayor Clyde Rabideau said the property is just one potential site for the curling facility. He’s aware of another but said he was not a liberty to disclose that information.

In Cuomo’s state budget he proposed a $62.5 million investment into the ORDA facilities, $50 million of which would go toward a “strategic upgrade and modernization plan to support improvements to the Olympic facilities and ski resorts.”

This would make much less of a financial hassle for building the new venue and updating current ORDA facilities if the state legislature approves Coumo’s proposal; however, McKenna said if it doesn’t go through, the Global Sports Committee would still commit to hosting the 2023 games.

“We have five years,” McKenna said. “I think there would be an ongoing effort. We hope when the budget’s in place, [the $62.5 million] is there, and if it’s not, then we’ll come up with another round. We’ll move it forward. If selected, that will certainly mean a lot in moving those programs forward.”

The bid proposes utilizing college venues in the area such as the Cheel Arena at Clarkson University in Potsdam, the Ronald B. Stafford Ice Arena at SUNY Plattsburgh and the Appleton Arena at St. Lawrence University in Canton for events such as hockey and ice skating. All these universities wrote letters of support.

Some venues will need upgrades and expansions. The bid proposes a renovation of the Olympic Jumping Complex: installing an elevator and second-floor deck in the base lodge, repairing and upgrading the snow-grooming fleets and replacing the aerial’s pool trampoline. At the U.S. Olympic Training Center, 100 new rooms are proposed.

This part of the bid proposed two concepts for housing all the athletes, FISU delegates and media representatives: the “Legacy” concept and the “Hotel” concept.

The “Legacy” concept would require converting existing properties into an athletes’ village. Curlers and alpine skiers would have accommodations closer to their venues. The Crowne Plaza would serve as the FISU headquarters for the duration of the games.

Though also questioned at the public meeting in November, McKenna still couldn’t provide a definite location for the athletes’ village. He said there are a few parcels of land still in the planning stage.

Lake Placid Mayor Craig Randall said his village and the town of North Elba are currently working toward setting up vacation rental restrictions, and there would be more information in the spring.

The “Hotel” concept would have athletes staying at various hotels throughout Lake Placid, Plattsburgh, Potsdam, Canton, Malone and Lake George. There are 7,476 hotel and motel rooms in the area, which would be more than enough, according to McKenna.

“In both scenarios, proposed new housing and rooms will be located in Lake Placid and constructed in the form of apartments, townhomes and condos, with the same quality and standard that existing rooms provide,” according to the dossier.

Wilmington town Supervisor Randy Preston said someone bought the Whiteface Chalet motel and is interested in using it for athlete housing during the games. He also mentioned a hotel developer who reached out to him Wednesday afternoon about setting up athlete housing. Preston said they’re still in preliminary talks, but this mystery buyer can “make things happen.”

This section also takes transportation into account. Plattsburgh International Airport has agreed to be the point of entry for the games. The bus station will be moved from the south end of Plattsburgh to the airport by 2021.

This chapter guarantees proper merchandise, ticket sales and broadcasting and also pretty much summarizes the entire bid under the heading “Development.” FISU asks why Lake Placid wants to host the games, and again infrastructure is one of the main reasons.

“The bid process has prompted an increased sense of urgency and commitment to infrastructure development projects, including an existing effort to increase broadband [internet] access to the communities in the region,” the bid says. “Additionally, the Games will provide a timeline to address transportation circulation, pedestrian amenities, parking, and curb appeal in the greater Lake Placid Area.”

“You don’t want to be in a position where you’re hosting the world and you have an embarrassing situation.”

There are more than 40 letters of support in the bid, including from state police, the Lake Placid Business Association, the U.S. Olympic Committee, the villages of Lake Placid and Saranac Lake, SUNY Plattsburgh, Paul Smith’s College and state Sen. Betty Little.