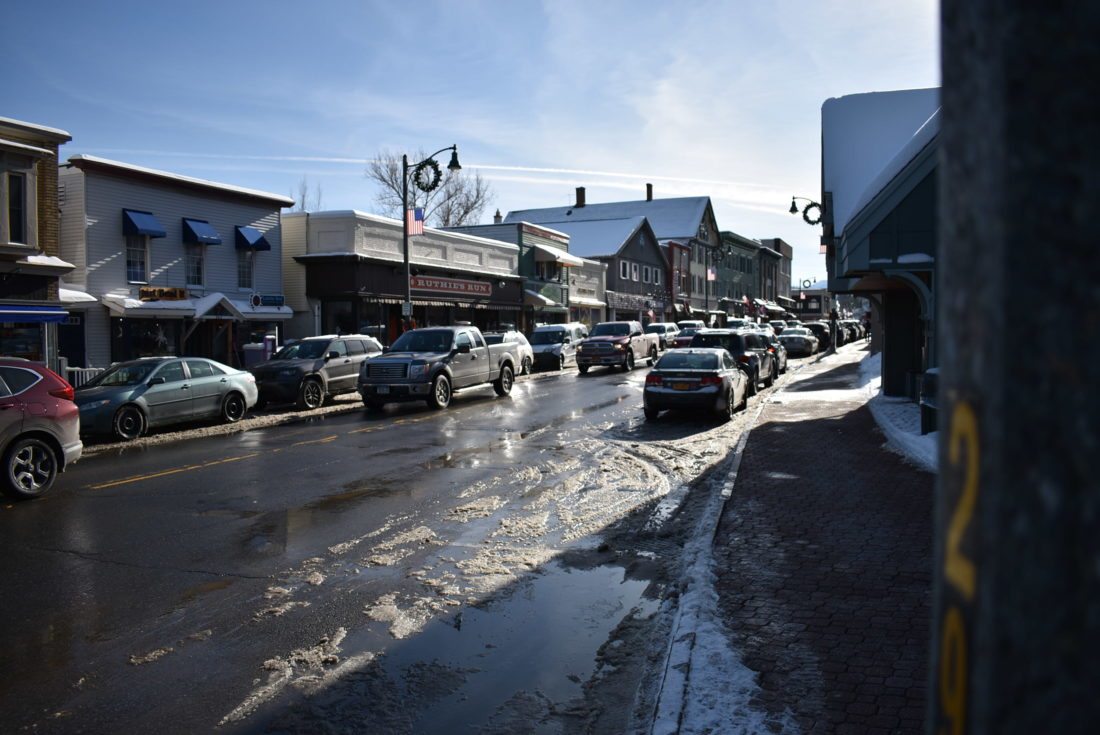 Main Street in Lake Placid will undergo some sewer line upgrades this spring, including replacing an outdated pipe near Saranac Avenue, eliminating a lift station and strengthening sewer lines underneath many businesses. (Enterprise photo — Griffin Kelly)

LAKE PLACID — The village plans to replace and renovate wastewater lines along Main Street this spring.

Despite some inconveniences toward the top of Main Street for a few weeks this spring, Mayor Craig Randall said all this work is needed to appease state orders, protect Mirror Lake and accommodate the rush of summer tourists.

“This is nothing this time around,” village Trustee Peter Holderied said in regard to the work this spring. “It will be much more severe the second time around.”

The village board might also soon approve the reconfiguration of the streetscape and the storm drains leading into Mirror Lake as part of a green initiative for spring 2019. The storm drain system would implement bioretension basins at the foot of Saranac Avenue that filter water through the soil rather than pumping it into Mirror Lake, and the sidewalks would have trees added to them.

Peter Holderied said the possible projects in 2019 would amount to a “100 percent total rebuild” of Main Street from the High Peaks Resort to Mid’s Park and possibly all the way to the Golden Arrow hotel, which he owns.

Holderied said businesses along Main Street would most likely lose income for that period of time but will eventually be happier with the finished product.

“It’s not going to be fun whatsoever,” he said, “but you can’t live for the minute. You’ve got to sell the vision.”

With infrastructure almost 110 years old, upgrading is necessary, according to Randall.

“We’re no different from any other municipality in New York,” Randall said in regard to fixing and replacing outdated pipes.

This spring’s project is expected to cost $1,552,000, which was acquired mainly through grants and a loan with a zero-percent-interest rate from the New York State Environmental Facilities Corporation.

There are two aspects to this project.

First, the village will replace a wastewater line that runs under the Mirror Lake Inn and the Lake House hotel and down Main Street to Mid’s Park.

The state Department of Environmental Conservation ordered Lake Placid to replace the waste water line in 2004.

The new line will also lie higher in the ground and eliminate the need for a lift station that’s currently underneath the Lake House hotel property. A lift station is pretty much a pump that forces water upward, so gravity can drive flow from there.

Randall said the lift station requires a lot of maintenance, especially during blackouts.

“Every time there’s a power outage,” he said, “we have to connect the lift station to a portable generator, and if the power goes out in the Mirror Lake Inn, a lot of people are not going to be happy.”

With the higher pipe, wastewater will flow naturally to an existing line that runs along the west side of Main Street.

The construction and digging is projected to begin in the third week of March and finish by Memorial Day. Randall said there might not be any parking from Saranac Avenue to Mid’s Park during the work. That’s roughly 50 unavailable parking spots for two months.

Some business owners along that stretch of Main Street are not looking forward to this construction.

“I don’t see the frost being gone by [the third week of March],” he said. “When I heard about the digging, I figured it’s probably good for the town, but it’s going to hurt small business owners like me.”

Borden said he saw a lot more foot traffic near the Lobster Reef last April, and the construction could hurt that this year.

The Lobster Reef is located right near the intersection of Main Street and Saranac Lake. Purple Saige is further down Main Street next to Emma’s Lake Placid Creamery, an area not along the construction plan’s route.

“Fortunately I own Purple Saige now,” Borden said. “That could possibly subsidize the loses.”

Other business owners along that portion of Main Street, such as Cathy Johnston of Ruthie’s Run clothing shop, Michelle Hogan of Element Day Spa and Salon and Tim Lennon of Darrah Cooper Jewelers, all agree that the replacement pipe is important, but they hope the work gets done in the projected time frame for the sake of parking.

“It’s critical they get it done before Memorial Day weekend.” Johnston said. “Those are the softer months anyway. We’re going to hope it’s an early spring with nice weather.”

Lennon said it won’t be good for business but probably not detrimental, either.

“It won’t be as devastating as if it were in the summer or December, which is our busiest month,” he said.

Hogan addressed the point that it costs a lot of money to rent a storefront on Main Street.

“We pay so much to be in this location,” she said.

“Of course we want things functioning correctly,” Hogan added, “but we’ve seen storefronts come and go on this street.”

Lori Fitzgerald, the director of sales and marketing at the High Peaks Resort and a representative of the Lake Placid Business Association, said the work is necessary, so there’s not much the village can do about it.

“The alternative is a sewer pipe breaks, and that would be disruptive,” she said.

Fitzgerald agreed with Holderied’s sentiment that this spring’s construction won’t come close to the impact of the proposed 2019 projects.

“That project, should it go forward, would be highly disruptive,” she said.

“I think the end product will be a very attractive look, but there will be an impact on businesses.”

Fitzgerald said there’s no general consensus among members of the LPBA on how they feel about the proposed projects, but they continue to look forward and wait for updates from the village.

Part two of the project is to upgrade the sewer line that runs from Mid’s Park down Main Street and then along the Mirror Lake waterfront. Lateral lines from many businesses connect to this bigger waste pipe. These lines are hard to get to physically because they’re underneath buildings that have been in Lake Placid for nearly a century.

“They’re pretty much impossible to be replaced,” Randall said.

There hasn’t been any disastrous problems with these lateral pipes, but some have leaked into Mirror Lake. Raw sewage containing E.coli backed up into an abandoned pipe and then leaked into the lake this past October. The village board posted “swim at your own risk” fliers around the lake as an immediate response. The pipe was plugged the next day and the OK was given for swimming.

Pipes that are too hard to dig up will be slip-lined instead. Randall described slip-lining as putting a sock in the pipe; it fills the line with a material that coats and strengthens the infrastructure.

“In effect it gives you a brand-new pipe,” Randall said.

The slip-lining won’t require tearing up the road or be as intrusive as the replacing of the water line up the road.

Lake Placid is built on tourism and sports, and attracts thousands of guests at a time. It’s wastewater treatment plant processes about a million gallons of sewage a day right now and that number only goes up during the peak summer tourism season. The updated sewer pipes will maintain a more efficient flow to the treatment plant as more and more guests arrive.