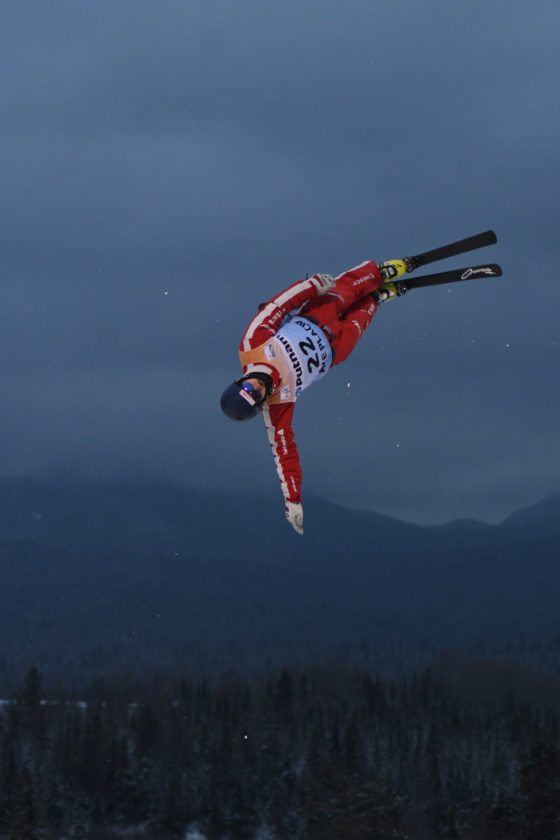 A Swiss aerials competitor twists in the early evening light during training Tuesday for this weekend’s freestyle World Cup competition in Lake Placid. The Olympic Ski Jump Complex, where the aerials event takes place on Friday and Saturday, is one of the venues operated by the Olympic Regional Development Authority. It could see upgrades as part of the New York state budget plan Gov. Andrew Cuomo unveiled Tuesday. (Enterprise photo — Lou Reuter)

Details are scarce at this point, but state Sen. Betty Little said it’s her understanding that those tens of millions would largely go to upgrade 1980 Winter Olympic venues as Lake Placid gears up to host some major international winter sports events in the next few years. The International Children’s Games are locked in for 2019, and local officials are confident about securing the much bigger Winter Universiade (also known as the World University Games) in 2023. Local officials have said they may also bid to host the Special Olympics World Winter Games in 2021.

The Cuomo administration has made Adirondack tourism a major priority, and ORDA is a big part of that. Last year the governor put $20 million in the state budget so ORDA could upgrade the base lodges at its Whiteface and Gore ski centers in Wilmington and North Creek, respectively, as well as build thrill rides such as a zipline and “mountain coaster.” In March 2016, as a particularly warm winter wracked the ski industry, the governor’s office redirected $5 million from the debt-ridden Metropolitan Transportation Authority to stabilize ORDA. Even in a good ski year, ORDA’s revenue falls short of expenses, and the state normally covers its operational losses, plus capital funds for expansion and upgrades — but usually nowhere near $62.5 million.

It’s not yet clear which venues would be upgraded first, or if those plans have even been made. In a press release on the budget proposal, the governor’s office said the new capital funding would include $50 million “for a strategic upgrade and modernization plan to support improvements to the Olympic facilities and ski resorts, $10 million for critical maintenance and energy efficiency upgrades, and $2.5 million appropriated from the Office of Parks, Recreation and Historic Preservation budget as part of the New York Works initiative.”

ORDA spokesman Jon Lundin said he could not provide details. Lake Placid village Mayor Craig Randall said the same. Wilmington town Supervisor Randy Preston said he hasn’t read the full budget, but he believes Cuomo has a soft spot for the Adirondacks. James McKenna, president and CEO of the Regional Office of Sustainable Tourism, also didn’t know specifics but said he thinks not all of the money would stay in the Lake Placid area; some would go to Gore and ORDA’s Belleayre ski area in the Catskills.

North Elba town Supervisor Roby Politi didn’t know specifics, either, but he said it would make sense for the governor to fund Olympic venue upgrades because he wrote a support letter in the local bid packet for the Universiade.

Little, Randall, McKenna and Politi were among the local officials who traveled to last year’s Winter Universiade in Almaty, Kazakhstan, on a mission to learn about the games.

Little, a Queensbury Republican, said Lake Placid’s biathlon range “needs to be moved and improved,” and Olympic Center ice rinks need upgrades. She said she helped secure $3 million in state funding last year to upgrade the ski jumping complex, but it still needs refrigerated ramps and a new intermediate-height jump. She also said a curling rink proposed for Saranac Lake and workforce housing may be needed.

“We can show the Universiade committee that we have the funds to do what we need,” she said.

While the Universiade would be based in Lake Placid, Little said it would use rinks as far away as Plattsburgh, Potsdam and Canton.

Little described the Winter Universiade as an event “one down from the Olympics” in terms of scale. Its winter games have occurred ever other year since 1960, and Lake Placid hosted them in 1972, the only time they were in the U.S. They include alpine skiing, nordic skiing, biathlon, snowboarding, curling, ice hockey, figure skating, synchronized skating, short-track speedskating and up to three other sports selected by the host country. As many as 2,668 participants from 52 countries have competed in recent years, including national-team-caliber athletes.

“Once we do these, I think we’re in the running for a lot of things,” Little said, suggesting the Youth Olympics as a possible future goal.

She said the proposed ORDA funding is a big deal that “really would keep Lake Placid in the forefront of being the winter sports capital of the country. And it also will keep the Olympic Training Center here.”

Critics might question pouring so much state aid into Lake Placid, which is already more prosperous than its North Country neighbors, but Little said Lake Placid’s success prompts development in its neighboring communities and provides jobs for people who don’t live there. She said Lake Placid visitors also travel around the region. Plus, she said, Lake Placid’s ongoing Olympic legacy leads to all kinds of international mentions. She recalled watching a figure skating competition in Utah in which the announcer mentioned a skater’s best performance had been in Lake Placid. The Winter Universiade, she added, should get major television airtime in Europe.

“It’s great publicity and it’s great advertising for our area,” she said. “Even in these next Olympics in South Korea, I bet you’ll hear Lake Placid mentioned over and over.”

The alternative, she said, is to let the Olympic venues become unusable artifacts, as she saw last year when she drove through Squaw Valley, California. Even the sign announcing the home of the 1960 Winter Olympics was tired and old, she said.

“They’ve done nothing to keep themselves alive as an Olympic center, and Lake Placid has,” she said, recalling the $20 million-plus the state spent to open a new bobsled-luge-skeleton track in 2000. “So it does take a lot of money.”

Protect the Adirondacks said it is pleased the governor wants to keep the Environmental Protection Fund at a record $300 million and maintain funding for the Adirondack Park Agency and Department of Environmental Conservation. Cuomo would also give $40 million to the DEC “to improve access to state lands, rehabilitate campgrounds and upgrade its recreational facilities, all as part of the Adventure NY program.”

McKenna praised a Cuomo proposal for a $13 million capital fund to spur construction of private lodging facilities in the Adirondacks and Thousand Islands regions.

The governor’s budget would also commit $5 million to an ongoing partnership between Trudeau Institute, a biomedical research facility in Saranac Lake, and Clarkson University of Potsdam. This will be the fifth year the two institutions are joined after the governor announced the five-year, $35 million state funding commitment in late 2013, intended to save Trudeau.

“It’s been tough, no two ways about it,” said Little, “but you don’t want to see it close. But it certainly has to show some growth, which it is doing.”

Cuomo would require all SUNY and CUNY campuses to have food pantries on campus, or else help students “receive food through a separate arrangement that is stigma-free.” He also proposes studying the possibility of legalizing marijuana and a special health tax on vapor-smoking products.

The governor’s budget would extend an eighth year of REDC grants, some of which have come to the Tri-Lakes area, plus a third year of $10 million Downtown Revitalization grants.

Overall, Little said, “There’s so many unknowns.” She said she is worried for second-home owners now that Congress has reduced the amount of state and local taxes one can deduct from federal taxes. She thinks New York needs to lower taxes and praised the governor’s emphasis on local governments sharing services. As for school aid, she said last year’s increase was probably sufficient for now.

“I don’t think you need to grow every year,” she said.

“Although I am happy to see continued investment around the state, we must be cognitive that we are facing a possible $4.4 billion deficit,” he said. “Our state has continuously ranked among the worst states in the country when it comes to property taxes; this needs to change.”