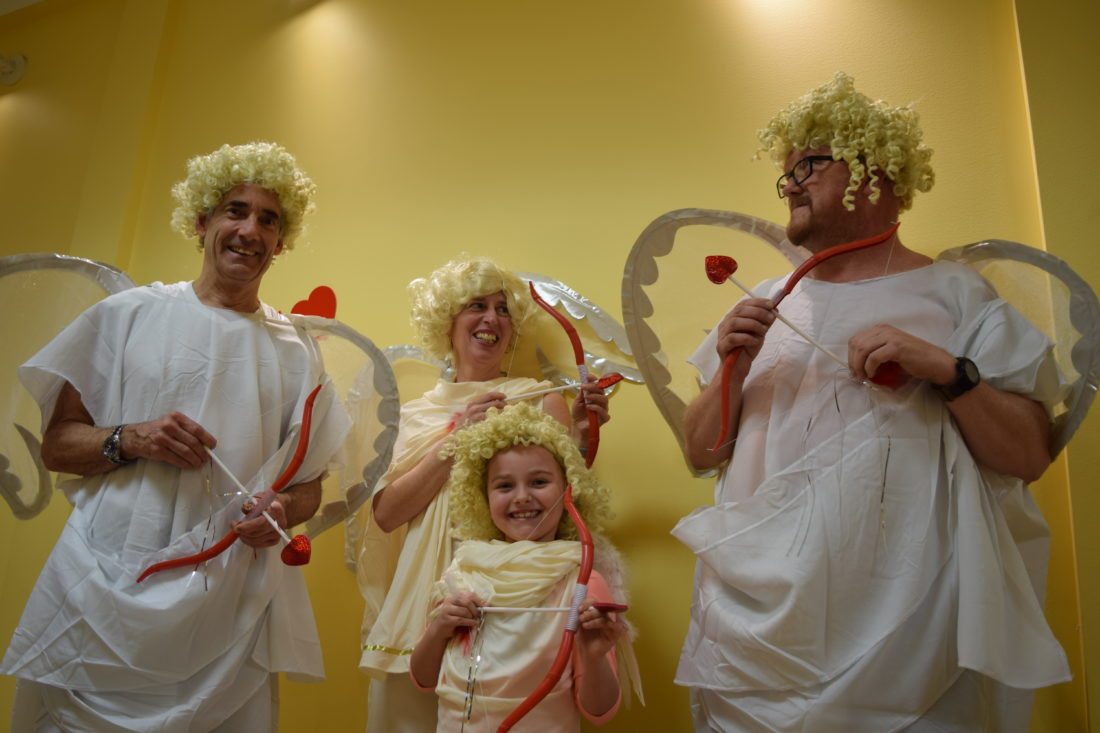 SARANAC LAKE — The world’s largest gathering of people dressed as Cupid may take place on the final Saturday of Winter Carnival. Guinness Book of World Records personnel will be on hand to verify the fact, if indeed Saranac Lake beats the world record.

It may depend on you.

How many people are willing and able to don a costume of toga, wings, bow and arrow, and blond curly wig on Feb. 10? How serious are Saranac Lakers about being silly?

The record attempt will take place Saturday afternoon after the Winter Carnival parade (which starts at 1 p.m.) at St. Bernard’s School, where all participants must remain in costume for a full 10 minutes. (Correction: An earlier version of this article inaccurately said the gathering would take place at 10 a.m.)

Dan Reilly of the local Kiwanis Club, which is organizing the record attempt, said the Kiwanis club’s parade float will feature a 14-foot Cupid made by Rumble Carpentry.

“This year’s theme, ‘Festival’ was problematic for costumes,” Reilly said. “Last year it was easy. It was ‘Wilderness,’ and everyone dressed up as wild animals. What’s your costume for ‘Festival?’ We fell back on St. Valentine’s Day, because it’s nearest on the calendar. So we’ll have the giant Cupid on the float.

“Then we thought, ‘Wouldn’t it be funny if we had a bunch of people dressed up as Cupid?'” said Reilly. “Then we wondered if anyone else had ever done it, so we looked it up.”

As it turns out, the largest gathering of Cupids has been done, at a festival in Madrid, Spain, in 2009. But the record seems beatable.

“The record was 199,” said Reilly. In that attempt, recorded by the Guinness Book of World Records, two organizers were disqualified for not being in full costume, so they didn’t meet their goal of 201.

Once Reilly got the ball rolling with Kiwanis, he contacted Guinness and notified them of the record attempt. Then, he got the rules. There are a lot of them. For one thing, Guinness wants to count the participants accurately, so there has to be an enclosed space, and there have to be certified counters, and there have to be timekeepers to mark the start and finish of the event.

“We don’t have to meet all the criteria because I’m pretty sure we’re under 5,000 people,” Reilly chuckled.

At first they planned to have the gathering in Riverside Park. However, there was a glitch.

“I thought of this after the fact,” he said. “Growing up in Saranac Lake, whenever you put a costume on, you have winter clothes on. It was Halloween or Carnival!”

Reilly called Guinness to see if people could wear their costumes with winter clothes. There was suspense.

“Guinness are not speedy responders,” he said. Finally, their special committee got back to him with a decision: They couldn’t allow heavy winter clothes because it would detract from the costume.

Luckily, Kiwanis was able to relocate the event to the gym at St. Bernard’s, so everyone will be able to stay warm. There will be changing areas inside the school. Kiwanis is providing free refreshments and a collectible wristband, as well as prizes for oldest and youngest Cupids, largest civic group, largest school group, tallest Cupid, shortest Cupid and more.

The costume must include: a curly blond wig, wings, white toga, and a bow and arrow.

What if you have naturally curly blond hair?

“My advice is to make it look like a wig,” said Reilly. “Guinness is very strict.”

The bow and arrow?

“I don’t want any crossbows, anybody shooting each other,” said Reilly. “I bought several Halloween-type bows and arrows for like $1.57 for three. They’re easy to find and cheap.”

Does he have any concern with the stereotype of toga-wearing?

“Oh, you mean like frat parties? We have some concern, but we’re a pretty law-and-order group, and the chief of police, Chief Potthast, knows what we’re doing. He’ll be, like, 40 yards away.

“He was relieved that we were able to move it inside, though,” said Reilly. “I think mostly because of the parking.”