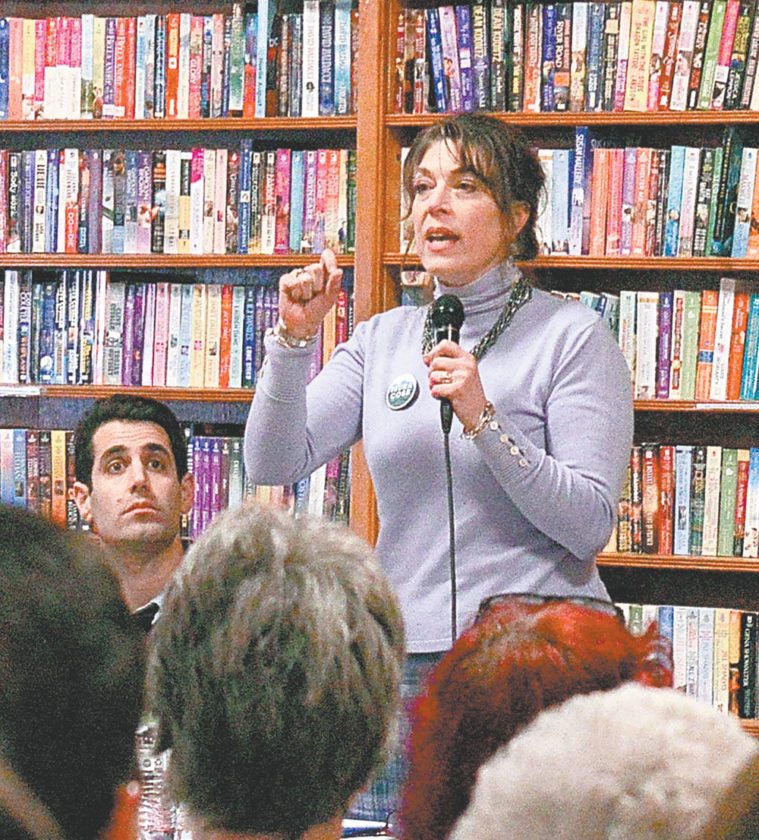 Tedra Cobb, one of eight Democratic Congressional candidates, speaks at the Citizens Acting Together for District 21 on Jan. 7. Cobb said, if elected, she would set up committees and coalitions to remain connected with constituents as she addresses the many political issues facing Congress. (Enterprise photo — Aaron Cerbone)

(Editor’s note: The Enterprise has run profiles of other 21st Congressional candidates and will continue the profiles until the election, including an interview with current Congresswoman Elise Stefanik.)

Democratic Congressional candidate Tedra Cobb has held many jobs in her public service career and said she wants others to have the same opportunity to work wherever they want to and move from job to job, just as she has.

Growing up in Fairport with one biological brother and nine adopted siblings, Cobb said she was born into human services and never left. Starting her career as a Spanish-speaking correction counselor at Riverview Correctional Facility, she translated for the facility’s medical staff, specifically in HIV and AIDS testing. That opened the door to do HIV and AIDS education for a nonprofit through the ’90s in St. Lawrence, Lewis and Jefferson counties.

Cobb said the termination of the Presidential Advisory Council on HIV and AIDS in December was concerning. Having worked with individuals affected by the disease in the days when the president would not mention its name nor take action when hospitals refused service, she said she does not want treatment to regress.

When the Gay Men’s Health Crisis assembled in force outside the office of Gov. Mario Cuomo to bring his attention to HIV and AIDS, Cobb said she saw the power groups of people hold to change their lives and government.

“Those coalitions of people fought to be paid attention to; without that we would not be where we are now,” Cobb said.

After sitting on several other boards, she ran for St. Lawrence County legislator in 2001 to represent health care, aging and human services on the board. She won and started a Government Review Committee — a coalition of business leaders, legislators and constituents who looked at what worked on the county level, what needed to be done and where money could be saved.

The committee established an ethics board in the county and passed an ethics law, filling a hole that had been left when the 1991 temporary commission on ethics ran out. A self-declared firm believer in term limits, Cobb left her position at the county after two terms.

Cobb sets up systems. She said it is the best way she knows to hear many opinions, make informed decisions and support as many people as possible with her actions.

“We’re kicking [health care] down the road. Or, what I see happening now is we’re dismantling it piece by piece because the [American Health Care Act] didn’t pass,” Cobb said. “I see health care, the whole system, as something that needs to be looked at, and analyzed, and fixed. Not piecemeal.”

She also said she would want to hear from groups involved in health care to learn about what each part of the system needs, from hospitals, to patients and even employees. Seeing health care as a major economic driver in the Tri-Lakes area with Adirondack Medical Center in Saranac Lake and surrounding towns, she said it also impacts other industries bringing people and money into the area.

“How will we have tourism if the hospital’s not open?” Cobb said. “Who’s going to climb? Who’s going to send their child to college?”

Her husband, who owns a solar energy business, has spent thousands of dollars on premiums and deductibles for employees, money she said should be used toward the business instead of paying for employees’ health care. If a small business owner didn’t have to spend a large portion of business investment on health care, she theorized, it could hire more staff.

Cobb recalls a particularly cold winter when fuel prices were nearing their peak during the recession when county residents may have been running out of fuel to heat their homes. She developed a coalition of fuel providers, the Department of Social Services and the Office for the Aging to create a safety net for those at risk of running out of fuel or wood.

Cobb said one of the hardest decisions she had to make was the result of having a committee of people she talked with, listened to and was held accountable by. In her second term as county legislator the St. Lawrence jail was under construction and she agreed to support a project labor agreement, a collective bargaining agreement with a labor organization that establishes the terms and conditions of employment, before contractors were hired.

In a room of 150 people, she was told by frustrated local contractors that approving the agreement would make the project more expensive while representatives from a union argued it would be cheaper and asked her to uphold the commitment she had made.

“It wasn’t until we were in the process of building the jail and understanding the project labor agreement that I fully understood what I committed to,” Cobb said. “As I was educated I stuck with that commitment because I believed in that commitment. I didn’t change my mind, but I really had to think about what I had committed to.”

Cobb said it was difficult to take action despite dozens of people telling her not to, even though she thought it was the correct decision and had already committed to it. She said she appreciated the feedback from the local contractors, and the ability to hear more information, even if it was critical and contrary to her decision.

“I am elected by the people to represent people, to work for people, in this district, in Washington,” Cobb said. “I have committed to them that I will listen to them, and I will work for them, and I will report to them.”

Cobb believes that schools are the hub of a community and that local, state and federal government should invest more in education. She said there should be more investment in the early years of education and supports universal pre-K and full-time kindergarten.

“We know when children start early and are able to continue, that helps, especially children who are growing up in poverty,” Cobb said.

Cobb also said more money should be spent on computers, broadband internet and take-home technology for students to modernize their education.

Cobb believes in public investment in general, saying that funding things like Medicare or Social Security should not be seen as paying for an entitlement, but making an investment in one’s future and society.

She remembers while working for a nonprofit, she wasn’t able to nurse her daughter well and needed formula — an expensive need. For six months, she accepted money from the Special Supplemental Nutrition Program for Women, Infants, and Children, and recalls being embarrassed by employees at cash registers for accepting the help, a stigma she wants to eliminate.

“I remember using WIC coupons and being humiliated when I handed in a coupon by the cashier. I remember thinking ‘I’m working, I’m working!'” Cobb said. “The vast majority of people who receive food stamps are working. Do you know how many veterans receive food stamps? Every civil society makes investments by contributing to the common good.”

Cobb said she would not be running if she had not been a county legislator and that her experience in government has taught her how to work with people of all political persuasions.