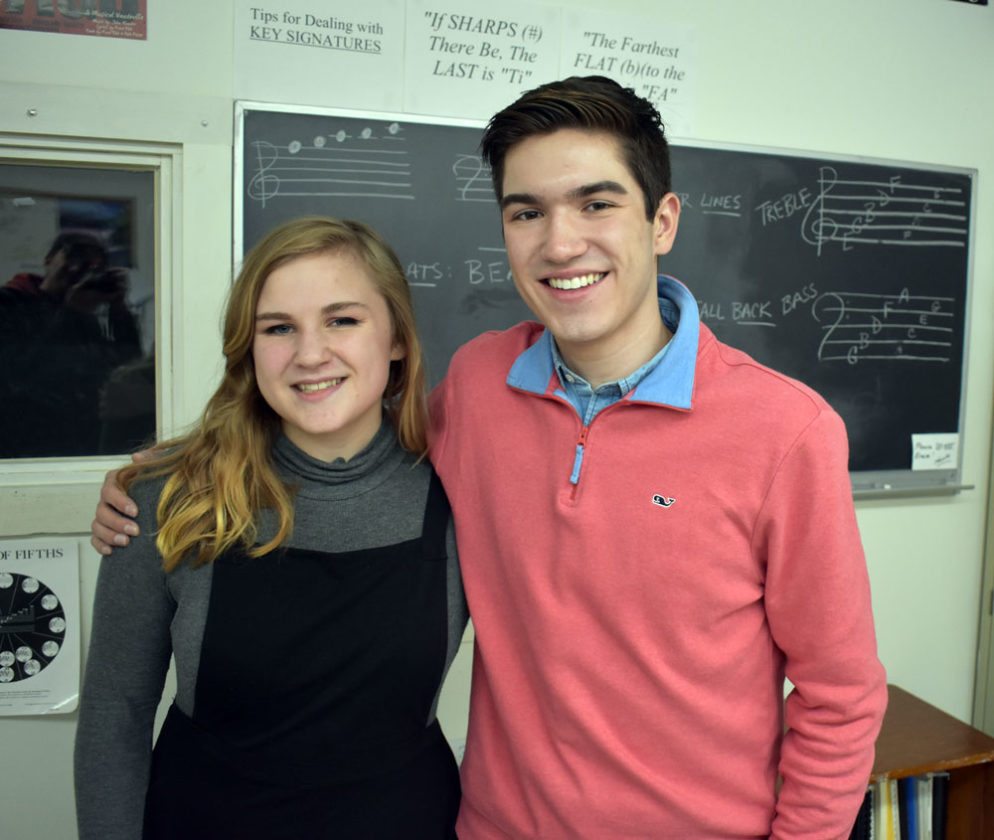 Mary Keating, left, and Louis Catania of Saranac Lake High School will perform in the New York State School Music Association Conference All-State this weekend in Rochester, which is the highest level of musical achievement within the state of New York. (Enterprise photo — Griffin Kelly)

The chorus at the conference is much larger than anything the pair had performed in before, but that’s the exciting part, they said.

“It’s good to be working with other students who are also passionate,” Keating said.

SLHS Vocal music teacher Drew Benware said Saranac Lake has sent many students to All-State in the past, but it is still a massive achievement for Catania and Keating.

“Saranac Lake has a rich history of sending students to NYSSMA,” Benware said, “but that doesn’t mean it’s not rare.”

Even if a student receives a 100 percent grading during his or her audition, her or she is not guaranteed acceptance to the conference.

“It’s not uncommon to have up to 75 students receive a 100 percent grading,” Benware said. “It’s nice to see all [Cantania and Keating’s] efforts rewarded in this way.”

Both Catania and Keating have been involved with the school’s music program for years. Catania sings baritone in chorus, plays French horn in the band and plays trumpet in the jazz band. Keating sings alto in the chorus and plays alto saxophone in the jazz band.

Catania participated in every musical program the school has to offer, and Benware has been there to help him along the way.

“Mr. Benware has taught me a lot of my skills,” Catania said.

Keating’s brother, Matthew, participated in the conference two years ago.

“It’s pretty incredible to being going,” Keating said. “I was so awe struck.”

Catania would like to study medicine after high school but stay involved in music in some capacity.

Keating said jazz band director Keith Kogut has taught her much, and she would like to pursue a career in music after high school. She currently has her eyes set on the Crane School of Music in Potsdam or SUNY Fredonia, where she would study instrumental music with hopes of one day becoming a band director.