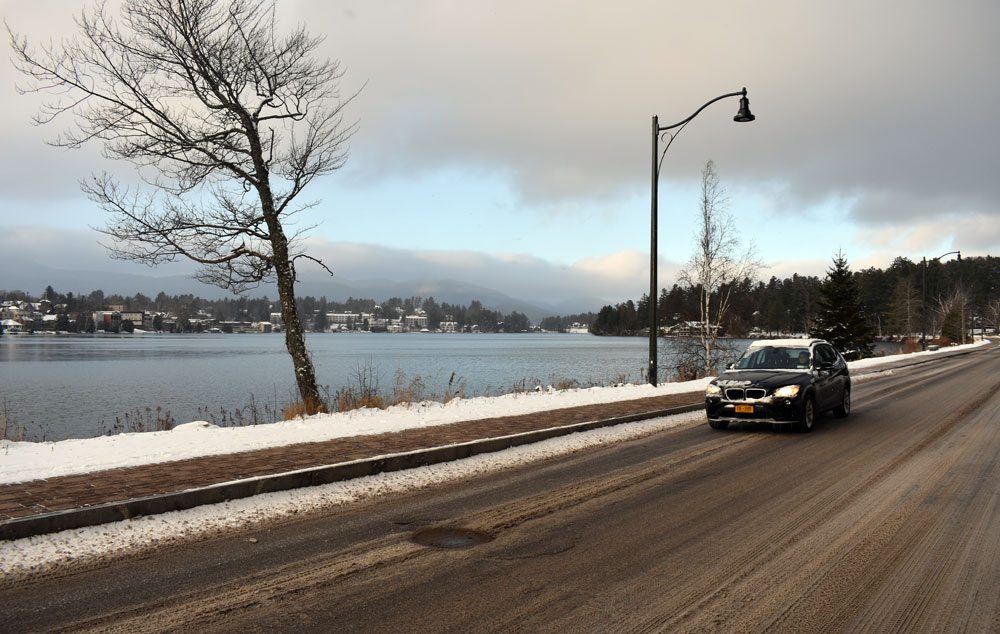 LAKE PLACID — Ever since scientists discovered the level of road salt in Mirror Lake is 160 times higher than the median concentration for Adirondack lakes not impacted by salt, the question became, “What can be done about this?”

North Elba town Supervisor Roby Politi said the town is in preliminary stages of setting up salt-free zones by the north end of the lake with caution signs, so drivers are aware of potentially slick roads. Politi said there is no official date as to when the zones will be created, but they will be implemented this winter season “whenever we get the signs.”

Politi said he would also like to encourage businesses owners to use less salt on their sidewalks and parking lots. Some local businesses have already taken this into account in recent years, such as the bar and restaurant Smoke Signals, which has heated sidewalks that don’t need to be salted outside its establishment.

In a letter to the editors of the Adirondack Daily Enterprise and Lake Placid News, Mirror Lake Inn owner Ed Weibrecht suggested all lakefront property owners keep their sidewalks free of ice and snow without salt. He said his business already does this.

“If everybody did the same, we would be able to maintain the health and integrity of our lake,” he wrote, “which so greatly supports our economic viability.”

Politi said the chairman of the Essex County Board of Supervisors, Randy Preston of Wilmington, has been working with the state Department of Transportation and the Department of Environmental Conservation to reduce the amount of salt dropped by the state, but “unfortunately, that hasn’t happened to the extent that it should be.”

The DOT is responsible for plowing and salting Main Street. In Essex County, the state DOT uses salt treated with liquid magnesium chloride.

In an email, DOT Public Information Officer Bryan Viggiani wrote, “We use GPS to monitor snow and ice operations in real time so that our response is appropriate. At certain times, we can apply salt brine in advance of a storm to prevent snow from bonding to the pavement. We use alternative anti-icing materials where appropriate, and we store and handle salt to keep it from entering the environment.”

When asked if the DOT is working in conjunction with the village, town or county to reduce salt usage, Viggiani wrote, “Yes. It is incumbent upon everyone to utilize best management practices to minimize salt use. NYSDOT continually refines its winter maintenance practices to provide for safe travel with minimal environmental impacts, and we encourage others to do so.”

North Elba Superintendent of Highways Larry Straight said his department is working to reduce its use of a sand-salt mixture on the three-fourths of a mile of road at the east end of Mirror Lake. Currently, the town uses a mixture of 93 percent sand and 7 percent salt on roads next to Mirror Lake, such as at the intersection of Mirror Lake Drive and Northwood School Road.

While North Elba is responsible for stretches of road by the north and east ends of the lake, the village of Lake Placid handles the south end and all the sidewalks. Mayor Craig Randall said the village is still in the midst of finding a solution to the problem.

He said he recently brought back a sample of ice remover from Innsbruck, Austria, called “aggregate,” which he thinks could be a viable alternative to salt.

“[Innsbruck’s] climate is a little warmer [than Lake Placid’s],” Randall said, “but it cut right through it.”

Last year, the village tried using a salt and corn-starch-based liquid de-icer called Street Treat on Mirror Lake Drive’s sidewalks after seeing its effectiveness in Saratoga Springs. However, it was not the answer. Rain diluted the chemical, and the lack of sunlight prevented a speedy melt, so the village went back to using salt.

Plus, salt is more cost-effective for the town, with it being priced at $80 a ton.

In regard to the sidewalks around Mirror Lake, Randall said they can’t completely remove salt from the equation at this point.

One study isn’t finished yet, but Wiltse said evidence strongly suggests road salt is contaminating groundwater, soil and possibly well water. He said this could be a health problem, especially for people with diabetes or who are at risk of heart disease.

Lake Placid runs on municipal water, so it isn’t directly concerned with road salt health issues, but surrounding communities could be at risk.

Politi said if the studies find road salt is contaminating drinking, that would definitely increase the concern over fixing the issue.

“If that’s the case,” Politi said, “I think that will have a big effect.”

Brendan Wiltse, scientist and stewardship director of the AuSable River Association, said there is currently no evidence to see how Mirror Lake will change if road salting decreases or stays the same, but that’s something on which his group is working.

“We hope to be able to answer that question in a few years,” Wiltse said. “There’s just not enough information to project and understand what’s going on in the future.”