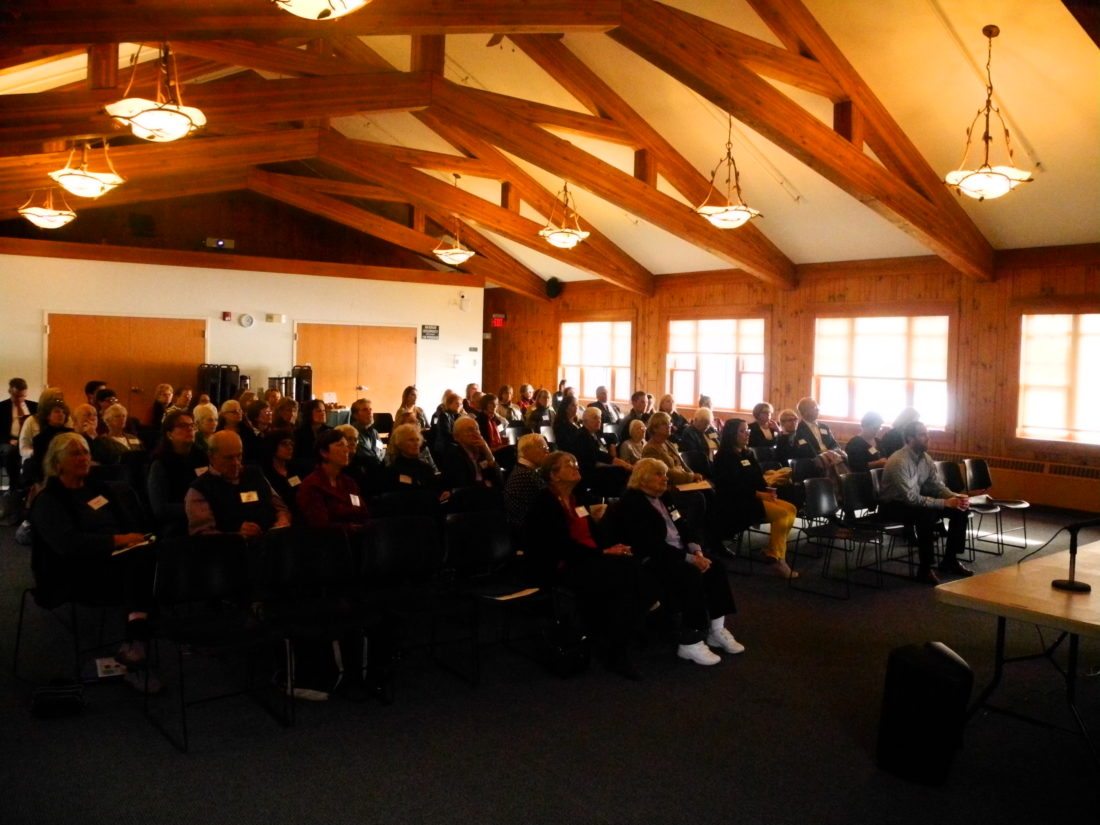 The audience listens as Greg Olson, the director of the state Office of Aging, presents his talk on how communities can accommodate the elderly in Paul Smith’s College’s Stirling Tomkins Pine Room. He said with the economic and social benefits elderly populations bring, Adirondack communities should be striving to attract and retain older residents. (Enterprise photo — Aaron Cerbone)

PAUL SMITHS — Mercy Care for the Adirondacks hosted an educational forum at Paul Smith’s College Thursday on the economic benefits of establishing an aging-friendly community.

The forum featured several aging experts who discussed the value elderly populations provide to their communities and how to accommodate them.

Dr. John Feather, CEO of Grantmakers in Aging, presented data showing how older segments of the population contribute more to their surrounding community while using less resources than millennial generations, a fact which he said contradicts popular belief.

As New York’s population is projected to rise slightly in the next few years, the number of 20- and 30-year-olds leaving the state is surpassed by the number of 50- and 60-year-olds finding homes here. This is as true in the North Country as anywhere else in the state.

“Part of the forum is to show that the aging population, which is about one third of the populations in the Adirondack Park, are actually an economic driver,” Mercy Care board president Jerry Hayes said.

There is a stigma that the elderly are a drain on society which the forum’s organizers want to dispel, instead promoting the hard work people put into their communities even past retirement and encouraging an elderly population, whose struggles with isolation have been highlighted by recent studies, to be as involved as possible.

“We’re so associated with the jobs that we have, so when you retire, most of your friends are usually work friends and you got up every morning to do something,” said Greg Olson, the director of the state Office of Aging. “When you don’t have that anymore it changes everything. People are looking to still be valued and wanted and have something to look forward to. The connection to the schools, I think, is natural.”

The forum promoted volunteering for social, economic and altruistic benefits. Olson focused on schools, believing the interaction of generations and life wisdom older tutors and teachers aids can provide are beneficial in more ways than one.

Olson said there are things a community can do to attract and accommodate elderly populations including: providing outdoor spaces for socialization, transportation, housing, social participation and health services.

Aging individuals are at risk for depression and isolation and often need people, tasks and events to make sure they stay involved in a social group, whether for recreation, work, volunteering or just for companionship.

The forum also featured a panel consisting of Jim McKenna, the CEO of the Regional Office of Sustainable Tourism, president of the North Country Chamber of Commerce Garry Douglas, chairman of the Hamilton County Board of Supervisors Bill Farber and the supervisor for the town of Horicon Matt Simpson.