Getting Tupper Lake on track … or trail 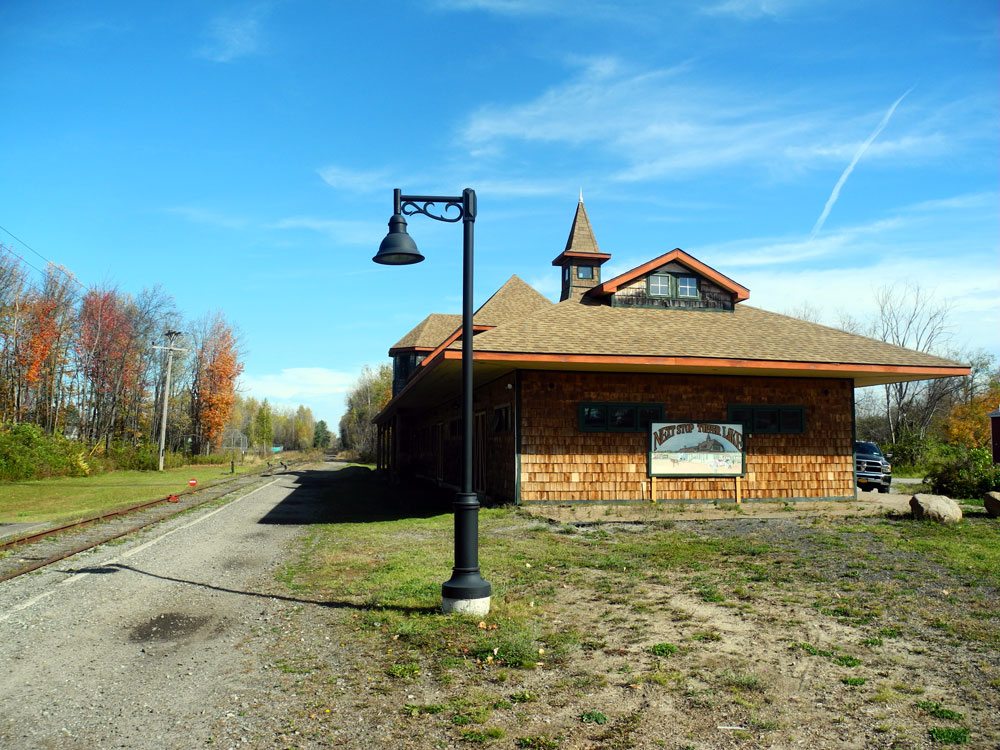 The depot at “Next Stop Tupper Lake” is the proposed switching point where rail-trail riders would get off a train and on the trail. (Enterprise photo — Aaron Cerbone)

TUPPER LAKE — While towns, villages and residents of the Tri-Lakes area weigh in on a judge’s recent ruling on the proposed rail-trail debate in hopes Gov. Andrew Cuomo will give the project a thumbs-up or down, residents in the “Crossroads of the Adirondacks” look for a speedy decision to help their economy gain steam.

The 2016 amendment to the unit management plan to recommission train tracks ending in the downtown junction and rip up tracks leading to Lake Placid for a multi-use trail was shot down by Supreme Court Judge Robert Main Jr. in September.

“Forty-seven years of nothing is what I’m looking at,” Adirondack Recreational Trail Advocates board member Chris Keniston said from his Washington Street driveway, which has a view of the rail. “The only people who are using it right now are four-wheelers.”

Several minutes later, an all-terrain vehicle, riding down the corridor illegally, rolled by his house as the sun set.

The travel corridor has been vacant for many years, and with that much time comes a host of opinions, proposals and beliefs on what should be done with unused railways.

The current plan, which was blocked by Judge Main, was to have functioning railways from Old Forge to Tupper Lake, where its last stop would mark the start of a 34-mile trail through Saranac Lake to Lake Placid, and could be hiked, biked or snowmobiled.

Keniston said he has ridden hundreds of miles of rail trails around the country and has seen firsthand the value the trails have to local communities.

“I see it as such a wasted resource,” Keniston said. “I think every day there is not [a trail] it is costing the Tri-Lakes a lot of money.”

Many rail supporters feel the same way; however, they also want to keep the resource of a train as a form of mass transportation into the Adirondacks and a way to attract tourism. Their rail-and-trail plan would run the trail alongside the railway, deviating to connect with other trails and roads when the corridor becomes too narrow or marshy.

“There are rails and trails all over the continent. I don’t know why a trail and a rail can’t exist in a 100-foot-wide corridor,” Next Stop Tupper Lake developer Dan McClelland said. “I’m a supporter of having a four-season trail come to Tupper Lake, but I don’t think it has to come at the expense of the railroad.”

Though this option would provide multiple modes of transportation between Tupper Lake and Lake Placid, those backing the trail-only system say it would not support most casual forms of travel, leaving the flat rail path to wind through hills and run along busy roads.

Despite the work it would take to develop a trail following the railway across the Tri-Lakes, advocates for keeping the rails in place believe both pathways can be accommodated simultaneously.

“I think if we can put men on the moon, we can do a rail and trail,” Mayor Paul Maroun said at an Oct. 18 village board meeting, at which he voted against a resolution supporting the 2016 unit management plan. The resolution passed.

The town of Tupper Lake’s board has also passed a resolution supporting the rail-trail, asking the governor to overturn Judge Main’s decision an designate the railway as a recreation corridor. So did the Lake Placid village board and the North Elba town board.

Hope Frenette, an ARTA board member who lives in Tupper Lake, said the trail-only system would provide the Tri-Lakes with more than just tourism and that an easy, accessible trail would bring people who want to just stop in town as well as those who would stay and live there.

“Without having this, we’re losing out on people that might want to move here,” Frenette said. “Tourism is important, but it is also important to have amenities here for your residents.”

Without taking a step forward, every solution or plan is only speculation, and all the while, Tupper Lake is not receiving the benefits of rail or trail.

Whether Tupper Lakers put their faith in the rail, the trail or a combination of the two, every side of the debate expressed one, unified answer: Tupper Lake needs something to get its economy back on track.

“When every other outdoor community across the country is building these multi-use recreational trails and we’re not, we’re gonna lose out — regardless of how nice an area, how great an area it is.” Frenette said.

“I’d like to see this program move forward,” McClelland said. “We’ve talked too long about it, and I think it needs to be settled post haste.”