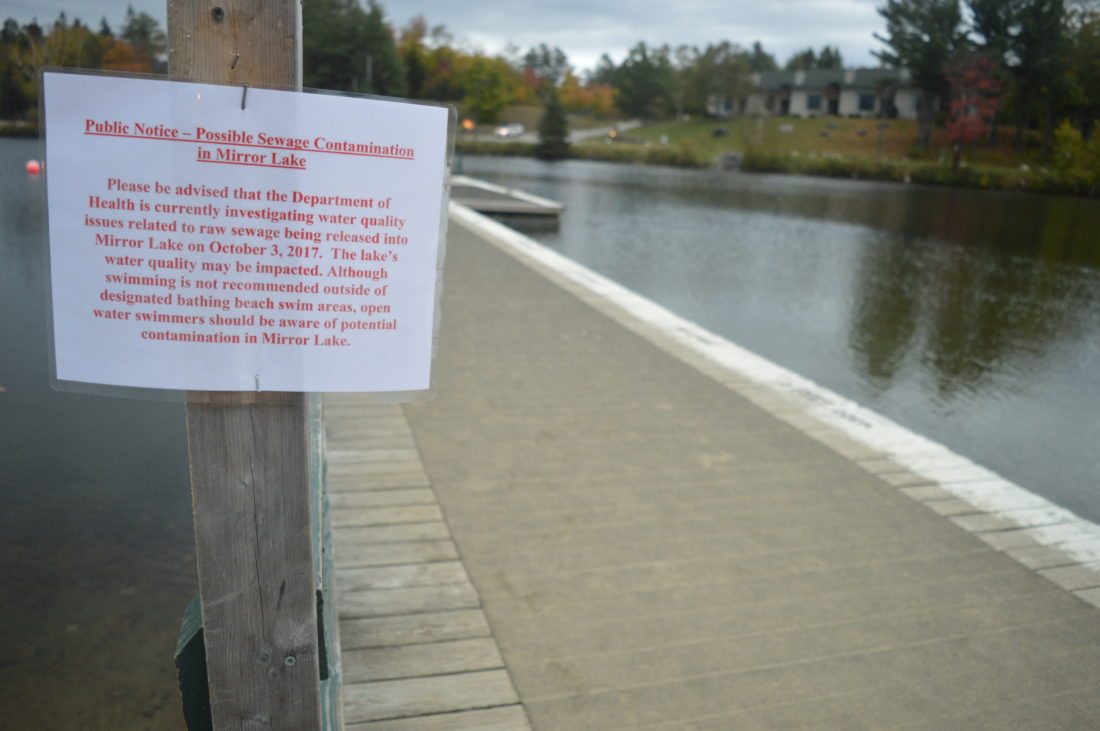 A sign posted at the Lake Placid village beach Wednesday informed people of a sewer leak and asks them to avoid swimming in the water. A day later, the state Department of Health gave the all-clear after judging Mirror Lake to be clean and safe. (Enterprise photo — Antonio Olivero)

LAKE PLACID — A day after this village posted signs discouraging people to avoid swimming in Mirror Lake, its elected leaders gave the all-clear following a state Department of Health thumbs-up.

The DOH informed village officials Thursday afternoon that Mirror Lake was clean and safe following a sewage spill into the lake that has since been repaired.

“The readings are normal,” Lake Placid Mayor Craig Randall said. “They are not seeing anything abnormal.

“I think we are pleased that the issue got addressed quickly,” he added, “and at least for the moment successfully so it won’t continue to reoccur.”

The village posted signage at beaches Wednesday advising people to avoid swimming in the lake until the DOH reported back its testing results. The leak into the lake, which Randall has called the village’s “crown jewel,” was due to a hole in an old, unused pipe that’s part of the more than century-old sewer line infrastructure underneath Main Street.

The village Department of Public Works repaired the hole earlier this week, effectively plugging the leak and stopping the sewer line runoff from entering the lake at a drainage located near One Main Street. The leak was entering near the northern terminus of the street. Village officials were alerted to the leak by Nevton Dunn of the Mirror Lake Watershed Association, who described black water and a smell near that shoreline outlet in recent days.

The hole in the old system and leak came at a bad time for the village as its board awarded a $1.2 million bid Monday to repair that system — work village officials had hoped would start this fall but is now being pushed back to the spring.

That said, Randall is thankful people informed the village of the problem, and Wiltse commended the village for quickly addressing it.

“As we continue to work down Main Street, we probably will find a number of abandoned water lines,” Randall said, “because a number of properties over the years have abandoned them. I think the spring work will give us all reassurance to give us materials in the ground to last for long time to come.”