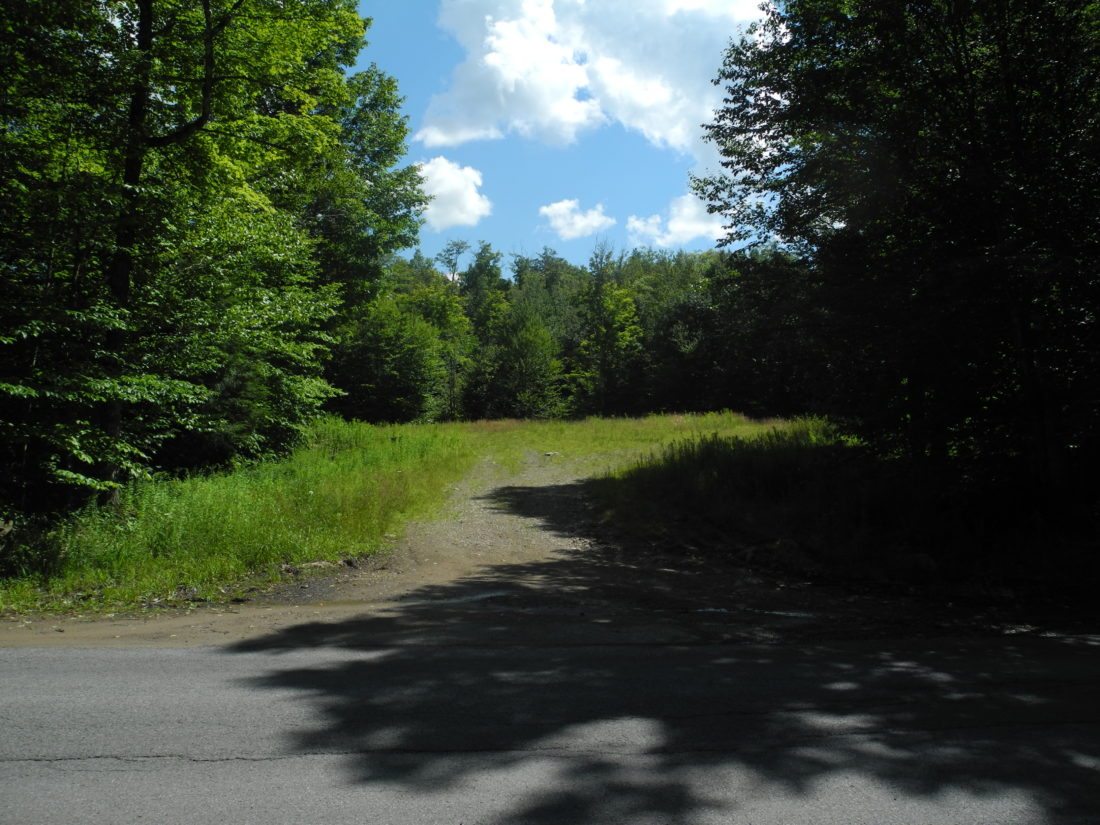 Permits have been issued to construct Pond Road, which would branch off of Lake Simond Road and lead to the Adirondack Club and Resort’s 18 “great camp” building lots in Tupper Lake. (Enterprise photo — Aaron Cerbone)

TUPPER LAKE — The Adirondack Club and Resort is one step closer to building a road to its 18 “great camp” luxury housing lots.

On Friday, the state Department of Environmental Conservation issued two permits and a certification, and the state attorney general’s office issued an amendment acceptance, gave the first phase of the large-scale project approval to continue.

Then on Monday, the U.S. Army Corps of Engineers determined it would allow construction to begin on phase one of the project.

“It means that we can start to close on the sale of lots and the people who buy them can start to build their houses as soon as they get building permits,” lead developer Michael Foxman said Tuesday.

The ACR project began in February 2004 but has stalled many times amid regulatory reviews, environmental lawsuits and developers’ financial troubles.

“The agencies have their procedures, and as we are all painfully aware, following procedures takes time and is somewhat unpredictable,” Foxman said.

There has been progress recently, however. In May, the ACR’s Preserve Associates corporation bought the land they plan to sell — 5,800 acres of land from the Oval Wood Dish Corporation Liquidating Trust, for which they paid $5.2 million. Preserve Associates also paid more than $100,000 of the back property taxes it owes to Franklin County. Then in early July, the resort donated 34 acres of that land, on the Oxbow of the Raquette River, to the Wild Center nature museum across the river.

Developers submitted final permit applications to the DEC at end of May for a State Pollutant Discharge Elimination System (SPDES) permit and a Stream Disturbance permit. These permits were turned around in short time, according to Foxman. They were issued on Friday with a Water Quality Certification under Section 401 of the Clean Water Act.

On the same day, the attorney general’s office accepted the first amendment to the project’s Homeowners Association Offering Plan for the 18 great camp lots.

These parcels, ranging from 30 to 700 acres in size, along with the 5.46-mile road, take up 3,465 acres along the eastern side of the project site. Pond Road will connect the great camps to Lake Simond Road, allowing buyers to build high-end estates on the properties.

“Several of these great camp lots are already under contract, and we have a number of interested parties looking at the remaining lots,” developer Tom Lawson, who lives in Tupper Lake, said in a press release.

Construction cannot start quite yet. According to village Mayor Paul Maroun, the state Adirondack Park Agency permit is conditional on the DEC permits, and the agency still needs to confirm the project conforms with the permit it already issued.

Unlike other parts of the project’s approval history, this will be a clear, black-and-white decision based solely on data and reports.

“Its not a subjective matter; it’s an engineering matter,” Foxman said. “We give them plans and numbers and hundreds of papers of worksheets, and they check it to make sure that our engineers did it properly.”

Many in Tupper Lake have waited a long time for these properties to start selling and the resort to start construction, knowing the project promises to bring growth to the economy and reopen Big Tupper Ski Area to the public.

“It’s a significant step forward,” Maroun said. “Obviously that will effect the village, the town and the county because once these sales are in effect, that brings in a lot more property tax for the county and the town, and hopefully it brings more people into the village.”

If built as planned, the ACR would also include ski-in-ski-out townhouses, a 60-room hotel, an equestrian center and a marina on Big Tupper Lake. Permits and construction of these other amenities would take place in the future.

For now, according to Lawson, the ACR’s long-awaited construction is set to start this year.