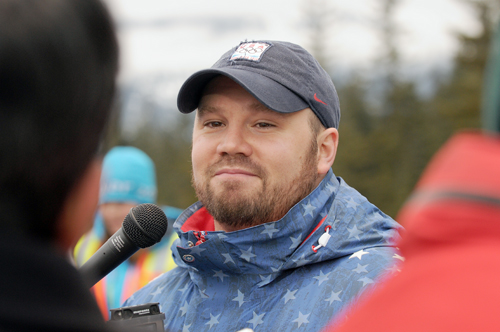 Steve Holcomb talks to the press at the Whistler Center following his historic gold-medal victory in the 2010 Vancouver Winter Olympics. His win ended a 62-year gold-medal drought for the United States in Olympic four-man bobsledding. (Enterprise photo — Lou Reuter)

LAKE PLACID — Gold-medal bobsled pilot Steve Holcomb had “a fatal combination” of a prescription sleep aid and a 0.18 percent blood alcohol concentration in his system at the time of his death, USA Bobsled and Skeleton announced in a press release Tuesday evening.

The sleeping medication goes by the generic name eszopiclone or zopiclone, and the brand name Lunesta.

Holcomb, 37, was found dead in his room at the Olympic Training Center in Lake Placid on May 6. An investigation by state police and the Essex County coroner confirmed that there was no foul play in his death and it appeared that Holcomb died in his sleep.

USA Bobsled and Skeleton released the information after Holcomb’s family shared with the federation a final toxicology analysis conducted at NMS Labs in Willow Grove, Pennsylvania.

The federation wrote that Essex County Coroner Frank Whitelaw shared the final toxicology report and a draft of an intended press release with the Holcomb family as a courtesy to ensure accuracy and to allow for feedback. Family members felt the draft included speculation beyond the scope of the toxicology report and autopsy findings, and therefore they had their attorney request the release be withheld, according to USA Bobsled and Skeleton.

“Steven’s passing is a tragedy and we are devastated to lose him,” the Holcomb family said in a statement to USA Bobsled and Skeleton. “Steven was an amazing son and brother who was loved and cherished by his family, his friends, the bobsled community and all the communities he touched around the world. We hold our memories of him close and are so proud of him, not only as an athlete but also as a person.

“He endeavored to be a role model to others,” the family’s statement continued, “and to be a kind, considerate and loving man who will be dearly missed in this world. Anyone who knew Steven knew what a private person he was despite being a public figure. Our intentions were to continue to respect his privacy, even in death. We appreciate the outpouring of love and support from around the world.”

Through their attorney, Troy-based Stewart Jones, the late bobsledder’s family threatened to sue Whitelaw if he released details. Speaking Monday evening, the day before USA Bobsled’s release, Jones said the family “didn’t feel this is a matter the public was entitled to have any information about.

“This is personal,” he said. “This is family. He is dead. Let him rest in peace.

“In death, (Holcomb) should not be meant to pay a price because he was a hero when alive,” the attorney added. “If he were not who he is, there would be no interest in him.”

Whitelaw declined to comment Tuesday on the family and the bobsled federation’s release. He said Monday the family’s decision came as a surprise to him as it was the first time, either as coroner or in his prior career with the state police, that he received a legal threat about withholding information.

He added that he was in contact with the family in the weeks since Holcomb died. The following day, May 7, Whitelaw issued a press release attributing the death to a diagnosis of pulmonary congestion — excess fluid in the lungs — based on the diagnosis of Dr. C. Francis Varga at Adirondack Medical Center in Saranac Lake. Whitelaw added at the time that Holcomb’s final cause and manner of death were pending toxicology studies to be performed by an independent laboratory, and that preliminary toxicology screen performed at AMC was negative for drugs.

Holcomb’s death left behind a gaping hole for the U.S. bobsled squad. He was a three-time Olympian, five-time World Champion and six-time World Cup overall winner. His team’s 2010 Olympic four-man gold medal ended a 62-year drought for the U.S. in bobsled’s signature race. Four years later, he added a couple of bronze medals at the 2014 Sochi games.

He was the face of the American team, but he also spoke openly about his past battles with depression, including a suicide attempt, and wrote about them in his 2012 book, “But Now I See: My Journey from Blindness to Olympic Gold.”

USA Bobsled noted that he had made many plans for the days after his death: He was to attend the Indianapolis 500 race with his father, had a trip to visit two sponsors booked for the following week, and planned to spend most of his summer training with teammates in Johnson City, Tennessee.

His mother, Jean Schaefer, said she’d heard through a friend that he planned to surprise her by coming home for Mother’s Day. She later found a package in her mailbox — a pair of light-based, energy-enhancing wearable glasses her late son had recently ordered. USA Bobsled said Holcomb was a self-described tech geek, always seeking the latest and greatest gadgets to test out. Schaefer said it was typical of her son to send packages to her house when he knew he was headed home for a visit.

“We’re still in shock and struggling to come to terms with our loss,” Darrin Steele, USA Bobsled and Skeleton CEO, said in the press release. “The sliding community is a tight-knit family, and we lost one of our brothers. The outpouring of support from around the world has helped us begin the process of healing, but his absence will be felt for years to come.

“Losing Steve is heartbreaking,” Steele added. “Steve’s a legend in the sport, and not just because of his accomplishments on the ice. You’d never know he had three Olympic medals; he was so humble. He had a quiet sense of humor that was charismatic, and he always took the time to engage with fans and to share his experiences in an honest way to help others grow and learn. He’ll be missed by all who were fortunate enough to have met him.”