Newman & Holmes to close, sell some glass business to Aubuchon 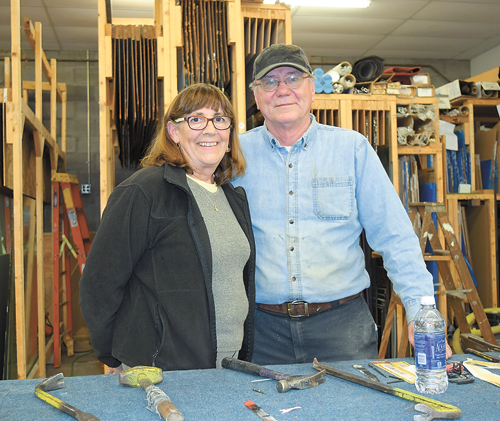 Wayne Newman, right, and his wife Lynn stand in the warehouse of Newman & Holmes on Church Street on Saranac Lake, which will close next week after more than 80 years of doing business locally. (Enterprise photo — Chris Knight)

SARANAC LAKE — Few local businesses have been around as long as Newman & Holmes.

The local paint, glass and flooring operation traces its roots back more than 80 years, during which it’s been been owned, either in part or in whole, by the same family.

Newman & Holmes has been a mainstay of Saranac Lake’s business community, thriving during boom periods such as the tuberculosis cure era and the Lake Placid Winter Olympics, and “surviving” when business wasn’t as good — and after a massive fire that took place 15 years ago this summer.

“It’s time for a break,” said Newman, who will turn 68 in July. “Forty-seven years is long enough. I want to get out while I still have some physical ability, before they take me out of here feet first.” 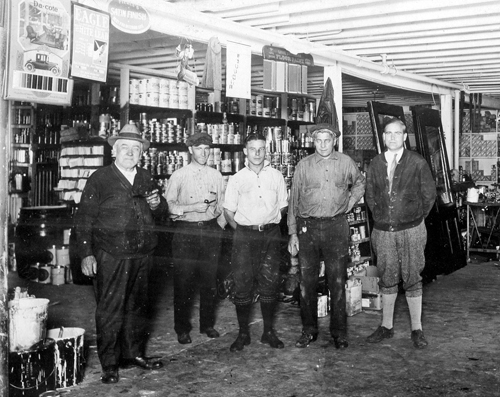 Verdo Newman, right, who with partner Rex Holmes started Newman & Holmes in 1934, stands inside the business in its former location on Church Street in this undated photo. Also pictured at left is a man named Wood, who ran the business before Newman and Holmes bought it. (Photo provided — Lynn Newman)

Newman & Holmes will close its doors for good next week, but some of its services will continue. Newman has sold his inside glass business to Aubuchon Hardware on Broadway.

Verdo Newman, Wayne Newman’s father, came to Saranac Lake in 1918 to cure from tuberculosis. He was born in West Virginia and had also lived in Batavia, New York, before moving here.

“My father came up basically to die with TB,” Newman said. “Instead, he cured of TB and started working as a painter.” 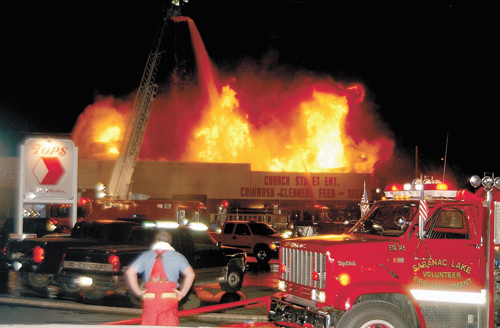 He initially worked for a man named Mr. Wood, who ran a paint supply and contracting business on Church Street, near its intersection with Bloomingdale Avenue. Wayne Newman said his father later bought the business from Wood around 1934 in partnership with Rex Holmes. That’s when Newman & Holmes was born.

“It was mostly a paint business at that time,” Newman said. “They used to have 20 or 30 painters going. That’s when they had the Saranac Inn, all the big hotels, and they were steadily busy with painting.”

The tuberculosis curing industry in the village also kept business going. Painters would be brought in after someone moved out or died in a cure room.

“That’s why a lot of these old houses have a quarter-inch of paint on the walls,” Newman said. “That was the old oil-based paint. They would use that as a sanitary-type thing.”

In 1953, Verdo Newman purchased Holmes’ interest in the business but kept the name Newman & Holmes. He added on to the building, creating several different storefronts that housed businesses like Hoffman’s Pharmacy, Tally Ho Restaurant and United Cleaners. 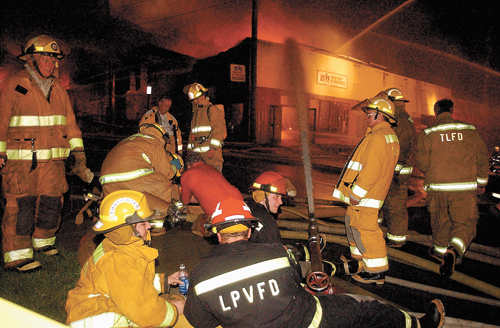 Verdo Newman operated Newman & Holmes for a total of 23 years before he died, suddenly, of a heart attack in 1957. He was 60 years old. His wife, the former Alice Sullivan, then ran the business for the next 13 years.

It wasn’t easy for her at first, according to Lynn Newman, Wayne Newman’s wife.

“Her first experience, after Verdo died, was men wouldn’t deal with her because she was a woman,” Lynn Newman said. “‘Then go somewhere else,’ she told them, ‘because I’m it.'”

The youngest of three children, Wayne Newman graduated from Saranac Lake High School and was drafted in the U.S. Army in 1968. He served in Germany and was discharged in 1970.

“My sergeant wanted me to re-up, but I said, ‘No, I’ve got a business waiting for me,'” he said. “My mother was the only one running it at the time, and I just like living in Saranac Lake.”

Apart from linoleum, Newman & Holmes hadn’t done much flooring business in those days. But when it hired a carpet installer named Mickey Gardner, that end of the business took off, Wayne Newman said. It got an even bigger bump as the venues and facilities were being built for the 1980 Winter Olympics.

“Placid was going strong because of the Olympics,” he said. “It grew. And there was less competition then. Now there’s all sorts of people. The pie gets split.”

It was in that post-Olympic era that Newman & Holmes got one of the biggest jobs it’s ever done, putting down the tile floors inside the former Olympic Village for athletes in Ray Brook, which was being converted to a prison. It went great, Newman said, except for the utility knife that he mistakenly left behind after the job was done.

“I had to go up to the warden’s office to get it back,” he said. “He gave me the knife and said, ‘Lucky we didn’t find this in somebody’s back.'”

Installing the windows for the midstation lodge at Whiteface Mountain, and working on numerous lakefront camps in the area are among other big projects the business has tackled.

The biggest challenge Newman & Holmes ever faced, however, came on the evening of July 2, 2002.

“We were up at camp,” Wayne Newman said. “Barry DeFuria from Hulbert’s called me and said, ‘Wayne you better get downtown because your place is on fire.’ We got here about 9 o’clock, and by 11 it was gone.”

It was the biggest fire the village had seen in years. More than 250 firefighters from 15 departments across the North Country responded. Crowds of people came to watch. Several businesses in that complex were lost that day: Newman & Holmes, Little City Haircutters, and the Church Street Coinwash, Cleaners and Feed and Seed.

The fire was devastating, and a years-long fight with their insurance company ensued, but the response from the community was overwhelmingly generous, Wayne and Lynn said. Local restaurants gave them food. People donated money.

“We had people coming in and just giving me $100,” Wayne Newman said. “I said, ‘You don’t owe me $100.’ They’d say, ‘Just take it. I’ll come and buy something when you get back on your feet.’ The community was unbelievable.”

The day after the fire, Wayne said he got a call from local real estate agent Phil Feinberg, who helped broker a deal to reopen the business in the former A&P grocery store at the corner of Church and Woodruff streets, where Newman & Holmes is today. It reopened within days of the fire.

“We rented it from Dr. Lieb and his group for about year; then we ended up buying it,” Wayne said.

Newman held onto the property where his business used to be located until September 2014, when he sold it to a Rochester-based company called Saranac Lake Center LLC that also bought the Tops supermarket around the same time. The site of the razed complex continues to sit vacant.

“There used to suppliers and salespeople that would come around and help you and sell you stuff,” he said. “There’s not a lot of that anymore. Now you get a phone call or whatever. People may go to the internet or to Plattsburgh. Things have changed, but we’ve managed to survive.”

The population of the village is a lot smaller now than it used to be 50 years ago, and there’s more competition for paint and flooring these days, Wayne Newman said, although the nearest glass business is in Malone. It’s also a very seasonal business, he noted.

“If you don’t make it during the summer, it’s a very, very long winter,” he said. “I don’t know what the answer is. More people would be good. The Hotel Saranac (which is being restored), that’s going to be a big help in town. I’m in favor of the other hotel on Lake Flower, if it ever gets going. I think if you build it, people will come.”

Massachusetts-based Aubuchon Hardware approached Newman more than a year ago about potentially acquiring part of the business. The Newmans didn’t accept the initial offer, but Wayne and Lynn’s son Eric, who has a business degree from Harvard, went back to the chain about six months ago.

“He asked if they were still interested, and they were, and he convinced them to take the inside glass department,” Wayne Newman said.

Aubuchon also agreed to hire one of Newman and Holmes’ longtime employees, Rick Burngasser, to run the glass business. Another longtime worker, Monica Isabella, has decided to move on from retail, the Newmans said.

“We’ve been trying to do this for probably two years,” said Lynn, a 62-year-old former teacher who retired in January 2016. “One thing Wayne said to me is, ‘I don’t want to leave my customers hanging.’ When someone came along that was willing to buy at least the glass business, I think it made it easier for him to say, ‘I can go now.'”

Since Wayne Newman announced his plan to retire and sell part of the business last month, he’s received a lot of retirement cards and congratulatory phone calls.

“I hope he enjoys his retirement, and we’re glad for the years of service,” said Art Devlin Jr., owner of the Olympic Motor Inn in Lake Placid. “My wife and I bought the motel out in ’92 and started tearing it apart and doing renovations. They’ve been an important part of every step of the way, from the glass products to paints and what have you.”

Saranac Lake photographer Mark Kurtz said he’s relied heavily on Newman & Holmes over the years for the glass to frame the photos he sells.

“They were my go-to place,” he said. “They were always so good to work with and so responsive. So from a purely selfish standpoint, I’m really disappointed, but I’m happy part of the business, and Rick, is going to Aubuchon.”

“That’s tough, but it’s not like they’re closing because it went out of business,” he said. “Wayne’s decided to retire, and I don’t blame him. He’s been there a long time. I know he’s ready to take a break.”

Newman & Holmes’ last day of operations is Thursday. On Friday, Aubuchon employees will be there to do an inventory.

Al Grytebust, manager of the Aubuchon on Broadway, said they will continue the inside glass sales and screening business but won’t sell any of Newman & Holmes Pittsburgh-brand paint, although they will continue selling its Sikkens line of stains. The Aubuchon store sells Benjamin Moore paint.

Grytebust said Aubuchon was interested in acquiring part of the business because it’s been looking for ways to grow and expand. He expects the glass business will be up and running in early June.

Wayne Newman didn’t say what his plans are for his building on Church Street once it’s emptied out. He said he could rent it or sell it.

After he retires, Wayne Newman said he plans to get to work on a list of projects he’s been putting off, including carpentry work on his family’s camp and boathouse on the picturesque Honeymoon Island, otherwise known as Newman’s Island, in the Saranac River. Wayne and Lynn also plan to stay involved in the community and travel more often to California, where their two kids and a granddaughter live.

Asked how he feels about moving on, Wayne said it’s bittersweet.