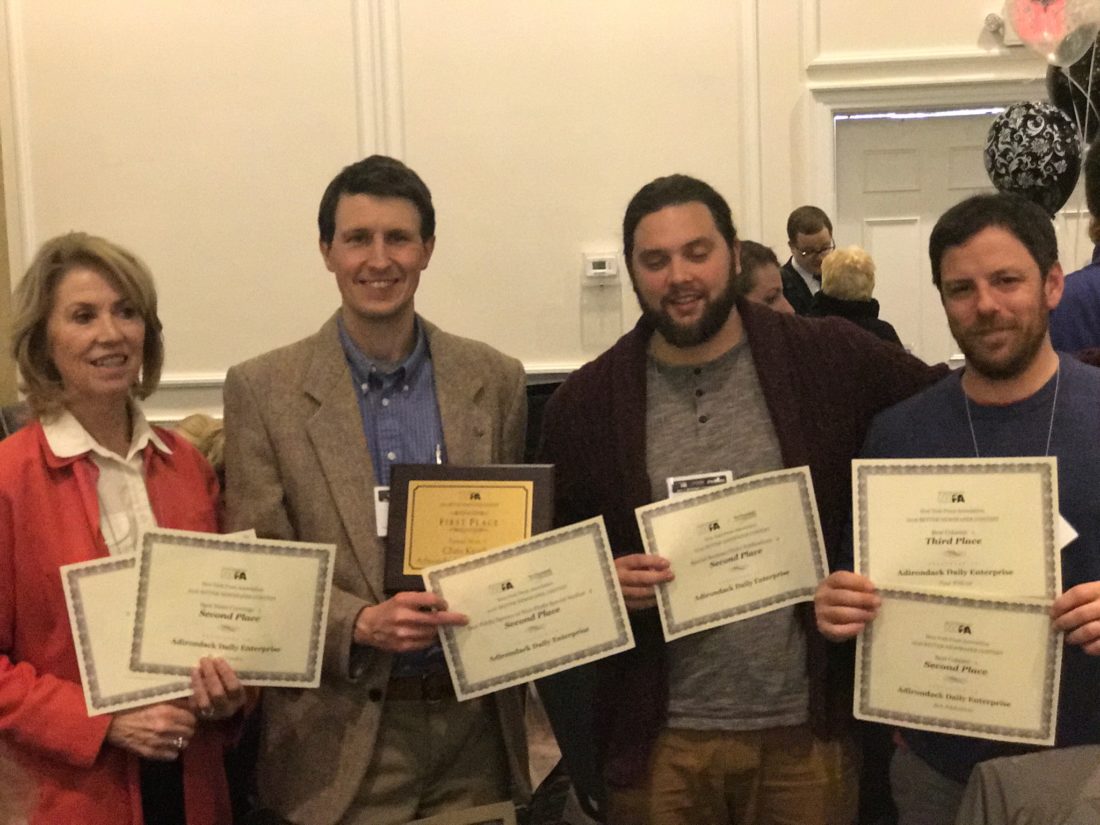 The honors were announced at NYPA’s annual conference Spring Conference and Trade Show Friday and Saturday at the Gideon Putnam Hotel and Conference Center in Saratoga Springs. Unlike some New York newspaper contests, which announce results in advance, NYPA keeps winners secret until the conference.

A second-place certificate may have been the weekend’s most prestigious honor for the Enterprise. It was runner-up in the Past Presidents’ Award for General Excellence (Division 3 of 3), behind the Ithaca Times.

“The Daily Enterprise just missed my top vote in the group,” wrote a judges, who was anonymous as is typical of such contests. “They are doing a great job in all categories judged … with local community engagement and content, the lifeblood of the industry.”

Senior Staff Writer Chris Knight won most individual awards for the paper, with three, and he was involved in two other staff efforts. He took both first and second place in one category, for the best Feature Story (Division 1 of 6).

The first-place award was for a tale of a practical joke Saranac Lake volunteer firefighters pulled on their chief: They stole his ventriloquist puppet and moved it arounds the U.S., posting a trail of Facebook photos.

“It was very well written, and despite not knowing the town or the players, I remained interested throughout the story,” the judge wrote.

Knight’s second-place feature was about John “Hawkeye” Hawkinson, who left behind barns full of valuable antique cars when he died.

“Wow!” the judge wrote. “Impressive story and beautiful writing. I really get a picture of who ‘Hawkeye’ was and what made him — and his cars — so special.”

Knight also won a third-place award for Coverage of Health, Health Care and Science, a category in which all papers competed together, regardless of size. The varied selection of stories Knight submitted “matter to the readers, which is what we’re all supposed to strive for,” a judge wrote.

Reporter Antonio Olivero won first place in the Feature Photo category (Division 1 of 3) for an image of a hiker on a mountaintop at sunrise, using a tree branch as a selfie stick to take a picture of himself. The photo ran with a story Olivero wrote titled “46ers in the social media age.”

“Awesome composition,” the judge wrote. “The colors are great, and it illustrates the story nicely.”

Advertising representative and graphic designer Lindsay Munn won a first-place plaque in the Recruitment Special Section category (Division 2 of 4) for a 12-page guide to the Tri-Lakes Job Fair.

“A great break from ordinary news reporting,” a judge said of the Emptyprize. “More publications should produce such a light-hearted issue.”

Managing Editor Peter Crowley took second place in Spot News Coverage (Division 1 of 3) for “Armed standoff,” an article about a distraught man who drew police into a high-stakes showdown by brandishing what turned out to be a fake pistol in front of his apartment high-rise. A judge said Crowley covered it “from all the angles, providing rich detail from on-the-scene reporting and compelling action photos to accompany his narrative. Crowley had this story surrounded.” The judge added that interviews “helped humanize the subject and explain his troubled past.”

“Reading Bob’s columns made me want to invite the guy over to sit on my front porch and talk,” a judge wrote of Seidenstein’s “The Inseide Dope.” “This sampling of his writing only whetted my appetite for more. Great examples of the art of newspaper column-writing, the focal point of which is always the story and the feelings those stories bring about.”

What set Willcott apart, the judge wrote, “were his storytelling style and his knack for finding a good story to tell.”

The Enterprise, based in Saranac Lake, was founded in 1894 and is the only daily newspaper published from inside New York’s 6-million-acre Adirondack Park.

“I’m proud to say our staff dispelled today’s negative perception of the media with these numerous awards,” said Catherine Moore, the Enterprise’s publisher since 1989. “It shows they have made a difference with their deep commitment, sense of purpose and engagement in the community in which they live. I feel privileged to have such an impressive team that keeps our communities informed better than many of the larger media outlets.”

The NYPA used to only represent weekly newspapers but now includes dailies as well. Its contest is one of three the Enterprise enters annually; the other two have not yet announced their winners for 2016.