These snowshoes aren’t made for racing 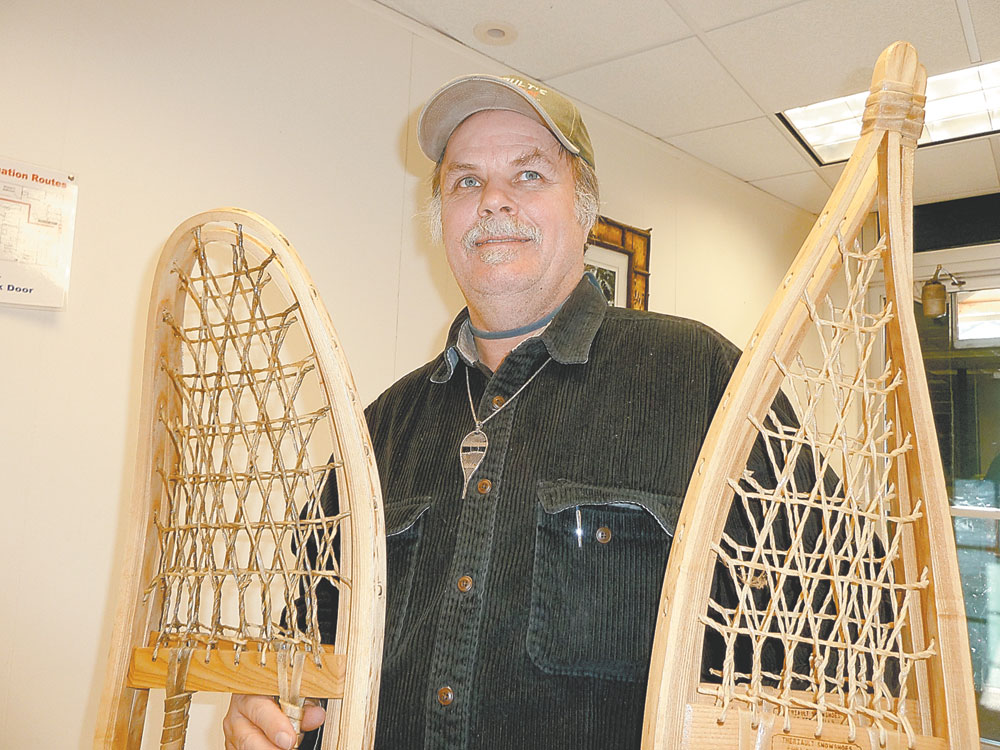 Brian Theriault of Fort Kent, Maine, displays snowshoes he made that are almost as tall as he is Wednesday at the Enterprise office in Saranac Lake. (Enterprise photo — Peter Crowley)

SARANAC LAKE — Among the people arriving in town already for this weekend’s World Snowshoe Championships is Brian Theriault, who makes snowshoes the traditional way in northern Maine.

Theriault lives in Fort Kent, at Maine’s northern tip across the St. John River from Canada. He is of Acadian heritage, speaks French and said his business got valuable exposure from the World Acadian Congress his hometown hosted in 2014. He and his father have won several fellowships for their work through the Maine Arts Commission.

He’s here to sign and sell copies of “Leaving Tracks: A Maine Tradition,” a book he and his father Edmond, now 93, wrote about the craft they’ve honed over the last 45 years. The book signing is not on the official World Snowshoe Championships schedule, but he said it will be from 10 a.m. to 5 p.m. Friday in the Saranac Lake Free Library’s Cantwell Room.

It’s an opportunity to hear a master show and tell about the details of how he makes “raquettes a neige” in the old Native American way, with wood and rawhide leather in his shop rather than with metal and plastic in a factory.

The snowshoes Theriault showed off at the Enterprise office Wednesday are certainly not made for racing. They were gigantic — almost as tall as him.

“These are made to walk in deep snow,” he said.

At times when snow in the woods was many feet deep — this week is not a good example — this footwear would have come in handy for hunters, trappers, explorers, soldiers and maple sugarers.

Theriault said he selects trees with care and doesn’t steam the wood to bend it.

“That means all the grain is running together strong,” he said.

He takes similar care with the cow hide, pre-stretching it and weaving it into specific patterns. The patterns he showed the Enterprise staff Thursday were traditional, but some fancier ones can be seen on his Facebook page.

“I’m one of the last few in the world that’s doing this,” he said. “I’m keeping it alive.”