Guests convened with food and drink in the generator-lit lobby of the Golden Arrow Resort, a couple dozen remaining past the midnight hour Sunday during the 19-hour blackout. Like many other hotels, hallways and guest rooms at the resort were without light during the outage. (Enterprise photo — Antonio Olivero)

People walk on Main Street in Lake Placid Saturday night during a blackout in the village that lasted more than 19 hours. (Enterprise photo — Antonio Olivero) 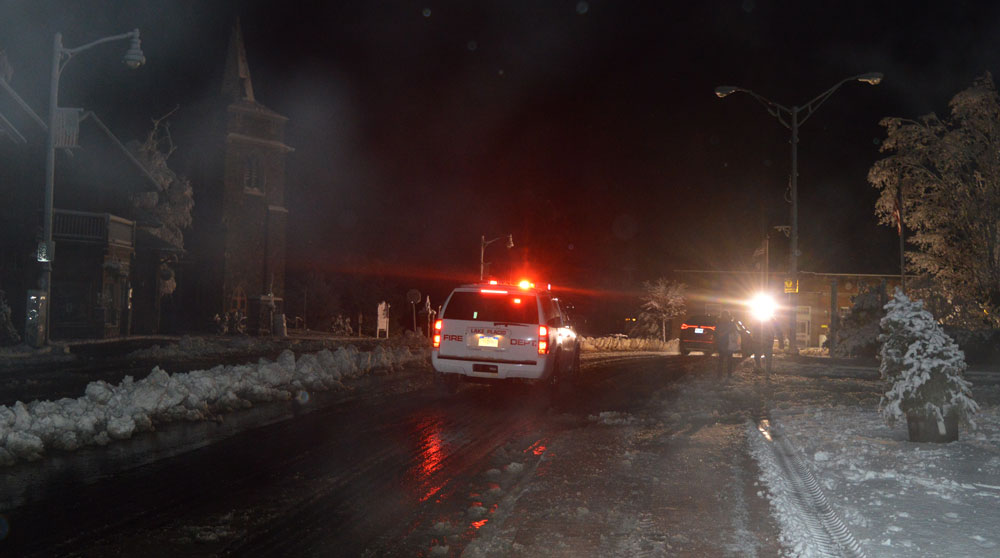 LAKE PLACID — Monday was the calm after this unseasonably warm weekend was blitzed by what longtime Lake Placid electric Superintendent Peter Kroha called “a perfect storm.”

A day removed from the end of the 19-plus-hour overnight blackout put a dark and cold exclamation point on a busy Presidents Week, Kroha, village police Chief Bill Moore and others in the village recounted their emergency efforts while also pondering what can be done to prevent a similar power outage in the future.

Across the street from the North Elba Town Hall, Central Garage general manager Jay Strack said the focus should be on what Lake Placid’s “Plan B” is to not have another near-24-hour outage — if there is a back-up plan at all.

“Maybe go underground, maybe come from a different direction — something,” Strack said. “Because stop and think about it for a second — Lake Placid. We held two Olympics. We are the winter sports capital of the world. We had tourists galore here this weekend — hockey teams, (other) people coming here, Presidents Day week. (And) out of the Tri-Lakes, we were the only village without any power? Dead in the water. Why? In today’s world, why? I’m not saying or pointing fingers at anybody. I’m saying, let’s come up with another plan.”

Like many others, Saturday night was an all-night ordeal for the every-busy Strack, as he helped seven cars stranded off the road on his way back to the village from picking up a generator from Parkside Supply in Wilmington. The calls weren’t planned, as they typically are. Rather, they were sudden cries for help when the lights went out and temperatures plunged. 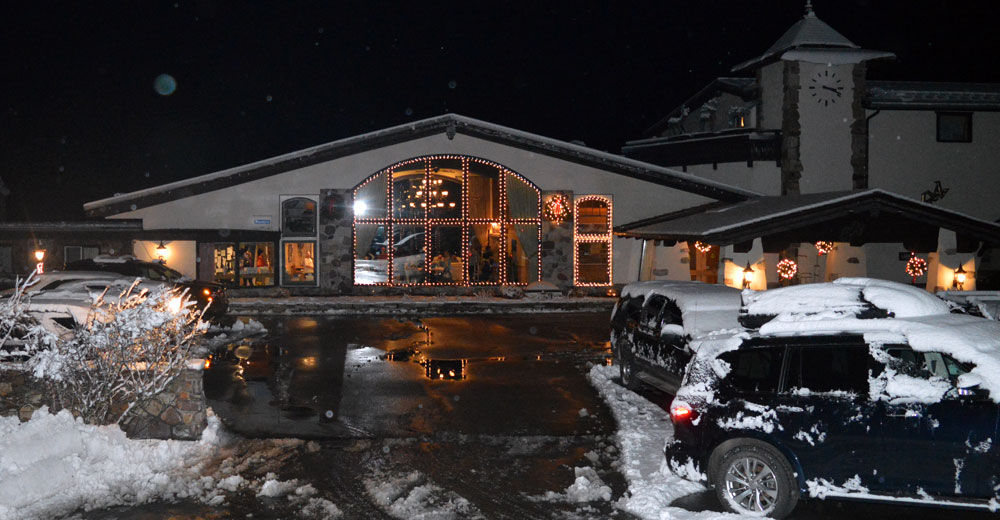 Guests convened with food and drink in the generator-lit lobby of the Golden Arrow Resort, a couple dozen remaining past the midnight hour Sunday during the 19-hour blackout. Like many other hotels, hallways and guest rooms at the resort were without light during the outage. (Enterprise photo — Antonio Olivero)

Strack’s account of early Saturday evening paints the picture of just how freaky the effects of this winter thunderstorm front were on this mountain village at 1,800 feet. For the first time since the 1998 ice storm, village and state police closed all three of the major arteries leading into downtown, Moore said. He added that at the storm’s crescendo, North Elba Supervisor Roby Politi, who was with emergency personnel, considered declaring a state of emergency several times while communicating with Gov. Andrew Cuomo’s office.

“But I don’t know if it would have made any difference,” Moore said Monday afternoon.

Not only was Lake Placid getting snow, it was getting clumps of the heaviest snow in sometime, piling up as thunder reverberated through the humid air. It led to whiteout conditions that quickly made nightfall driving impossible on state Route 86 between Lake Placid and Whiteface Mountain and state Route 73 through the Cascade Pass. It was so bad, Moore said at one point a state DOT plow was turned sideways on a stretch of road between the Cascade Lakes and the Olympic Sports Complex at Mount Van Hoevenberg. 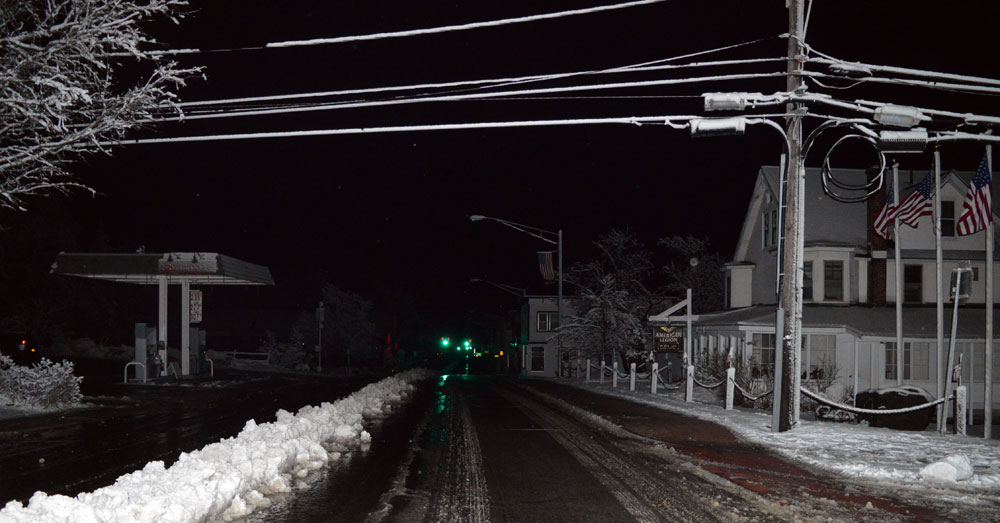 And at what point did police know it was time to blockade traffic from driving through the Wilmington Notch?

“When the road got so bad the fire truck couldn’t get down it,” Moore said. “We had, at one time on the Wilmington Road, Route 86, our fire truck reported eight cars off the road, and it just turned to glare ice. And the plows were having a difficult — nobody really, when we called for the state to come out, they said, ‘Well we really didn’t expect to have anybody come out. It was nice today.’ Not in Lake Placid. The elevation made a big difference. Just the short distance — in Keene, it was normal.”

Strack was one of those people out traversing the whiteout and glare ice, which he said turned like a light switch once he reached Whiteface Mountain. With 20 vehicles stopped between the entrance to the ski center and Lake Placid, Strack wondered where the state DOT was as he instructed AAA and local businesses to contact him on his cell phone for tows during the outage.

“I was helping people because I was out on the road,” Strack added. “… I think the biggest issue that there was was it was three-and-a-half hours after it started snowing that the state DOT came out. They didn’t come out for three-and-a-half hours. There wasn’t a truck that came by (Central Garage) for three and a half hours, from 3:30 p.m. till 7 o’clock. I don’t know what was going on, or why. I don’t think it was snowing in Saranac Lake as bad as it was here, I know it definitely wasn’t snowing in Wilmington, nor in Keene.” 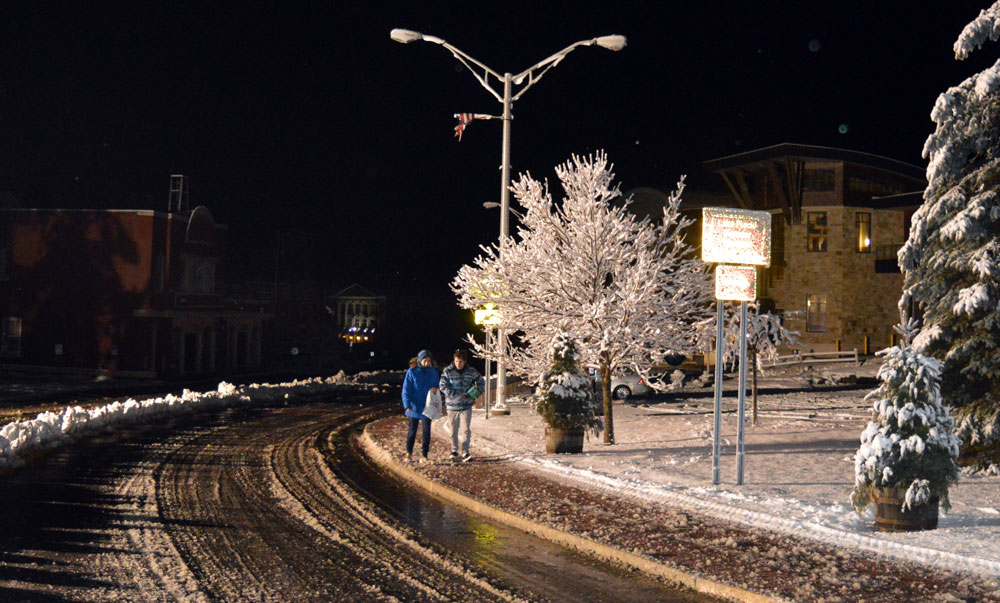 People walk on Main Street in Lake Placid Saturday night during a blackout in the village that lasted more than 19 hours. (Enterprise photo — Antonio Olivero)

And headed out toward Saranac Lake, Moore said it was an endless effort for police and firefighters to clear one tree after another from the roadway.

“You’ll see the tree balls, they just kept falling,” he said. “We’d go through and clear them, and there would be four more trees down. It was just a constant. The state police were doing the best they could; our people had the saws.”

Moore said village and town emergency personnel rallied, though: four trucks raced throughout the village while others set up a makeshift headquarters of sorts at the fire department on Old Military Road. He said he was proud that first responders, such as fire department head driver Matt Colby, raced out to the ski jimps to resolve a generator so that emergency personnel had radio communication, as well as officers working to keep village water and sewer systems on line, which he said never went down.

As the night grew later and tourists’ calls started flooding into the village, Moore said police at one point fielded 308 calls in a two-hour span. In total, he said the village used 500 gallons of diesel fuel to keep generators on line, and he commended Olympic Training Center Director and North Elba Councilman Jack Favro for opening up the OTC gym as a shelter.

Moore said, to his knowledge, at least six people utilized the shelter, which was outfitted with cots. He added other officials such as Lake Placid school Superintendent Roger Catania and state Olympic Regional Development Authority CEO Ted Blazer offered up their facilities as shelters, though neither was needed.

Strack said he wouldn’t be surprised if the village as a whole lost millions of dollars in revenue due to the blackout. Downtown Diner owner Gioia DiChristina estimated her restaurant, closed Sunday, may have lost $5,000.

Three-and-a-half miles from the fire department, Kroha said National Grid and village electric employees were stationed near the Saranac Lake Golf Club to access the remote location where the power line was severed.

Kroha said National Grid contracted Northline Utilities of AuSable Forks to hand-climb the powerline’s poles to repair the difficult fix. Kroha said crews worked through the night to be ready to safely enter the wilderness and clear lines only after the storm died down. He added that the main connection to the village was restored over a 10-minute period around 10:30 a.m., while 99 percent of the village’s other isolated incidents were back on-line by 3 p.m., with the bobsled and luge track connected last.

Kroha, who will retire next month and has served the electric department since the line was constructed amid much controversy in time for the 1980 Olympics, said the location of the line break was “by far probably the worst spot in the whole transmission line between here and Lake Colby.

“Because they had to walk in — they actually came in from the Ray Brook side by the golf course,” he said. “I mean, it was a hard job, and the way the wind and everything was going, you saw the trees down, I mean, between here and Saranac Lake it looks like a cyclone went through. The guys did an excellent job. They stayed right to it until every customer was on, my (seven-person) crew.”

Kroha said Northline had to bushwhack part of the way while carrying their gear in. It was then an arduous task dropping and splicing wires.

“We sent them over (from the village power plant) at 1 a.m.,” Kroha said. “… The pole didn’t go down; the wire broke so they had to climb the pole, temporarily dead-end the wire — hold the wire off. A tree hit it. …But there is a whole protocol of safety. Especially in storms, safety is the first concern.”

Looking ahead, Kroha hears the concerns of villagers like Strack. But the longtime superintendent said the only way a situation like this can be avoided in the future is if the atypically narrow right-of-way through which the powerline travels — state land — is cut back further. A request for comment left with a state Department of Environmental Conservation spokesman was not returned as of Monday morning.

“The problem with the right of way is to have that right of way for the Olympics, we had to go down the train tracks, and it’s a very, very narrow right of way,” he said.

“Normally when they build transmission lines, they cut back 50 to 60 feet — both sides — of any trees,” he continued. “This is like 10 to 15 feet, and it’s state land. National Grid went in and marked a lot of trees to be cut, back in — right after the ice storm (around 1999) — and we were only allowed to cut a portion of those trees because it’s on state land.”