Despite dire finances, Jamaican bobsled team has eyes on Pyeongchang, tries to raise $60,000 to hire coach 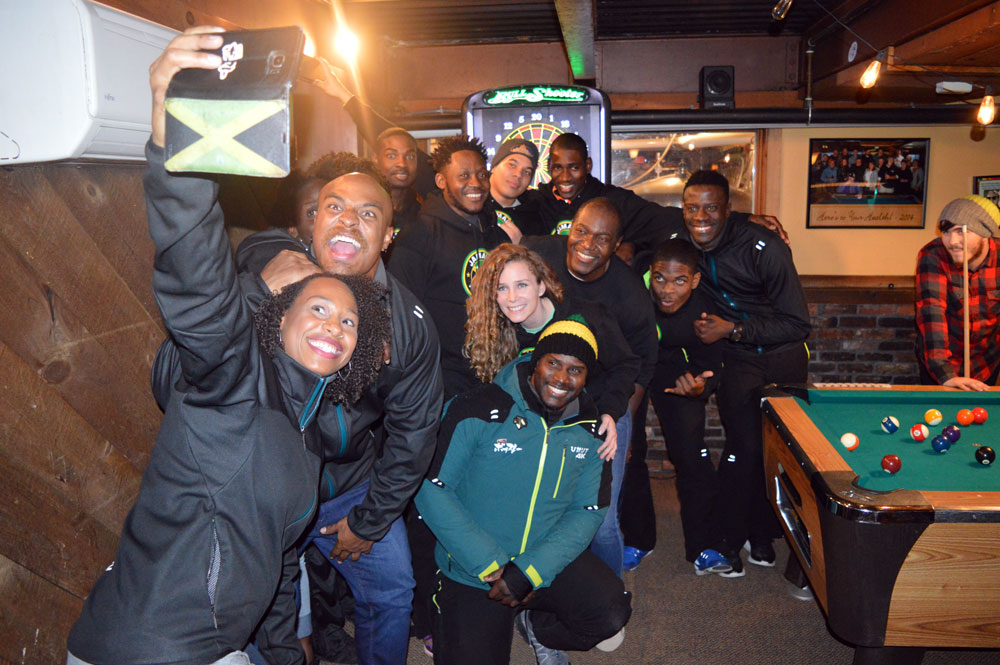 Jazmine Fenlator-Victorian, a former U.S. Olympian in bobsled, takes a selfie with the Jamaican bobsled team during a fundraiser Monday at the Lake Placid Pub & Brewery. Fewer than 400 days from the 2018 Olympics, the team is trying to collect $60,000 in donations to hire a coach. (Enterprise photo — Antonio Olivero)

LAKE PLACID — The partiers danced on for the Jamaican bobsled team as Monday night became Tuesday morning at the Lake Placid Pub & Brewery.

Here they were during the early morning hours of Jan. 24, safe from the freezing rain in the cozy confines of the first-floor bar. They settled on a billiards table as their place of assembly. Four minutes past midnight, former U.S. Olympian Jazmine Fenlator-Victorian took out her iPhone to capture a selfie of the 13 teammates. She raised it up to show a phone case with a design of a yellow diagonal cross and four green and black triangles: the Jamaican flag.

Like every member of the Jamaican bobsled team, Fenlator-Victorian knows Lake Placid well. Jamaican bobsledders train and compete in this Olympic mountain village often while they pursue their Olympic dreams. Some even live here, such as 24-year-old brakeman Tyrone Mullings.

But for Fenlator-Victorian, a 31-year-old New Jersey native, this moment in time in Lake Placid was different.

The unofficial reason they were here was to celebrate her and Carrie Russell’s third-place finish in that afternoon’s North American Cup event at the Olympic Sports Complex at Mount Van Hoevenberg. It was a breakthrough accomplishment as the duo eyes becoming the first Jamaican women’s team to compete in the Olympic Games.

The official reason, though, was to help raise funds for a new coach. The team is still more than $57,000 short of the $60,000 goal they set on their GoFundMe campaign page, www.gofundme.com/jamaicabobsled.

“With Team USA, you’re at a hotel that has room and board, so you share a room with one person,” Fenlator-Victorian said. “With our team, we stuff air mattresses and cots around Airbnb houses — and sometimes if the basement is open, it doesn’t even have Sheetrock on the walls, and we are all stuffed in the basement trying to sleep, and it’s freezing.

“I knew it was tough for the Jamaicans for sure when I was with Team USA,” she continued, “but I didn’t realize coming into this season we weren’t as successful as we thought we’d be with our funding. The government of Jamaica isn’t providing us money, nor the Olympic committee. Where Team USA gets a couple million dollars from the United States Olympic Committee, Team Jamaica gets zero from the olympic committee.”

Such is life for a have-not in the world of Olympic sports.

Despite tight-knit relationships between the U.S and Jamaican teams — bonds built in this village, which is the American team’s official headquarters — what constitutes as financial difficulties for Olympic sports in the two countries are worlds apart.

For Jamaica, the team receives such little government funding that not only are they without a coach 376 days before the Pyeonchang Olympics, but they often ration amount as paltry as $120 to feed a dozen people over a week.

“And it worked,” said Murray Myers, a 30-year-old brakeman and former member of the Jamaica Defense Force who drives the team’s van, which broke down in November while driving to an event in Calgary.

“People were losing weight (that week),” Myers continued. “I lost about three pounds.”

Fenlator-Victorian competes on the same tracks she raced as a member of Team USA, but this is nothing like the Olympic pursuit she experienced at the 2014 Sochi Olympics, when she was paired with famous Summer Olympic hurdler Lolo Jones.

On the Jamaican team she is joined by her husband Surf Fenlator-Victorian, who also aspires to compete in Pyeongchang next year. The couple currently doesn’t have a home, living wherever training takes them.

She has set up an online fundraiser of her own to finance her Olympic dream at www.rallyme.com/rallies/4098/teamjaz. Like the team, she’s also well short of her number, having raised just over $2,000 of a $30,000 goal.

Still, Fenlator-Victorian uses the page to break down in precise detail what donations would go to — such as, say, $1,100 in airfare to fly to Lake Placid, $1,000 to ship a sled to Russia and $270 to use a weight room while in Lake Placid.

Even with the lack of contributions, Fenlator-Victorian has dubbed her fundraiser “Cool Runnings 2” in honor of the 1993 John Candy comedy film that made the Jamaican team famous.

Excited mention of the Disney movie is the token response these athletes get whenever they wear their black team hoodie sweatshirts in whatever town they travel to next. A member of that famous 1988 team, Devon Harris, remains with the national program, now serving as its secretary general even though he lives in Rockland County, New York.

At the brewery Monday night, Harris emphasized how this new crop of athletes puts their “dreams before their wallets,” much like he did three decades ago.

“Sometimes I wonder to myself, ‘How do they do it?'” Harris said. “And I go, ‘Oh, yeah, I did the same thing. And what I mean is the tremendous personal sacrifice they make to be on the circuit and to learn this sport that is total alien to them.”

For the team’s newest member, Kathleen Pulito, the movie was also one of the only things she knew in July when she signed on as the team’s director of social and digital media and public relations. When the team gathered for the photo by the billiards table, the Syracuse native joined in as if she had been sledding with them for years, but the team members had never met her in person until nine days prior. For months, she interacted with the team only via a group Facebook message.

She was brought on per the recommendation of her friend, Todd Hays, the Jamaican team’s short-lived former head coach and an Olympic silver medal-winning American bobsledder. Hays had to leave the team after just one season in 2014, when the national program couldn’t find the funds to pay him.

Still, Hays remains as a “pseudo” coach, as Pulito puts it, helping at events such as Monday’s North American Cup. Hays was at the brewery Monday night to celebrate with the team and his former American pupil, Fenlator-Victorian.

Without a coach, the lifer Harris and newbie Pulito are currently caravanning the team across the Northeast on fundraiser stops to raise money. They are doing it out of the kindness of their hearts, as Pulito isn’t compensated other than the 10-percent commission she receives for any sponsorship she helps secure.

If they are to raise the $60,000 for a coach, Harris said he has someone in mind for the position, though he declined to name who.

In the shadow of this Olympic sports village, one where the might of the American Olympic machine is on full display, the Jamaican team’s Olympic dream is as strong as ever nearly three decades after they debuted at the 1988 Calgary games.

And though their pockets may be light of cash, when asked if he had a message for the rest of the world, Harris thought for five seconds before exemplifying the team’s undying dream.