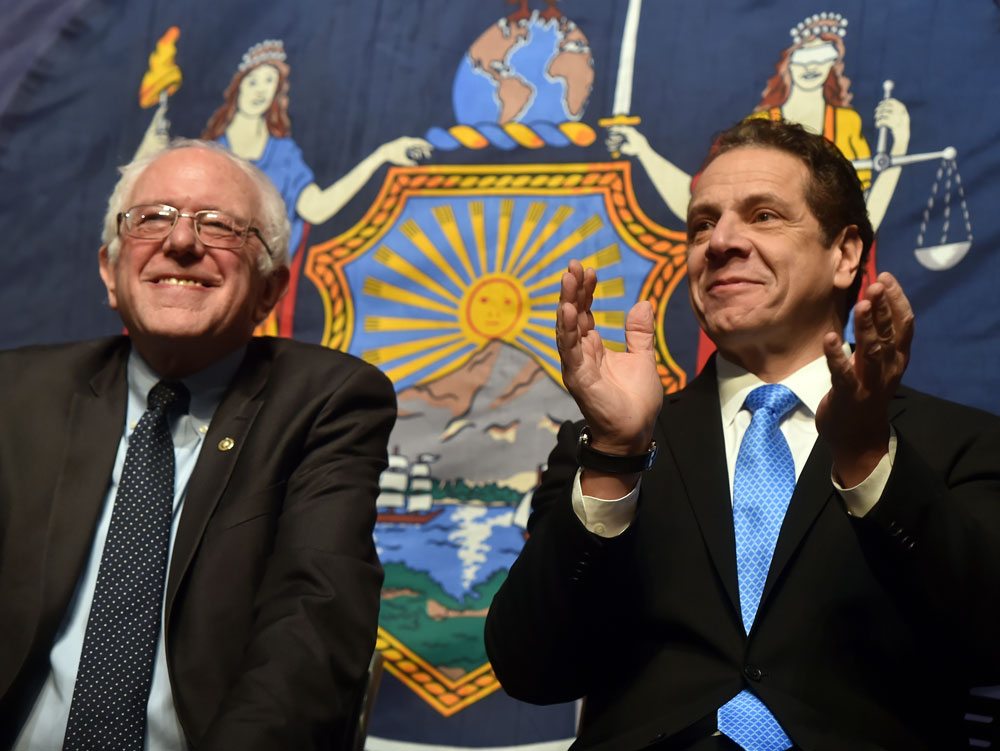 Hundreds of thousands of New York students would be able to attend college for free under a proposal announced by Gov. Andrew Cuomo to make state universities tuition-free for residents earning $125,000 or less.

The Democrat unveiled his plan today at LaGuardia Community College in Queens alongside U.S. Sen. Bernie Sanders of Vermont. Sanders, who pushed for free tuition at all U.S. public colleges during his Democratic presidential campaign, called Cuomo’s proposal “revolutionary.”

“It should be a wake-up call to this nation,” Cuomo said, “to say if you really want to be competitive globally, we have to have the best educated workforce, and that means we have to have college for every child, man or woman who wants to attend.”

Concerns about the nation’s collective $1.3 trillion in student loan debt — more than either credit card or auto loan debt — have prompted the federal government, states and some schools to offer debt forgiveness or relief programs. Tennessee and Oregon have enacted programs to cover residents’ tuition costs at community colleges, and some cities have tuition-free programs for eligible students headed to certain colleges.

Under Cuomo’s more expansive plan, an estimated 940,000 New York households with college-aged children would be eligible. The program would be phased in over three years, beginning this fall, with those earning up to $100,000. About 80 percent of all New York households earn less than the $125,000 threshold.

The program would cover tuition costs that remain once other state and federal aid is applied, at an estimated cost of about $163 million per year, Cuomo’s office said.

“If New York state does it this year, mark my words, state after state will follow,” Sanders said.

New York has the nation’s largest public university system, with 440,000 students spread among 64 campuses across the state.

Members of the Assembly’s Democratic majority have sponsored similar proposals in the past, said spokesman Michael Whyland, who called affordable higher education a priority.

“While we will have to review the specifics when the governor releases his Executive Budget, this proposal appears to move us in a positive direction,” spokesman Scott Reif said.

New York has the nation’s largest public university system, with 440,000 students spread among 64 campuses across the state.

“A college degree is essential in today’s job market,” said Rice, whose mother used to be president of North Country Community College. “This is particularly important in rural counties where the median family income is well below the state and national average. In addition to training the workforce of tomorrow, it will benefit our two and four year institutions by boosting enrollment.”

“Governor Cuomo’s proposal to make college tuition free to middle class New Yorkers is bold, profound and exactly what we need as a state and nation to make our next generation of workers globally competitive without shackling these young people with lifelong debt,” Rabideau said. “It’s an exciting and pragmatic path for other states to follow.”

The Enterprise staff added Rabideau and Rice’s comments to this report.