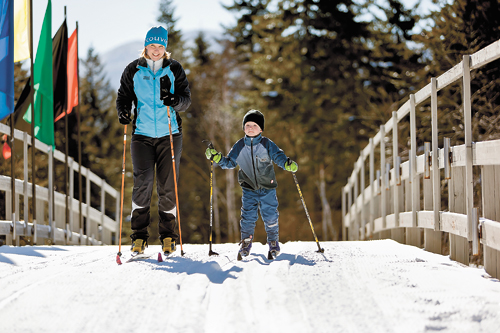 After an anemic winter last year, the 2016-2017 ski season is off to a rollicking good start. Skiers and boarders look to be in for a treat with this year’s early snowfall and ideal snowmaking conditions.

The following is a roundup of how local ski centers are shaping up for the winter.

Whiteface Mountain has been open since Thanksgiving Day, and now has more than 20 trails open. General manager Aaron Kellett said Wednesday that snowmaking would begin in earnest at the top of the mountain this week. 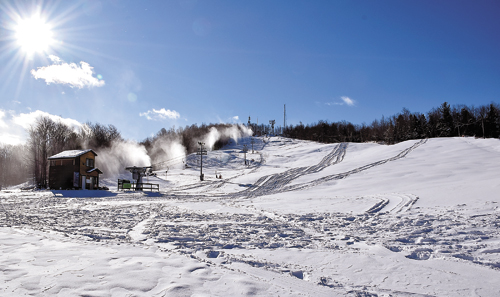 Snow guns were in full operation at the village-owned Mount Pisgah Ski Area in Saranac Lake on Thursday in anticipation of its opening day. (Enterprise photo — Justin A. Levine)

Kellett and ORDA senior vice president Jeff Byrne told reporters this week that new, efficient and self-contained snow-making machines are working full-time to increase the snow base. This effort has been helped by a lot of natural snowfall already this season, and led to the mountain opening several more trails on Wednesday morning.

Kellett also said that while the snowmaking will be moving uphill, their focus is on the beginner and moderate terrain lower on the mountain so that it is ready for all the skiers by Christmas week.

The mountain is boasting new menus at several of its cafes, and hopes to attract more clientele with its off-trail amenities, which Kellett said have become as important in attracting visitors as the quality of the snow and terrain.

Whiteface was named the number two resort in the East in this year’s Ski Magazine reader’s poll.

For more information, go to www.whiteface.com. 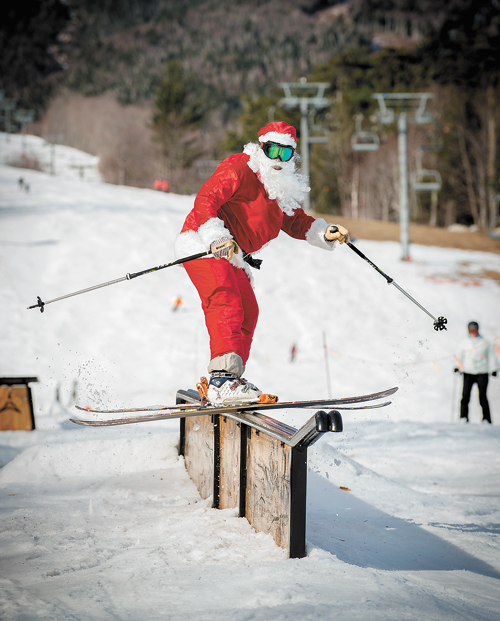 A skier in a Santa costume takes on one of the terrain park features at Whiteface Mountain last Sunday. About 300 people took advantage of the Santa Ski Free Day promotion to earn a free lift ticket at the mountain. (Photo courtesy of ORDA)

Titus Mountain Family Ski Center near Malone will open for the season today, and marketing director Brittany Taylor says the mountain looks better than ever.

Taylor said she thinks the full mountain will be skiable on opening day, but that some of the glades might be a little thin in cover.

“We’re looking to have the full mountain” open Saturday, she said. “Which is pretty exciting.

“We have gotten some snow over the past week. We make snow on the regular groomed trails, (but) I just got a call from the owner who toured the mountain and said 100 percent of the terrain would be ready for opening day.”

To find out more about conditions at Titus, visit www.titusmountain.com

Snow guns were blazing at Mount Pisgah this week, which is a good sign for the village-owned family ski and tubing center after last year’s paltry snowfall.

Pisgah manager Garrett Foster wasn’t immediately available for comment Thursday, but told the Enterprise last week that he hoped the mountain would be open for the start of school vacation.

“With a little help from Mother Nature and a week of snowmaking, we’d like to open for the beginning of the school break,” he said.

“Not much has changed, hours-wise,” Foster said. “Our office is open now on Tuesdays and Thursdays from 5 to 7 p.m. for season tickets and locker rentals.”

“It’s looking pretty good, every flake is precious,” Dewey Mountain manager Jason Smith said Thursday. “These four inches we just got will help cover up the little thin patches, it will definitely help a lot. We were skiing before and we were packed, but this will definitely help.

“We’re way ahead of last year.”

Smith said the crew at Dewey grooms the lower part of the mountain, and that the upper part is considered backcountry-style skiing.

Smith said the youth ski program is underway and that the ski area has already been renting equipment.

“That’s just such of a bonus for us, it’s not something that always happens, but we’re super excited to have that happen.”

Operated in the last several years by a group of volunteers, Big Tupper is unlikely to open this season due to funding shortages, Jim LaValley told the Enterprise recently. LaValley leads the Adirondack Residents Intent on Saving their Economy (ARISE) volunteer group, which has operated the mountain in the past.

Big Tupper does not have snowmaking, relying instead on natural snow. But even with the good start this season, LaValley said that coming up with the $130,000 to $150,000 required to run the mountain is a challenge. Those costs are for insurance, maintenance, inspections and electricity and includes the labor of all the volunteers.

The free ski trails at the Tupper Lake Country Club are now mostly open for cross-country skiing, with more than 5 inches of fresh snow on the ground.

The Golf Course, Cranberry Pond and Little Logger trails have been groomed, but no tracks have yet been set.

The Hull’s Brook trail is not open to skiing yet, but a post on the country club’s blog says that snowshoers are welcome on the trail to help pack it down.

The trails at the country club are free to use, but the village does accept donations.

“We have a sign-in box at the pro shop. Please use this so we can get accurate info on the number of visits we receive,” the site says. “It justifies the funding, and keeps it free. Donations are welcome, and you will find envelopes there in the box.”

For a trail map and more information, visit www.tupperlake.com/activities/tupper-lake-groomed-xc-ski-center.

Mount Van Hoevenberg outside of Lake Placid has all 50 kilometers of trails open and groomed, according to front desk supervisor Crystal Lamarque.

“If you think of this time last year, we weren’t even open,” Lamarque said. “The whole season last year was like a week here, a day there.

“Everything has been packed, everything will be tracked by the end of the day,” she said Thursday. “Everything is really in great condition.”

Lamarque said the ski center has been busy so far, and they are anticipating a very busy holiday season.

“During the week we tend to get more season pass holders, but Christmas week we plan to be very busy,” she said. “And that will go to well after the New Year.”

Van Hoevenberg will also have a Snow Factory snowmaking machine at its disposal this season. Olympic Regional Development Authority President Ted Blazer said the machine is being leased for $90,000 for the season and is expected to be used at least through June to add to the ski area’s base.

Van Ho is also welcoming back Green Goddess Natural Foods as the food and beverage vendor for the area.

“They connect residents and guests to local food growers and producers with their fresh organic menu. Enjoy the taste and experience of their food made daily from scratch,” the Van Hoevenberg website says. Food and beverages will also be offered in Josie’s Cabin during holidays, weekends and special events.

Go to www.whiteface.com/facilities/mt-van-hoevenberg for more information.

With more than 25 miles of trails for cross-country skiing and snowshoeing, the VIC is poised to have a great season.

Ralph Hartmann said that all of the trails are now open.

“We did grooming yesterday. We have grooming for skate skiing, regular cross-country and snowshoe trails,” he said.

The VIC does charge a fee for use of the trails in the winter, with a day pass for adults running $12. There are also snowshoe and ski rentals available.

“Trails are monitored by a trained volunteer first-aid ski patrol and a courtesy patrol to assist people with directions,” according to the VIC website. “In general, trails are skied in a clockwise direction. Access to all trails will be through the VIC building, where food, hot and cold drinks, local art and last-minute essential supplies are available.”

Some of the trails are also marked for skijoring, or dog-drawn skiing. Leashed dogs are welcome on snowshoe trails as well.

Go to www.adirondackvic.org for more information.