A pair of workers from Harlow Excavating and Contracting work on the caissons for the new Toboggan Chute on the shore of Mirror Lake Wednesday afternoon. The North Elba Town Council said at Tuesday’s meeting that they anticipate the chute to be ready to open by late January. (Enterprise photo — Antonio Olivero)

Plans for the new Lake Placid Toboggan Chute hang on the wall of the Jeffords Steel workshop in Plattsburgh. (Enterprise photo — Andy Flynn)

A New York State Police helicopter, piloted by Tech. Lt. Peter Mclain and co-piloted by Tech. Sgt. Brian Rumrill, prepares tanger Ian Kerr to to hoist up one of the lost hikers Tuesday. (Photo provided by the state Department of Environmental Conservation) 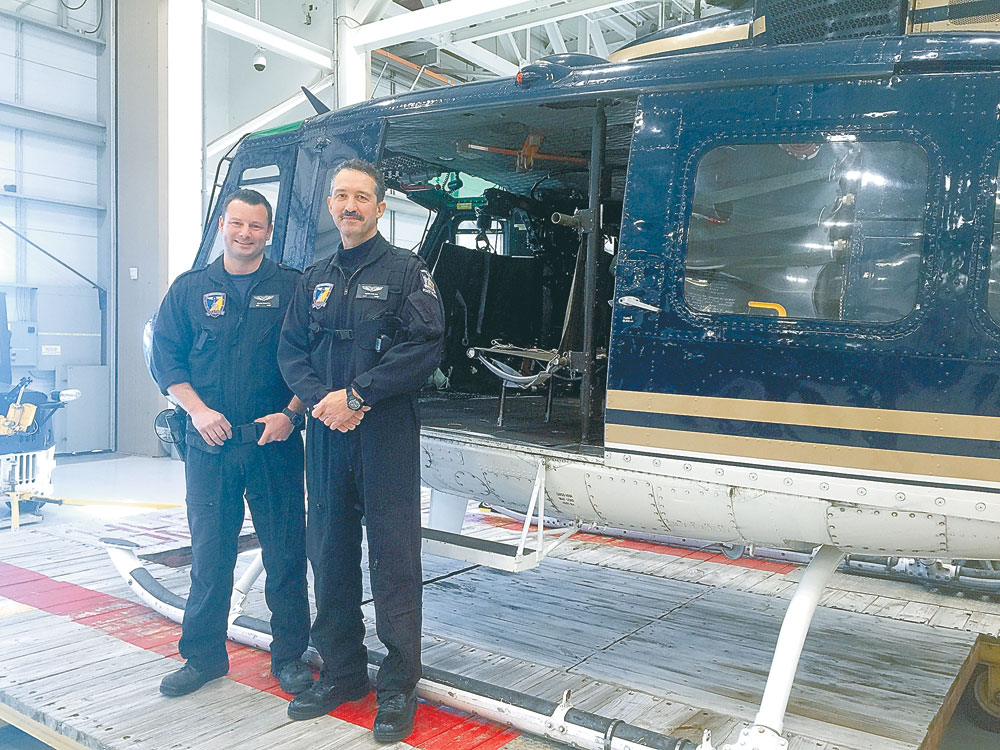 “It was a roller-coaster ride from beginning to end.”

That’s how state police helicopter pilot Peter Mclain describes the effort Tuesday to rescue a pair of missing hikers from the wintry and wind-beaten slopes of the state’s second highest peak.

“It was hairy and dicey, absolutely,” he said. “If I never do another dramatic rescue in my life, I’m good. One and done. That was quite the drama.” 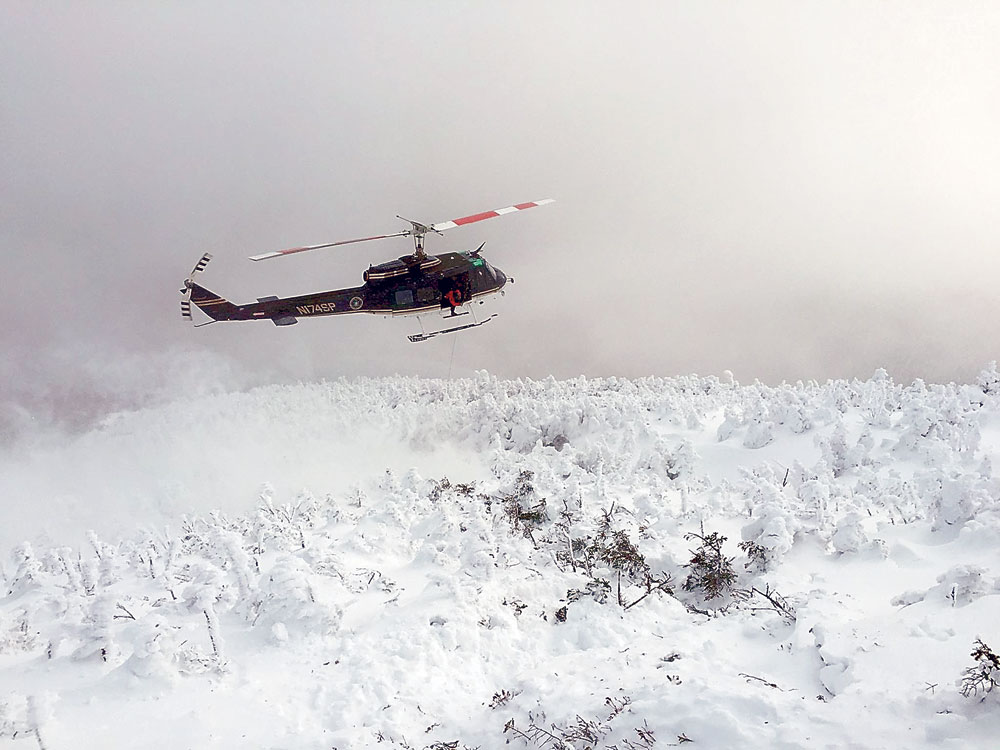 A New York State Police helicopter, piloted by Tech. Lt. Peter Mclain and co-piloted by Tech. Sgt. Brian Rumrill, prepares tanger Ian Kerr to to hoist up one of the lost hikers Tuesday. (Photo provided by the state Department of Environmental Conservation)

Tech. Lt. Mclain, a 30-year state police veteran based in Albany, said he got a call Monday evening that state Department of Environmental Conservation Forest Rangers were searching for two hikers who’d gone missing on Algonquin Peak, near Lake Placid. 20-year-old Blake Alois and 19-year-old Madison Popolizio, both of Niskayuna, hadn’t been heard from since noon Sunday.

“They requested one of our Huey helicopters at that time to help them in possibly inserting rangers and either a recovery or a rescue,” Mclain said. “We were hoping for the rescue part of it.”

The following morning, Mclain and his co-pilot, Tech. Sgt. Brian Rumrill, an 18-year veteran of the state police, loaded gear and equipment the rangers requested into the Huey and lifted off from Albany. They arrived at the Lake Placid Airport, where they were briefed by the rangers.

“The plan was to insert two rangers at the Lake Colden cabin at the base of Algonquin and to resupply them with food and whatever other supplies they needed, and then from there to go and do the search,” Rumrill said.

After dropping off the rangers at the Lake Colden outpost, Mclain and Rumrill began an aerial search, checking the drainages around Algonquin and the other peaks of the McIntyre Range. Visibility was good, but a low cloud bank — about 1,000 feet below Algonquin’s 5,114-foot summit — kept them from climbing any higher.

“Our initial search, we weren’t pleased with it because we couldn’t get much altitude and see much from where we were,” Mclain said. “There was some snow falling, the wind was starting to pick up, and according to the forecast it was going to get better later on, so we relocated back to Lake Placid.”

Little did they know, however, that their initial search helped rangers find Alois and Popolizio, who had survived two bitter cold nights about 250-feet below Algonquin’s summit. As the helicopter flew below them, the hikers yelled.

“Luckily the rangers were a couple hundred yards above them (and heard them yelling),” Rumrill said. “Right place, right time, basically.”

When they landed at Lake Placid Airport after the initial search, around 10:45 a.m., the flight crew learned the hikers had been found alive. They took on two more crew members — Forest Rangers Ian Kerr and Julie Harjung — and got ready to head back into the mountains to rescue the hikers. However, the weather took a turn for the worse. They waited a half hour before it was clear enough to launch. They knew where to go this time, but that didn’t make it any easier.

“What helped us this time is we had an actual location, a definitive GPS point,” Mclain said. “We kept trying to penetrate into that area that we knew they were at, probably a half dozen times. We were probably 1,000 feet or more below them, but we just couldn’t get that break in the weather.”

Rather than burn more fuel, they set the helicopter down at the Lake Colden outpost and waited for a window in the clouds. Another half hour went by, and they decided to try again.

“We stayed in orbit up there just below the cloud cover in hopes that we would get a small window where we could get in there and hopefully get out,” Mclain said. “Nothing seemed to work, and then one of the rangers on the radio said, ‘We have a small window here.’ The window he was seeing wasn’t as big as we would have liked, but it was enough for us to get in, so we climbed the mountain.”

From his co-pilot seat, Rumrill saw two groups of rescuers: one was at treeline, the other was about 100 yards below them, where Alois and Popolizio were located.

“It took a few seconds before they saw us and started waving,” Rumrill said. “At that point, we decided to go in and make the attempt.”

“It was pretty hairy. It was kind of like our decision point,” Mclain said. “They were waving frantically at us, like a sign of distress. We knew the situation. Visibility was pretty low, even where they were. We knew we had a very small window of opportunity.”

The helicopter moved into a hovering position, roughly 40 feet above the hikers, whom rangers had outfitted with harnesses. Kerr manned the hoist and lowered the cable, which was hooked on to Popolizio’s harness. She was in worse condition, so she was the first to be hoisted into the helicopter.

“As she’s getting in, the weather’s getting worse and worse,” Mclain said. “Basically, as the flying pilot my focus was on holding that position and trying to keep my altitude.”

Rumrill, meanwhile, monitored the hoist and the helicopter’s gauges. He also watched the cloud cover out the left side of the helicopter, which was their escape route down the mountain.

“We’re battling the winds on that side of the mountain, and we were able to get the second subject in there,” Mclain said. “Once he was on board, the door was closed.”

“I didn’t anticipate the overwhelming feeling of gladness when both the missing hikers got on board,” Mclain said. “Once they got on board and we took off and everything was safe — it worked out pretty good for everybody.”

The helicopter’s hoist of Alois was captured in a dramatic 25-second video recorded by volunteer rescuer Colin Loher that the DEC has since released to the public. In total, it took about 90 seconds to get both hikers into the helicopter, 90 seconds that both pilots say they’ll never forget.

“You had to be at your A game, and thank God we were,” Mclain said. “We were definitely super focused on what we were doing.”

“Fortunately it went quickly and smoothly,” Rumrill said. “It’s why you can never train too much. We do a lot of hoist training, and it definitely paid off.”

Harjung tended to Alois and Popolizio as the helicopter headed for Adirondack Medical Center in Saranac Lake.

The flight crew’s work wasn’t done, however. After delivering Alois and Popolizio to waiting medical personnel at the hospital, the helicopter returned to the Lake Placid Airport. That’s when Mclain and Rumrill learned about a pair of rangers still in the woods who needed their help.

Forest Rangers Scott Sabo and Jacob DesLauriers had snowshoed the Indian Pass Trail, west of Algonquin, from Heart Lake to the Scott’s Clearing lean-to on Monday, according to DEC spokesman David Winchell. The next day, they started to hike up the old Cold Brook Pass Trail, which crosses the McIntyre Range, but the trail was closed after Tropical Storm Irene and hasn’t been maintained.

“They were quite a ways from Lake Colden, and I don’t think they could have gotten to it that night,” Rumrill said. “They thanked us. They basically said they were in a tough position and really appreciated us getting them out of there.”

Mclain and Rumrill then flew back to the Lake Placid Airport, refueled and headed back to Albany. Later that day, the DEC released Loher’s video, which has since been viewed and shared thousands of times on YouTube and through links on the DEC, state police and Enterprise Facebook pages.

“We didn’t know about it,” Rumrill said. “We were a little preoccupied to see anybody videoing us. It was good to see what we did, and it will be good for training.”

“It made us proud,” Mclain said. “It made the division of state police proud. We’ve gotten so many emails. That day every trooper stood a little bit taller.”

“The five minutes of fame is nice, but the bottom line is these two kids — I have kids that similar age — were able to go home to their parents. And that, to me, is the most important thing.”