Mayor Clyde Rabideau, right, recognizes village Department of Public Works employee Scott Rohe, left, Tuesday night for building and painting a series of winter-themed cutouts that have been placed in various locations downtown and will be used during Saranac Lake Winter Carnival and the World Snowshoe Championships in February. “We’re very lucky that you so willingly do this, because it adds a lot of flavor,” Rabideau said in presenting Rohe with a plaque. Pictured with their faces in the cutouts here are Trustees Tom Catillaz and Paul Van Cott. (Enterprise photo — Chris Knight) 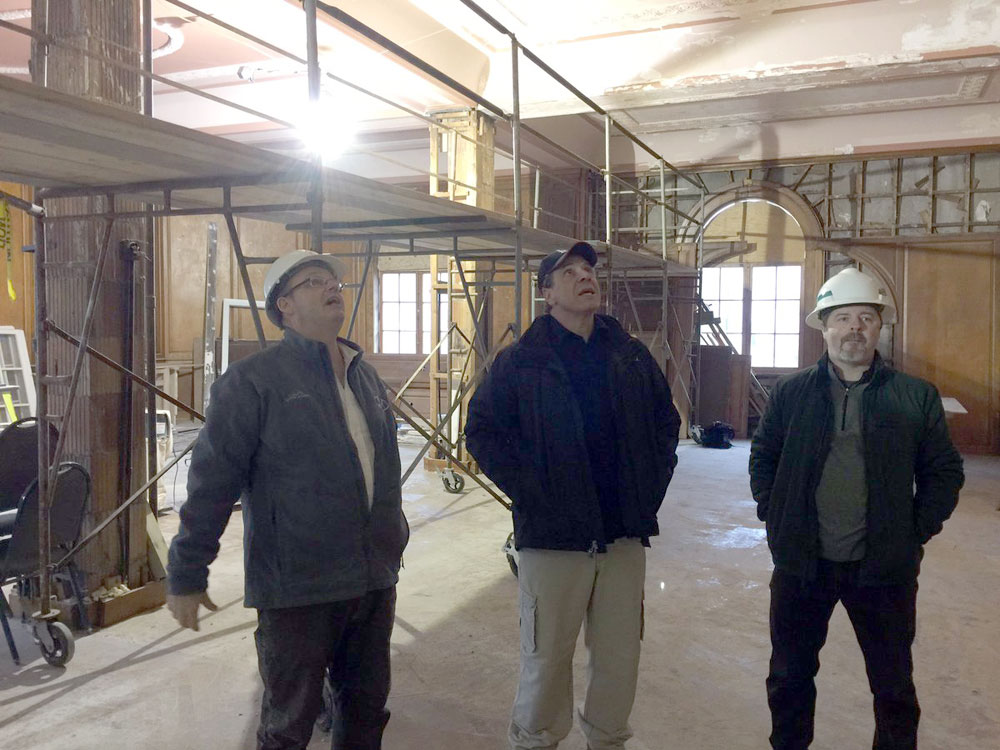 SARANAC LAKE — Gov. Andrew Cuomo toured the still-under-renovation Hotel Saranac for the second time during a stop in the village Tuesday afternoon.

In pictures provided by the governor’s office, Cuomo is seen inside the landmark Main Street hotel with representatives of the companies working to restore it. The three men who led the governor’s tour are hotel owner Fred Roedel III, president of New Hampshire-based ROK Builders, the general contractor on the project; Kevin Knobloch, operations director for subcontractor JNK Home Enterprises of Glens Falls; and Dan Ott, a consultant to ROK Builders.

“He was very excited to do the walk through,” Knobloch said. “It was a wonderful opportunity as a project for a little-known company to walk around with him and explain the history of the hotel and what we’re preserving, like 36,000 linear feet of baseboard molding.”

In one picture Cuomo is talking with JNK employee Kris Kirsch, who’s helping restore the baseboard molding in all of the hotel’s planned 86-guest rooms.

“We’re hand prepping it and scraping it back to its original,” Knobloch said. 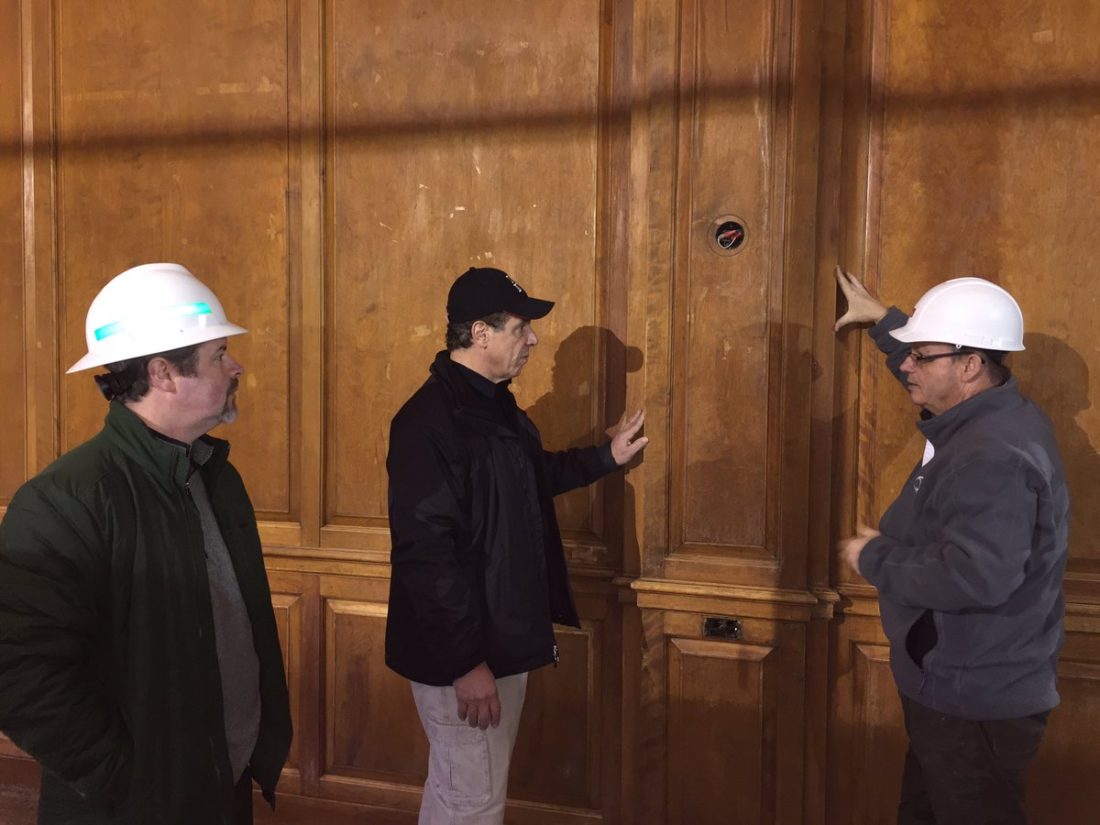 The governor also seemed happy with the number of people the project has put to work, Knobloch said. He said JNK has close to 50 people on the job between its mill site in Glens Falls and the project site in Saranac Lake.

“The governor was pleased to hear that JNK rented six houses locally and employed 20 some people here,” he said. “We visit the restaurants and stores on a daily basis, so he was very pleased to hear all that.”

The caption with the photos notes that the Hotel Saranac restoration is a project “moved forward by the North Country (Regional Economic Development Council).” Three years ago, state officials awarded the project $5 million, but Roedel Companies, the parent company of ROK Builders, doesn’t get the money until the hotel is operating and has reached certain employment thresholds.

“Restoring the iconic Hotel Saranac is essential to future economic growth and tourism in the North Country,” Cuomo said in a statement his staff issued by email. “The state has been an instrumental partner in this project since day one, and today’s tour of construction progress gave me renewed confidence that this architectural gem will continue to serve as a top destination for decades to come.”

Gov. Cuomo has taken an interest in the hotel’s renovation since it was first announced. In mid-August 2013, Cuomo took part in a conference call about Roedel Companies’ proposal with village Mayor Clyde Rabideau and then-Empire State Development President and CEO Ken Adams. Adams then traveled to Saranac Lake the next day to meet with Rabideau and Roedel. 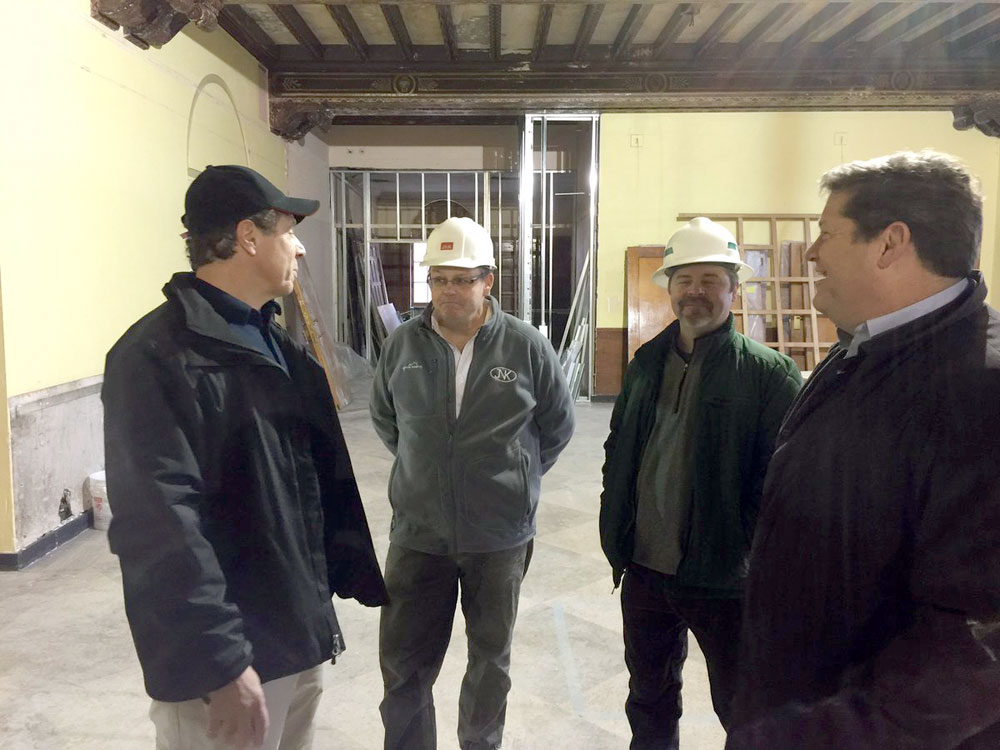 “We’re going to do everything we can to make a new Hotel Saranac a reality,” Cuomo said of the project during a November 2013 press conference in Lake Placid.

Cuomo previously toured the hotel with Roedel and Rabideau in July 2014.

Asked at Tuesday night’s village board meeting about the governor’s most recent visit, Rabideau only said “That’s nice” and declined to elaborate. Roedel Companies is currently suing the village Planning Board over its approval of the proposed Lake Flower Resort and Spa.

Roedel Companies has received a massive loan to finish its $35 million restoration of the hotel, the opening date of which has been pushed back repeatedly due to design and financing delays. The loan documents say the project has to be complete and the hotel reopened and operating by May 1, 2017.

Roedel said in November that he believes May 1 is a “reliable” completion date. He didn’t return a phone message Tuesday. 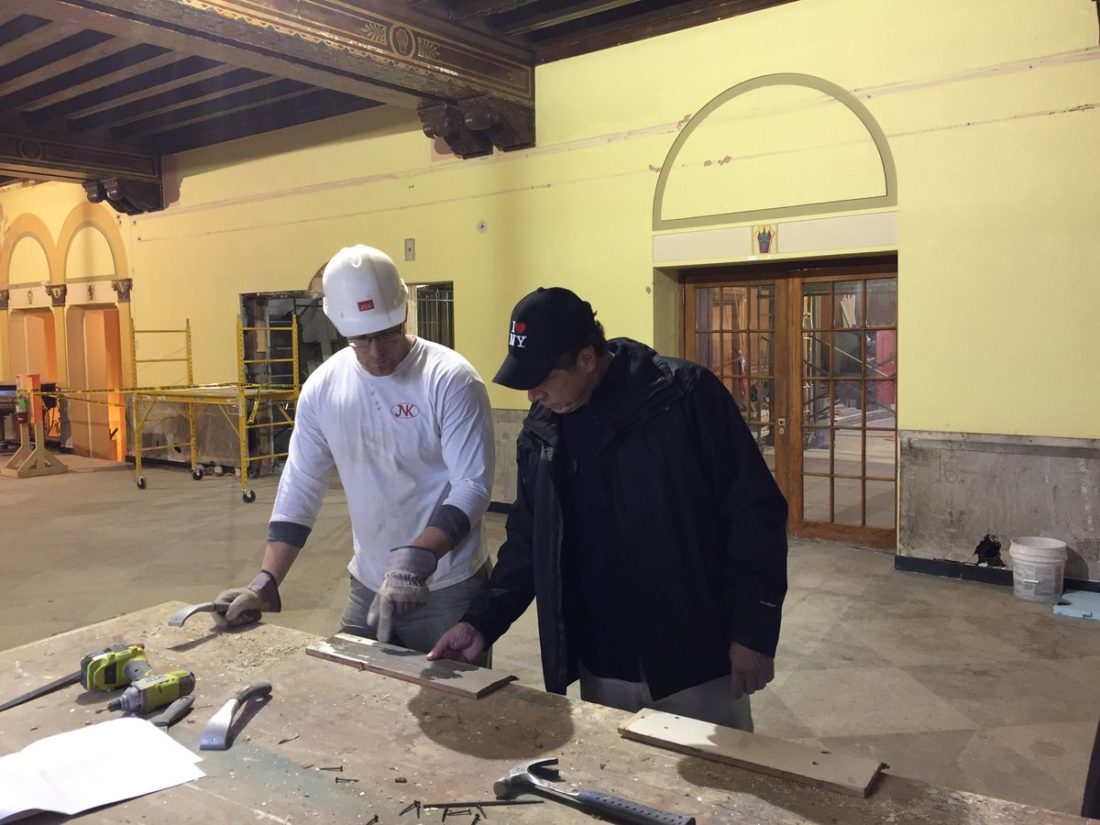 “JNK is moving along at an aggressive pace but not taking anything into jeopardy,” Knobloch said. “If things have to slow down because of design issues or concerns. We’re going to work with the design team to make sure it’s a fabulous hotel right to the end.”

Knobloch gave a summary of the work JNK crews are involved in: “Floors three through six are coming along. The carpet is going in. The tile work in the bathrooms is going to be happening after the New Year. We’ve started restoration of the historic beams in the great hall as well as the mill work in the ballroom and the wonderful plaster ceiling in the ballroom.”

“We have a lot of new framing completed on the second floor for the new bathrooms, as well as the expanded oak room (formerly a private dining area). The first floor is just about all framed out. Mill work is happening in our shop down in Glens Falls. Radiator covers, the bars for the great hall as well as the campfire restaurant — that’s all being produced right now.”

Crews have also started framing the third floor of the former Paul Smith’s College dormitory building on Church Street, which will be turned into larger, suite-style rooms. New windows for that building have been ordered, Knobloch said.

“The project is moving along with great strength,” he said.