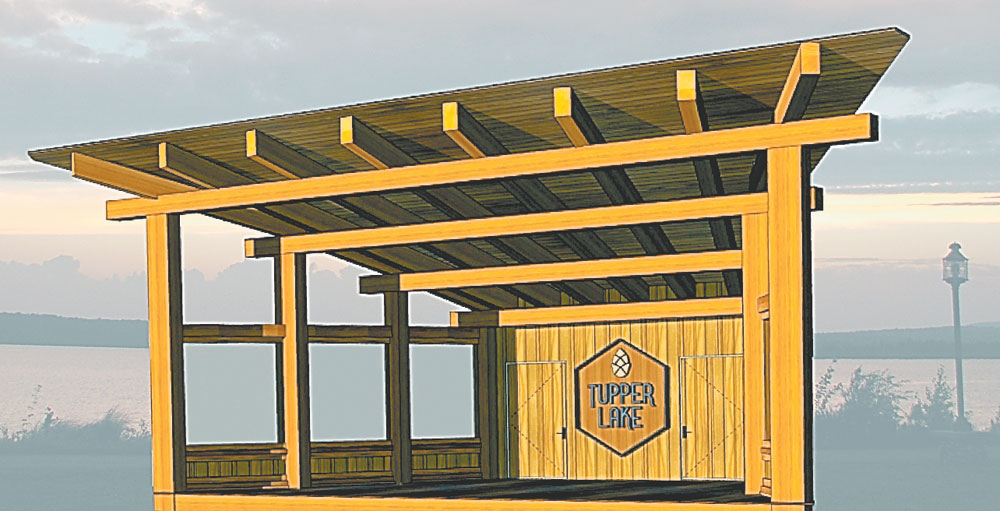 This is the bandshell designed proposed for the shore of Raquette Pond in the Municipal Park in Tupper Lake. (Image provided)

TUPPER LAKE — The village, a charity and local businesses will seek approval of applications when the joint town-village planning board meets at 7 tonight.

The village has submitted a special review use application for Flanders Park for construction of a performance building in an open space and recreation zone.

The village is looking to build a bandshell on the shore of Raquette Pond as part of the Waterfront Park Master Plan, released in 2015 and intended to increase use of the park by locals and visitors.

Organizers received a $150,000 grant from the state Department of State Local Waterfront Revitalization Program and $12,500 from the local Lions Club, but hoped to raise an additional $85,000 from donations in November. The Lions Club also teamed up with the local Veterans of Foreign Wars post to host a picnic in August, which raised approximately $4,000.

As of Dec. 27, the crowdfunding account had raised $19,409 with 41 days left in the campaign. Residents interested in donating can go to https://redbasket.org/1118.

Raquette River Brewing recently raised money for the performance park with its Brewin’ for the Bandshell event, the State Theater hosted the fourth annual ski fundraiser for the park and High Peaks Opera collected donations at the Tri-Lakes “Messiah” Community Sing.

The village anticipates beginning the building process in April or May, and hopes to have the bandshell up and running by Fourth of July weekend.

The board will also consider an amendment to Raquette River Brewing’s original 2012 permit to eliminate its 20-foot-by-30-foot beer tent and construct a 32-foot-by-88-foot pavilion.

The brewery is looking to build the pavilion to extend its season for customers, to promote local musicians and to rent out for events, according to co-owner Joe Hockey. The company will have to push its beer garden out by 25 feet to construct the venue.

Family Champions of the North Country, a charity that distributes essentials to low-income families, has also submitted a special review use application to relocate its operation to 75 Wawbeek Ave. from the former Oval Wood Dish Factory Complex at 100 Demars Blvd.

The charity is looking to move at the request of their landlord Norman Bobrow, who is currently seeking to lease the former OWD complex. Family Champions has been transporting items to the new storefront since November.

The board will also review an application from Ken Stoll for a special review use to relocate the Stoll Mechanical office and company storage to 241 Park St. from 9 Sugar Maple Lane.

Additionally, the board will consider a three-year temporary use permit for the village for a proposed public parking area at 56 Park St.

The Zoning Board of Appeals is also requesting that the Planning Board consider and provide a recommendation on a use variance application submitted by Kevin and Dawn Tarbox to construct an accessory structure.

The board also expects to receive an update on the Adirondack Club and Resort.

The meeting will take place at the town hall at 120 Demars Blvd.