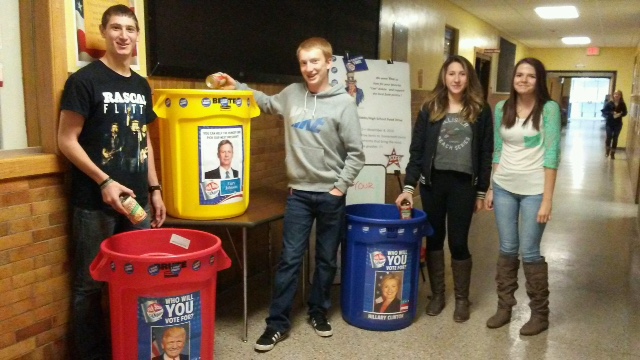 Some local students voted with food, some on a Google forum, others on paper, and their results were all over the place.

In Lake Placid, for example, the middle and high school students share a building but not, apparently, an ideology on how to run the nation. Republican Donald Trump beat Democrat Hillary Clinton at the high school, but Clinton won by more than 2-to-1 at the middle school — and by the same ratio at Lake Placid Elementary School.

Trump also edged Clinton as the winning “can-didate” in a battle of canned goods in the Tupper Lake Central School District. Red, blue and yellow plastic containers were set in the halls of the district’s schools — one each for Trump, Clinton and Libertarian hopeful Gary Johnson — and students were encouraged to bring non-perishable food items to school and place them in the bin of their choice.

“Unlike the national voting process, students and their families are encouraged to vote more than once and bring in as many food items as they like,” district Special Programs Director Matt Southwick said.

In the end, “We took approximately 15 full boxes to the food pantry today, and … I think Donald probably had eight of those 15,” Southwick said. “Hillary had six.” 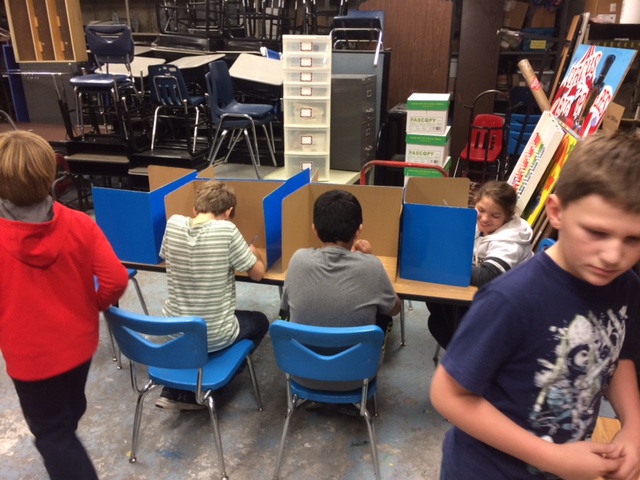 Saranac Lake Middle School did the same thing, but its vote can-vassing went overwhelmingly for Clinton. The Clinton bin ended up with 82 pieces of food, and the Trump bin had just 16.

Trump and Clinton deadlocked in a tie at Long Lake Central School, which has just 61 students in kindergarten through 12th grade. Forty-six of them voted today, with 17 choosing Clinton and 17 Trump. Seven chose Green Party candidate Jill Stein, three chose Johnson, and two incorrectly filled out their ballots.

Long Lake social studies teacher Bob Reynolds took all of his grade 7 to 12 students to watch today’s voting at the town hall across the street from the school. He said his ninth-grade girls were especially glued to election news as they studied the campaign this fall, but he said the most opinionated students were far younger, in first through third grades.

In addition to food voting, Tupper Lake’s L.Q. Quinn Elementary School held a straw poll today among students, faculty and staff. Trump won by a 2-to-1 ratio over Clinton, according to sixth-grade teacher Tracy Klossner.

At Lake Placid Elementary School, kindergarten was the only grade that went for Trump, and that narrowly. Clinton won grades 1 through 5, more than doubling Trump’s count school-wide, according to fifth-grade teacher Jon Fremante. In fifth grade, Johnson won more votes than Trump. 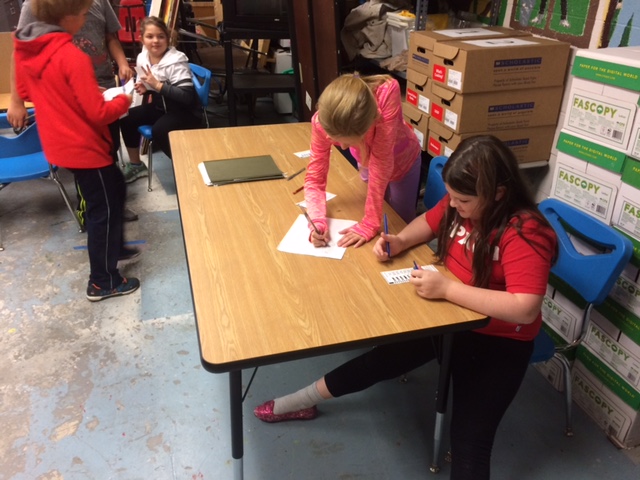 Fremante said his fifth-graders had researched all four candidates for class, and he noticed more of them voted for the Libertarian and Green candidates.

“In fifth grade, where we did the most research, is where you saw the most diversity of of the results,” Fremante said. “I though it was a great showing that with a little research, people can form different opinions.”

Lake Placid Middle-High Schoolers voted online through a Google forum, according to high school Principal Dana Wood. Middle schoolers only voted for president, but high schoolers got the full experience, choosing candidates in all the races their parents would vote in. In addition to Trump, Lake Placid high schoolers picked incumbents Charles Schumer for U.S. Senate, Elise Stefanik for U.S. House of Representatives and Dan Stec for state Assembly, but for state Senate they called a huge upset: Green Party candidate Steve Ruzbacki, who was ticketed for marijuana possession recently in Tupper Lake, got 51.2 percent of their votes compared with 48.8 percent for longtime incumbent Betty Little. The high schoolers also chose Mark Powers over Tim Lawliss for state Supreme Court justice.

Clinton won somewhat narrowly at Saranac Lake High School, getting 120 votes to Trump’s 109 and a combined 50 for Johnson and Stein (no breakdown was available), according to Principal Josh Dann.

The result wasn’t narrow at all at St. Bernard’s, a Catholic elementary school in Saranac Lake. Only third and fourth graders voted, and 25 of them chose Clinton with only three picking Trump and one someone else. 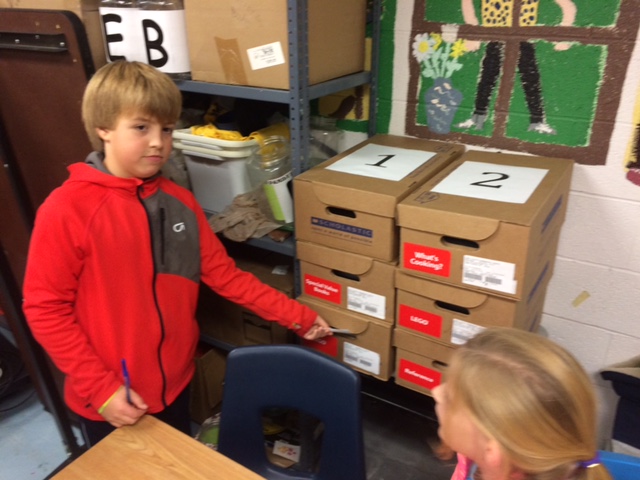 Lake Placid’s Catholic school, St. Agnes, did a different kind of election. Instead of candidates, students voted on which fun thing they would all get to do. Each classroom, including preschool, picked a different kind of event, and the winner, by a single vote was … a glow-in-the-dark pajama dance party, the kindergarteners’ suggestion.

It initially tied a pie-the-teachers-in-the-face party at 28 votes each, but two people who hadn’t voted were found and canvassed, and glow-in-the-dark PJs shone through.

“At least with this one, everyone’s a winner,” St. Agnes Principal Catherine Bemis said. “No one’s going to be unhappy no matter which one wins, because they’re all good.”

Results were not available for elections at elementary schools in the Saranac Lake Central School District and the Northwood private high school in Lake Placid. Keene Central School did not hold a student election.