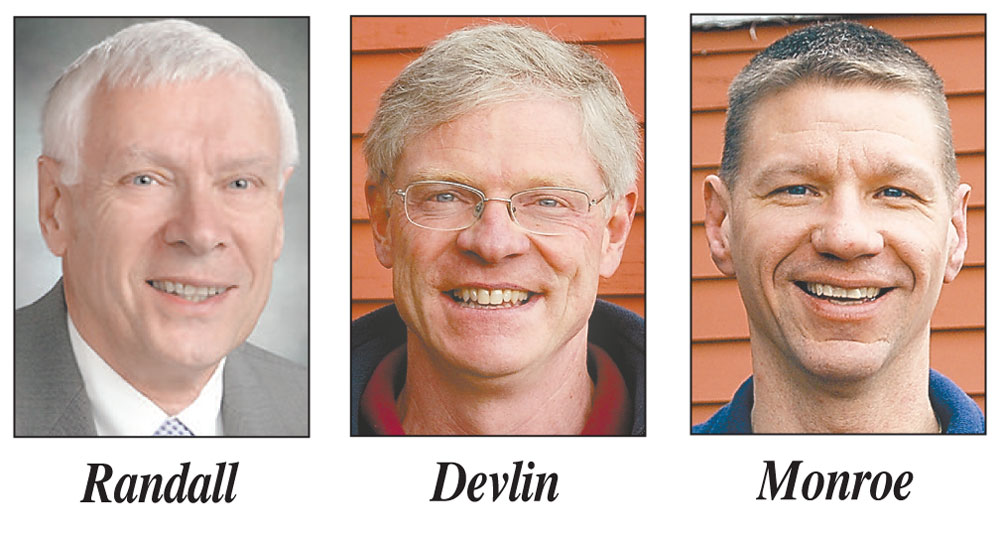 LAKE PLACID — Village Mayor Craig Randall and trustees Art Devlin and Scott Monroe each said Monday they intend to seek their seats on the village board again when their terms expire early next year.

Speaking at Monday’s regularly scheduled board meeting at the village Beach House, the board notified the public that the bi-annual election for the village will be held at the North Elba Town Hall on Tuesday, March 21. Polls will be open between noon and 9 p.m. to all registered voters of the village.

Devlin, who serves as the village’s deputy mayor, and Monroe were last elected to two open seats on the Board of Trustees in March 2013. Devlin will seek his third term after he was the top vote getter in the trustee race in 2013, tallying 283 votes. Monroe will seek his second term after he secured 269 votes in 2013, more than candidate David Jones (230 votes), who ran as a team with Devlin and Randall.

Randall ran unopposed in 2013 and will seek his third term as mayor. As of Tuesday no opposition candidates have formally announced their candidacy for mayor or either of the trustee positions.

“We are moving on a number of projects in the village and it’d be nice to keep the team together until we get through the Main Street issues, which are ahead of us,” Randall said Monday. “I think I speak for all of us when we say we are interested in continuing to serve and specifically for that reason. A lot of the other work, speaking for myself as a mayor — we’ve accomplished in eight years a lot for the village in terms of its organization, stability, management, credit ratings. I think a lot of it has to do with the way this board has conducted its responsibilities, so we’d like to see it stick together.”

Hulshoff circulated a petition to put the decision to ballot after the board voted unanimously on April 4 to dissolve the court and abolish its lone justice position. The completion of the dissolution of the court was set to take effect on the first Monday of April 2017, after the bi-annual election in March. Hulshoff also serves as a North Elba town justice.

Forest rangers with the state Department of Environmental Conservation made two mountain rescues last week in the ...

LAKE PLACID — The state Department of Transportation is planning to overhaul the Sara-Placid section of state ...

Boating while intoxicated could impact driving on roads if legislation reintroduced recently in the state Assembly ...

LAKE PLACID — The Beach House may be getting a new tenant. The Lake Placid Village Board of Trustees on ...

State Assemblyman Dan Stec, R-Queensbury, has sponsored a bill to prevent the contact information for emergency ...