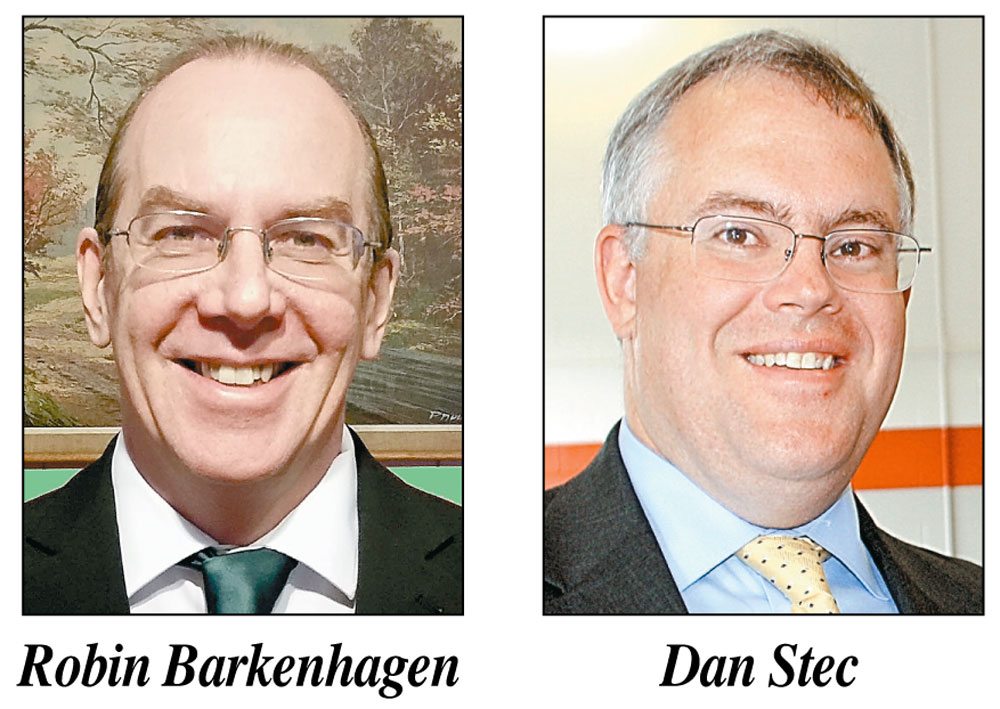 Stec, a Republican from Queensbury, has served for four years in the minority of the state Assembly after he was supervisor of his hometown of Queensbury. Without a challenger from the Democratic party, the 50-year-old Barkenhagen is his sole opponent.

One of three Green Party candidates running for state and federal office here in the North Country, Barkenhagen is running on a platform highlighting his party’s Green New Deal economic and environmental platform, publicly-financed campaigns and the decriminalization of recreational marijuana.

Stec said he believes progress was made in this past year’s state budget with a $166 million increase to combat heroin and other drug addictions. He highlighted changes to insurance laws he hopes will make treatment more available, but Stec added that there aren’t enough treatment beds available to meet the need in the North Country. He said that would be a focus of his next legislative session if elected.

Barkenhagen said he would “decriminalize addiction” and work to place addicts in treatment rather than jails. He said he’d work to expand the Compassionate Care NY medical marijuana program to treat addicts. He cited a Massachusetts-based study for his position and said New York should be conducting similar ones.

Barkenhagen added that more people and officials should have Narcan nasal spray kits to help save lives and there should be more rehab beds and treatment facilities.

From meeting many times with police, providers, addicts and families, Stec said the overwhelming message he’s received is that marijuana legalization is not a good idea. He also said he’s concerned with safety on the roads if the drug is legalized recreationally.

“At the very least we should observe the experiences of the few states that have legalized it and learn from their experience and mistakes before rolling the dice here in New York,” Stec said.

Stec called small businesses “the backbone of our economy,” and said they struggle in the state due to high taxes and heavy regulations.

“I have and intend to continue to focus on lowering the heavy cost of doing business in the state,” he said. “This will encourage more job creation, more business investment and increase wages.”

Barkenhagen said he supports a “trickle-up theory,” where tax incentives would be offered to small businesses that pay their employees at least $15 an hour.

“If workers are making more money, then they are spending more money,” he said. “Businesses would have more cash flow and collect more sales tax, thus stimulating the economy.”

Barkenhagen said more transparency is needed in Albany. He said he supports term limits though he does not support limits on outside income. Barkenhagen said publicly funded elections would also help. He cited Maine’s Clean Election Act as a model.

Stec disagrees and said New York City is an example of how public financing of elections hasn’t eliminated corruption problems. He added that he wasn’t convinced that publicly financed campaigns don’t potentially cost taxpayers in the end and said the constituents he’s heard from oppose the idea.

“(They) believe that this is money that would better be spent fixing our infrastructure,” he said.

Stec described himself as a “champion” of ethics reform since he was first elected and said his signature issue has been “leading the charge” for the first passage of a constitutional amendment to strip corrupt officials of their public pensions. He and Republican colleagues have also proposed a package of rule changes that would limit term lengths for legislative leaders. Stec also supports limits on outside income and more disclosure of legislators’ outside income.

Stec voted in favor of the $500 million in state money that, along with matching private funding, would be used to update the entire state’s broadband infrastructure. Stec said better broadband and cell phone reception improves economic viability, public safety, property values and educational opportunities in the North Country.

“I continue to work with service providers, local governments in my district and the state broadband program office to make sure we are making progress as quickly as we can,” he said.

Barkenhagen dubbed broadband a “21st century utility” and said its necessary for all New Yorkers. He said grants and loans for rural areas is a start, but he cautioned that spending needs to be done carefully without waste.

Barkenhagen said the two most important things he’d push for would be ethics and marijuana reform. He said he would like to serve on the Environmental Conservation and Energy and Tourism committees, among others.

Stec plans to pursue the second passage of the two Constitutional Amendments he said he played a key part in securing first passage for this year, the ethics and pension forfeiture for corrupt officials amendment and the Adirondack Land Bank amendment.

He said he wants to remain on the five committees he currently serves on, calling them important to the district. Stec, an Adirondack 46er, is the ranking minority member on the Assembly’s Environmental Committee. He said it puts him in a key position to advocate for environmental issues that are important in the Adirondacks. He also serves on the on the Tourism, Local Government, Social Services and Banks committees.

Stec dubbed Obamacare “a disaster as many predicted it would be,” and said going to a single-payer program would make the situation worse. Stec said he believes competition among insurance companies, Tort reform and reducing barriers interstate are “worth exploring.”

“Consider the difficulties the federal government has had running the Veterans Administration,” Stec said. “Even liberal Vermont, which started down the path towards single-payer, (saw) the financial catastrophe it would bring and they backed off single payer.”

Barkenhagen is in favor of a single-payer system and said he would fully support legislation similar to Manhattan Assemblyman Richard Gottfried’s bill to create a universal publicly funded single-payer health coverage plan.

Barkenhagen supports his party’s “Green New Deal” economic and environmental platform of transitioning to 100 percent renewable energy by 2030. He also said he wants to permanently ban hydrofracking, the use of fracked oil and the passage and storage of “oil trains” in the state.

Stec said he supports an “all of the above” approach to energy and conservation efforts that includes a mix of traditional and renewable energy sources.

“We need to factor in environmental impacts as well as the cost feasibility and sustainability of the various sources we have available,” he said.