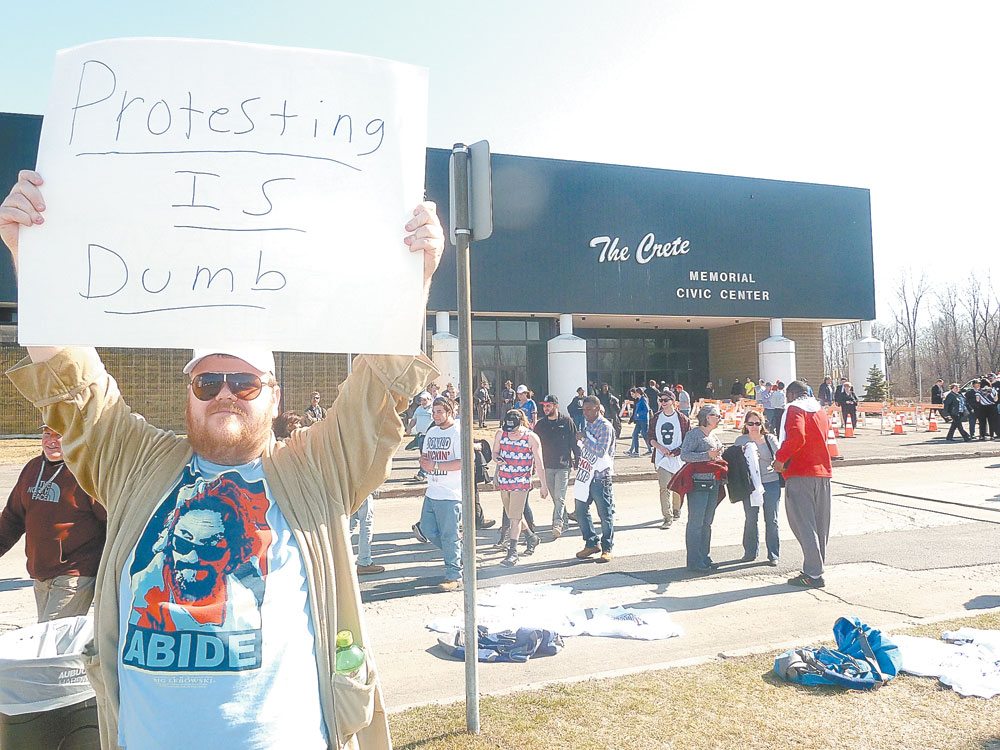 Donnie Rearden of Dannemora wears his “The Dude” T-shirt at a Donald Trump rally April 19 at the Crete Civic Center in Plattsburgh. Not a fan of either presidential candidate, Rearden says he’ll vote for Libertarian Gary Johnson Tuesday. (Enterprise photo — Antonio Olivero)

Two hundred days ago, Donnie Rearden of Dannemora was “The Dude” at “The Donald’s” rally at the Crete Civic Center in Plattsburgh.

Four days before Donald Trump would go on to win the North Country and the state of New York in the April 19 Republican primary on his way to the nomination, Rearden stood outside the Civic Center and wore an Obama-style T-shirt showing the “Big Lebowski” character “The Dude” with the word “Abide.”

After Trump’s 31-minute speech kindled excitement of the 3,000 who stood atop the center’s artificial turf, a quiet Rearden and his sign greeted many as they returned to their cars. Wearing a bathrobe and oversized sunglasses, the South Carolina native quietly held up a sign, one side of which read “peaceful spectator,” and “Protesting is dumb” on the other.

On that Friday, Rearden may have been a peaceful protestor at the biggest election event in the North Country in decades. But come Tuesday, he will vote. And as one of millions of swing voters across the country not enamored with either Trump or Hillary Clinton, and exhausted with the histrionics of this election cycle, the ultimate power lies in the hands of Americans like him.

President Trump? President Clinton? We decide, but Rearden won’t cast his ballot for either.

Instead, the self-described Libertarian will vote for his chosen party’s candidate, Gary Johnson. Rearden’s rationale is simple: He’s curious, he says, as to why people are so surprised that Trump, who he views as a “sleazy” businessman, is acting like a sleazy businessman. As for the Democratic Clinton, Rearden  views her as “corrupt for many years.”

So his vote will go to Johnson. And in a dog-eat-dog election where both Democrats and Republicans want a guy like Rearden’s vote as badly as ever, he doesn’t want to hear it from either side. He doesn’t think he’s the only one, either.

“I hear so many people around here still say they are writing in Sanders,” Rearden said Sunday, “even though he has publicly pleaded for them to vote for Clinton. I believe he’s just as money hungry and corrupt as the rest of them.

“And I don’t care if people say I’m wasting my vote on Johnson,” he continued. “Is he perfect? No. But I feel he’s a better candidate than the others. At least I can say I voted with a clean conscience and can look at myself in the mirror, knowing that I tried.”

Garet Bleir is another voter who tried. Bleir is a Syracuse University student who, over 23 days in May and June, finished the final 30 of his Adirondack 46 High Peaks with a life-sized cardboard cutout of Bernie Sanders.

Bleir is an aspiring journalist and photographer, who stumped for Sanders for months on and around the Syracuse campus. He was getting ushered away from protesting a Trump campaign rally in Syracuse months before his Adirondack adventure.

Two days away from a kind of D-Day for Bleir and other staunch Sanders supporters, his Facebook profile photo said it all: Dressed cleanly in khakis and a button down shirt, he stood between a Trump-Pence “Make America Great Again” lawn sign and a “Hillary for President 2016” lawn sign.

In the middle, Bleir carved a hole in a second Trump-Pence campaign sign, his mouth yelling from it as he wore it over his head.

Despite his lawn sign shenanigans, Bleir was still somewhat uncertain where all of his love for Sanders would go: into a vote for the candidate he and others dreaded so much all along, Clinton, or a candidate with seemingly no shot to win, the Green Party’s Jill Stein.

With the reality that is the Electoral College and being a voter in New York, it’s come down to a numbers game for Bleir, like so many others.

“Seeing as New York gives all its Electoral College votes to the winner of the state, regardless of whether they win by 1 percent or 99 percent, if Clinton’s current lead does not change. I may vote Jill Stein in order to help give aid to the 5 percent nationwide vote the Green Party needs to gain access to millions of dollars in additional funding,” he said. “Thus, beginning the transition from bipartisan politics to a multiparty system.”

But what if Clinton’s lead wanes?

“Then I will vote for Hillary,” Bleir added, “but under the Working Families Party. The WFP, under New York law is allowed to cross-endorse candidates … The WFP is what Bernie has defined as the closest party to his version of democratic socialism, and so if we vote for Hillary under that party, it would send a message to the nation that we want a Clinton presidency over a Trump presidency, but one that also is in support of the progressive agenda.”

With fewer than 48 hours to go before President Clinton or President Trump, the energy hasn’t let up, but the exhaustion hasn’t either for many.

One of those people is Tom Murphy, a former Saranac Lake resident who moved to Colorado smack dab in the middle of the election excitement this summer. Nineteen hundred miles away in a town called Pueblo West, Murphy says the same disenchantment many voters have in the Tri-Lakes area is present in a different mountain region, and he is one of them. So instead of voting for the person behind the party, Murphy said many in Colorado say they will be voting issue first, candidate second.

“Most people I’ve talked to say they’ll vote Democrat over Republican just to keep Trump out of office,” he said. “And I think most young people in this part of Colorado will make marijuana a part of their decision in voting progressive over conservative. Not just the recreational use, but from the benefits from the extra tax dollars on the infrastructure and schools.”

Of all of this excitement, and at times vitriol heading into Tuesday, few know it better than the bartenders who have had to serve drinks to thirsty voters during this fall’s presidential campaigns.

Back in Lake Placid, Tim Robinson decided to tune the televisions at Top of the Park from the obligatory Monday Night Football game to the first presidential debate on Sept. 26. Without a television of his own at home, this was Robinson’s way to watch what 84 million Americans viewed.

He said the general consensus in the bar was that both candidates were bad.

“(The conversation centered around) just about which one is going to screw us less,” Robinson said.

Like any good bartender, Robinson knows there are two things you don’t discuss while serving drinks: religion and politics. Still, Sept. 26’s debate and the two that followed were must see-TV.

“It was my opportunity to see it,” he said. “We had a full bar for it. Everyone was engaged. But there wasn’t too much banter back and forth.”

Then the inevitable happened. A supporter of one of the candidates got to talking at the TV, then debating with fellow bar patrons, then pushing and shoving.

Though this fall’s presidential election cycle may not have been fun to watch for many, the Chicago Cubs run to their first World Series in 108 years certainly was. So Robinson defused the situation the only way he, and many Americans, could have during the autumn of 2016.

“How ’bout those Cubbies?” he asked.