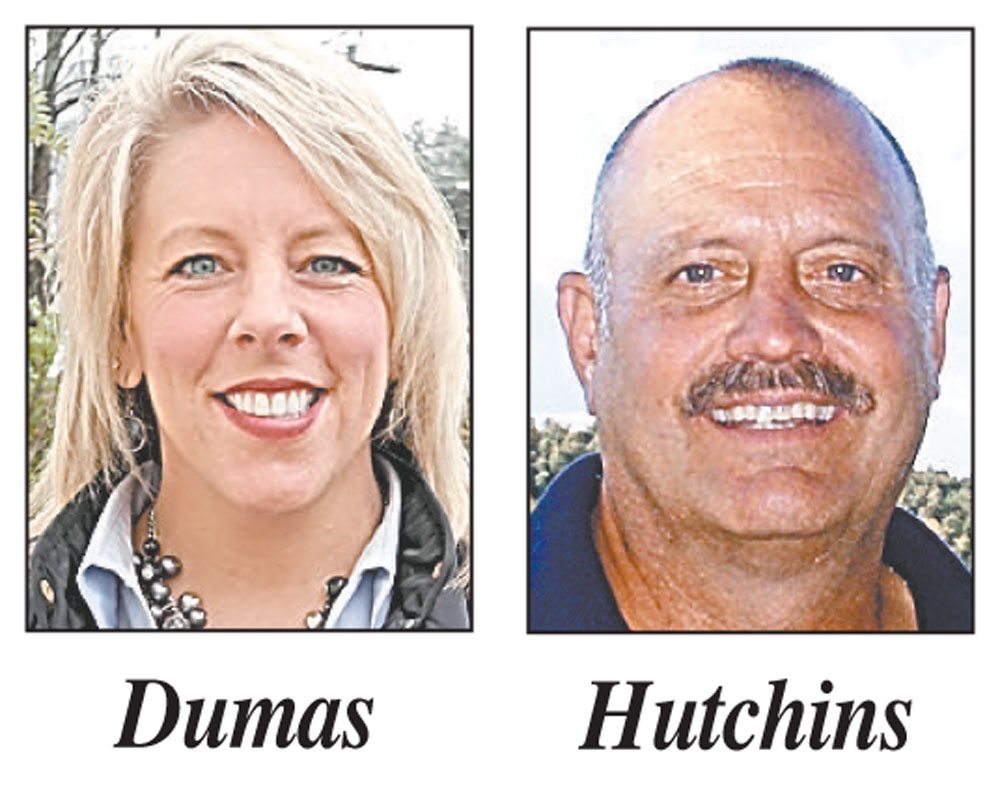 Voters in the town of Brighton will choose between a pair of Malone-area residents to represent them on Franklin County’s Board of Legislators.

Republican Andrea Dumas and Democrat Jon Hutchins are looking to replace Gordon Crossman in District 3, which includes the towns of Brighton, Duane, Bangor and half of the town of Malone. Crossman, a Democrat, is retiring for health reasons and to spend more time with his family.

The candidates are presented here in alphabetical order by last name.

Dumas, 45, is lifelong resident of Malone. She works in the cyber-security field for Twinstate Technologies. Before that she worked on wind farm projects in the North Country for American Wind Capital and Noble Environmental Power.

A current trustee on the Malone village board, Dumas has also been involved in community organizations and served on boards in the Malone area including the Malone Figure Skating Club, the Alice Hyde Medical Center Auxiliary, the Malone Chamber of Commerce and the Franklin County Industrial Development Agency.

“I bring positive energy, and I’m looking to support everybody in the county,” Dumas said. “Not one district, not one town, not one village, not one party line — I’m here for everybody. I want us to have a team that works very well together with all levels of government.”

If she’s elected, Dumas said dealing with the county budget and undoing the county’s “fiscally stressed” label will be among the biggest priorities.

“Budgets are very difficult,” she said. “We have these mandates on health care and retirement, and then we have to take care of the roads and the infrastructure. Going in and looking at the budgets and seeing where we can make changes is going to be key. That’s where I think we have to have a fresh set of eyes and having a team that can look at the changes together.”

Dumas said she’s been visiting the town of Brighton and attending town board meetings. The problems and issues she’s heard about from local residents and town officials are the same across the county, she said.

Dumas said she also wants to work with town officials, Sen. Betty Little and others to redevelop the former Camp Gabriels prison. A plan to turn it into a summer camp for Orthodox Jewish boys from New York City has been tied up in Adirondack Forest Preserve issues.

“We’ve got to continue to keep that on the forefront instead of having an abandoned property,” Dumas said.

“We need to work together and find ways to continue to grow their programs,” she said.

Hutchins said his familiarity with county government is one of his biggest assets and gives him an advantage over his opponent.

“I have the county experience, working with the legislators for six years,” he said. “I’ve been on a tight budget with the county, and we’ve accomplished more with less. I’m probably more familiar with the county budget than anybody.”

Asked why he’s running for office, Hutchins said he’s tired of legislators saying no to various projects and initiatives.

“The first thing that comes out of the existing legislators’ mouths, a lot of them, is no, no,” he said. “I say, we’ve got to find a way. There’s a lot of grant money out there. Essex and St. Lawrence counties, they’re distressed, too, but they seem to borrow bond money for roads.

“People don’t think we have enough money, but there’s oodles of grant money just floating out there. We’ve just got to get on the right track to get that funding.”

Hutchins said he wants to do more to promote tourism in the county, whether it’s at the Akwesasne Mohawk Casino in Hogansburg or paddling in the St. Regis Canoe Area, and support both colleges. He said he wants to expand the county’s public transportation system in the southern end of the county. He also suggested the county look into taking over the Adirondack Regional Airport in Lake Clear, now run by the town of Harrietstown.

“We have an excellent airport in Harrietstown, but I think we could grow it more if it was a county-run airport,” he said. “I’d like to have the county research that. If it was county run, I think we’d have availability for more (grant) funding for it and grow tourism in the county.”

Hutchins said he isn’t up to speed on the status of the former Camp Gabriels.

He talked at length about the many projects he’s done across the county in his 25 years of experience running his own contracting business, JT Erectors. He’s also been involved in labor unions, is president of the East Pond Hunting Club and is a member of the Elks Lodge and the Sons of the American Legion.

“I did a lot in the communities, and I’ve worked with many of the town supervisors and highway superintendents over the years,” Hutchins said. “I don’t care if you’re a Democrat or a Republican; I’m here to support you.”