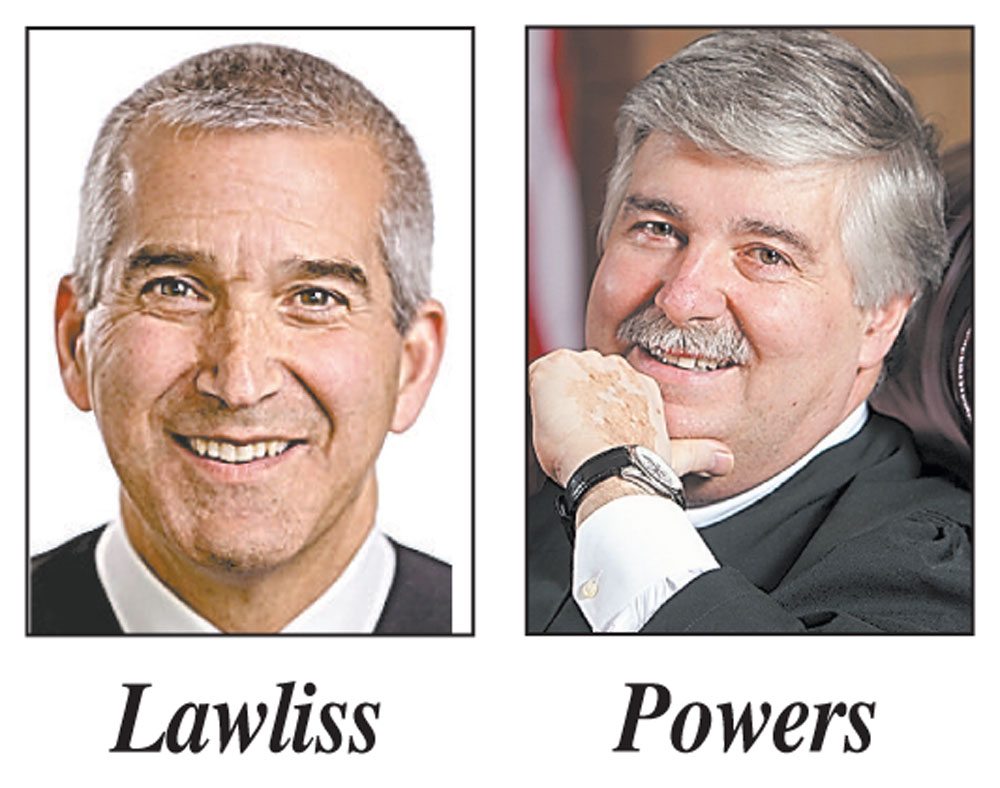 Within the small world that is the New York state court system, 4th Judicial District candidates Tim Lawliss of Peru and Mark Powers of Schenectady have each run positive campaigns with only nice things to say about each other.

Th district covers 11 counties, including Clinton, Franklin and Essex and an estimated 840,000 people.

“I know my opponent. He’s my colleague. I certainly respect him, and on paper I think we both present ourselves very much in the same light,” Powers said Thursday. “I’d like to say we’d both be the first to congratulate each other no matter who wins.”

Lawliss won the nomination of the Republican party and Powers the nomination of the Democrat and Conservative parties. This Supreme Court seat, which hears a variety of civil and criminal cases, was vacated when Justice John Lahtinen, who served on the Appellate Division, retired. Supreme Court terms are 14 years or until the judge reaches the age of 70. Some justices are also appointed to the court’s Appellate Division, hearing appeals from Supreme Court and county criminal courts.

Lawliss said this week that he feels the most important element of the race is the North Country factor. He stressed how the stepping down of Lahtinen means Clinton County will lose a justice as Lahtinen is from Plattsburgh. Lawliss said though Schenectady County has a larger population than Clinton County, he feels it’s important for the North County to retain a sitting justice and mentioned how Schenectady County already has several justices.

“Certainly Schenectady is bigger than Clinton, but it doesn’t have five times the population,” Lawliss said. “From just a good government point of view, I would look logically at it and say to have six Supreme Court justices in Schenectady and none in Plattsburgh — nobody can remember a time when Clinton County didn’t have a sitting justice.

“In those five northern counties there are only two sitting supreme court justices, one in Tupper Lake and one in St. Lawrence county,” he added.

Lawliss said he was born and raised in the North Country, and he has been married to his wife Kathy for 25 years. He is an Adirondack 46er, his favorite mountain being Gothics in Keene, and he has competed in 28 marathons and two Ironman Lake Placid triathlons. He says he has longstanding ties to Essex County, both in the court room and having worked the 1980 Winter Olympics. He said he also coached both of his daughters’ sports teams when they were children.

He stressed he has a resume that has prepared him for this Supreme Court position, which includes his role as president of the New York State Family Court Judges Association.

Lawliss first took the bench as Family Court judge in 1999, and helped design the county’s family treatment court. He now presides over all the treatment courts in the county, including the Integrated Domestic Violence Court. He’s been a county court judge throughout his tenure and an acting Supreme Court justice since 2003. He graduated from Suffolk University Law School in 1987.

“I have just a fantastic resume that prepared me for this job,” he said.

Though from Schenectady, Powers said he also has ties to the North Country and is rated highly qualified by the Independent Judicial Election Qualification Commission. Lawliss is rated as qualified.

Powers first presided as Family Court judge from Schenectady County in 2002. He became an acting Supreme Court justice in 2004. He served four years as the designated Integrated Domestic Violence Court judge in Schenectady County and two in Essex County, during which time he said his affection for the North Country grew. Powers graduated from Western New England School of Law in 1985, and said he’s also presided at special terms in Franklin County and Washington County.

Powers is a deacon at his church, the First Presbyterian Church in Schenectady, and has a son who is a staff sergeant in the Marine Corps and a daughter who is a case worker with the state Department of Social Services. He has been married to his wife Marcia for 37 years. He said he was on the board of directors for several years of the Twin Rivers Boy Scout Council, and as an Eagle Scout, himself, he’s enjoyed hiking in the Keene area with his troops.