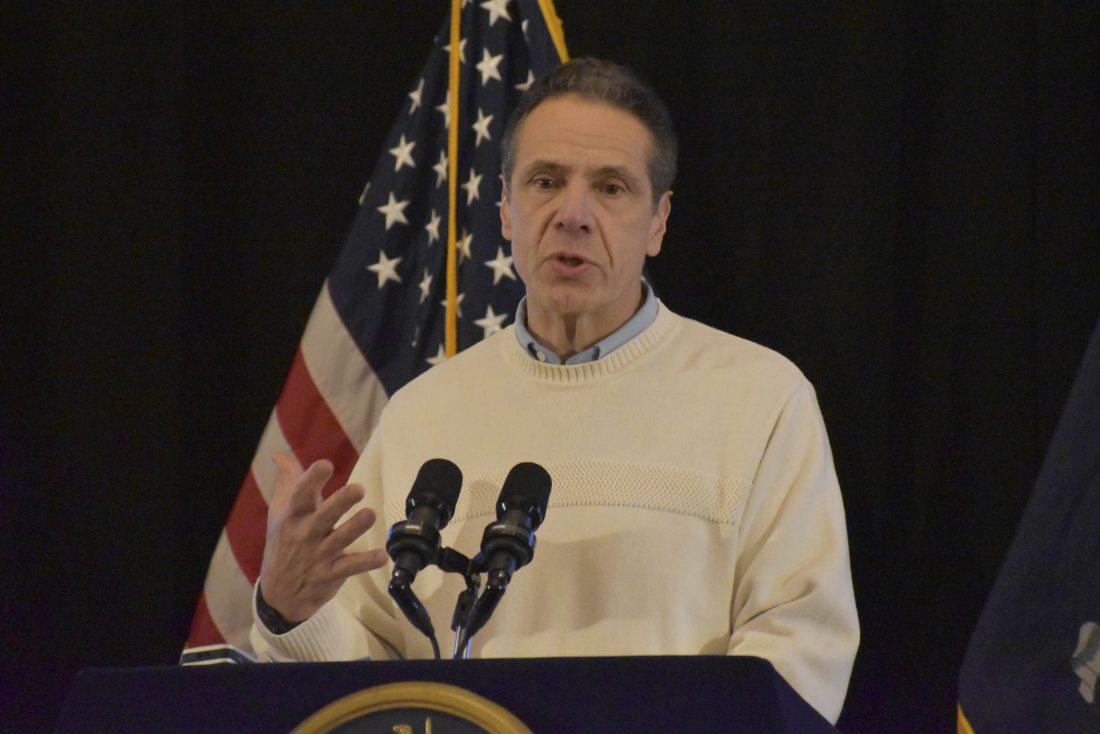 NEW YORK — Gov. Andrew Cuomo sounded his most dire warning yet about the coronavirus pandemic Tuesday, saying the infection rate in New York is accelerating and the state could be as close as two weeks away from a crisis that sees 40,000 people in intensive care.

Such a surge would overwhelm hospitals, which now have just 3,000 intensive care unit beds statewide.

The rate of new infections, Cuomo said, is doubling about every three days. While officials once projected the peak in New York would come in early May, they now say it could come in two to three weeks.

“We are not slowing it. And it is accelerating on its own,” he said during a briefing at the Jacob K. Javits Convention Center. “One of the forecasters said to me we were looking at a freight train coming across the country. We’re now looking at a bullet train.”

New York officials have been racing to essentially double their hospital capacity to up to 110,000 beds. Cuomo now said there could be a peak need of 140,000 beds.

There were more than 25,000 positive cases in New York state and at least 210 deaths, according to state figures. Most of the cases and deaths have been in New York City, an emerging worldwide hotspot in the outbreak.

White House officials urged people who have left New York City amid the outbreak to self-quarantine for 14 days after their departure because of the widespread rate of infection.

New York officials are planning to add at least 1,000 temporary hospital beds at the Javits Center for non-COVID-19 patients and thousands of beds elsewhere. But Cuomo said “they’re nowhere near” the number that will be needed. The state also faces shortages of ventilators and protective equipment for medical workers.

New York has 7,000 ventilators, the breathing machines that can keep COVID-19 patients alive, and Cuomo says the city needs 20,000 of them in a matter of weeks.

New York City Mayor Bill de Blasio said 4,000 ventilators were coming from the federal government in the next two days, with half going to the city.

But Cuomo said many more were needed, and he called Tuesday for a national push to send all available ventilators to New York immediately.

After the expected surge of patients in the state passes, those ventilators could then be redeployed to the next hot spot.

“I will take personal responsibility for transporting the 20,000 ventilators anywhere in this country that they want, once we are passed our apex,” Cuomo said. “But don’t leave them sitting in a stockpile.”

Peter Pitts, a former associate commissioner at the Food and Drug Administration and president of the New York-based Center for Medicine in the Public Interest, said that ventilators — about the size of two old VCR machines — are certainly portable. But he said there would have to be regional or national coordination of such a surge.

Dr. Nicholas Hill, chief of pulmonary and critical care at Tufts University School of Medicine in Boston, said he was skeptical anyone with ventilators would be willing to give them up.

Asked if Tufts would temporarily lend out ventilators to New York, he responded succinctly, “Hell, no.”

“If we knew with certainty we could get them back when a spike was coming, I might be willing to talk more,” he said. “But no one is going to be able to guarantee that.”

He said that with what’s going on in New York, “we have to think that we’re going to be next, and we don’t want to be caught with our pants down.”

New York will reduce subway service beginning this week in the wake of an 87% drop in ridership, Metropolitan Transportation Association officials said Tuesday. The changes will begin to go into effect Wednesday..

Subway service will be reduced by about 25%, chief operating officer Mario Peloquin said. Morning and evening peak service would be preserved. Service also will be reduced on the MTA’s bus lines, the Long Island Rail Road and MetroNorth Railroad.

Ridership has fallen more than 70% on all of the MTA’s services, chairman Pat Foye said. A shortage of available employees has caused hundreds of subways to be delayed.

The death toll from COVID-19 has left people in mourning around the state.

In Brooklyn, Dez-Ann Romain, 36, principal of a school for students who had struggled in traditional high schools, was remembered as a dedicated educator who gave her all to her students and staff.

In the Albany area, 92-year-old technology pioneer Walter Robb died just days after being admitted to the hospital with a severe cough and being put on a respirator. Robb had spent years working at General Electric Co., pushing advancements in imaging equipment used in health care.

Alan Finder, a former reporter at The New York Times, was remembered for his decency and kindness. Current Times reporter Kevin Sack said on social media that Finder was a terrific reporter, a calming presence and one of the “menschiest” guys around.

The losses included those who had made New York City their artistic home. Renowned American playwright Terrence McNally, whose work was a mainstay of New York theater, died at 81 in a Sarasota, Florida, hospital.

Sini has been at home under self-quarantine for about a week and received his test results late Monday night, chief of staff Justin Meyers told the newspaper. The prosecutor has no symptoms and has been working from home.

Debate heats up over using anti-malaria drug for COVID-19

WASHINGTON — President Donald Trump and members of his administration are growing emphatic in promoting an ...

The new coronavirus made Dr. Jag Singh a patient at his own hospital. His alarm grew as he saw an X-ray of his ...