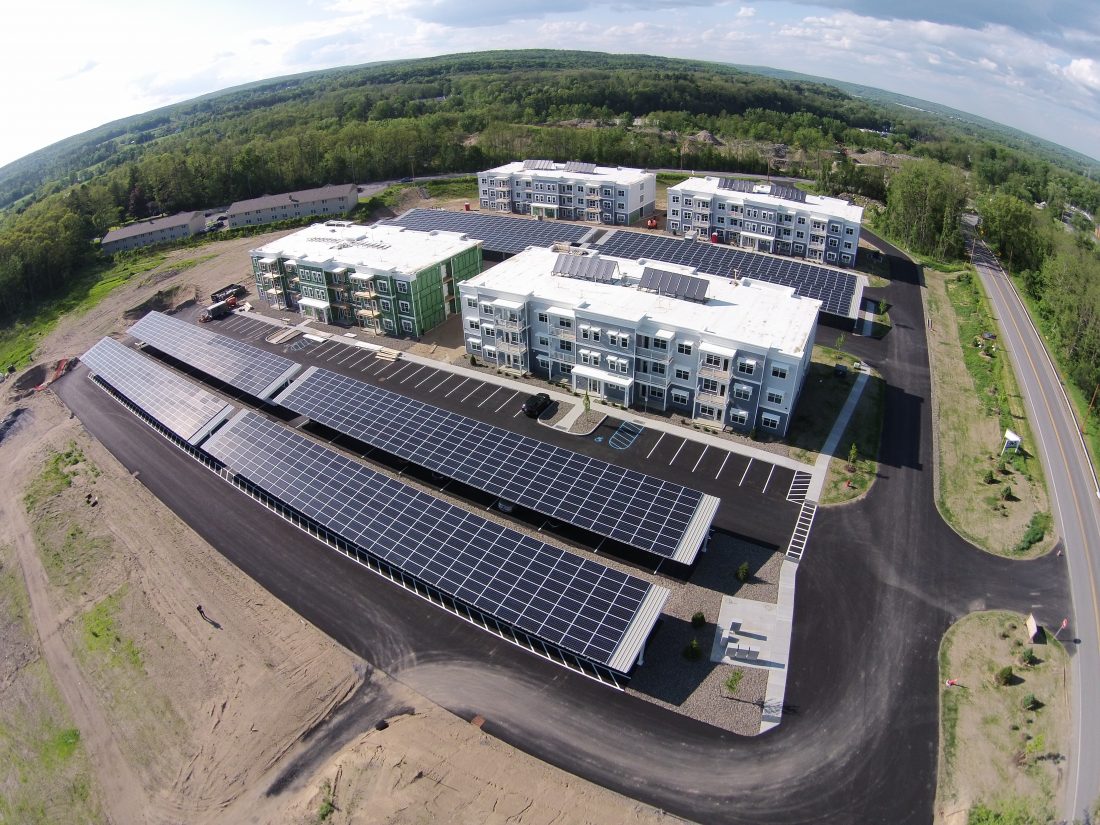 The New York State Energy Research and Development Authority selected the project, Solara Luxury Apartments in Rotterdam, as a winner in its Buildings of Excellence competition, and the project team shared a $750,000 award for its innovative approach to low-carbon design. Black Mountain played a critical role in helping Solara’s developers create a building that produces as much energy each year as it consumes, while keeping its price tag in line with more traditional construction.

“Buildings use nearly half of the energy in the United States–which means that combatting climate change will require us to fundamentally rethink how we build things,” said Jesse Schwartzberg, Black Mountain’s principal architect. “But if we’re going to increase adoption of energy-efficient practices, they need to be affordable. The Solara project is proof that you can be environmentally friendly, economically competitive and profitable.”

The 248-unit complex will use solar energy to produce enough electricity and hot water to offset 100% of the buildings’ annual energy consumption. The project relies many other considerations, though, to balance energy efficiency with cost effectiveness, and Black Mountain’s team played a lead role in making those determinations.

The firm used energy modeling software called Passive House Planning Package to determine the best materials, practices and technologies for the project. By analyzing every component of each building, from appliances to windows, Black Mountain was able to calculate Solara’s expected energy use — and whether it was more affordable to improve it by adding more insulation or another solar panel, for example.

While the project relies on some high-tech flourishes, such as 36 free electric-vehicle charging stations and a solar thermal hot water heating system, Schwartzberg said the project’s use of readily accessible materials and familiar building practices are equally enticing to developers, who need to keep a lid on costs.

“Developers often think they need to sacrifice affordability for green performance, but Solara shows they can go hand-in-hand,” said Dave Bruns, owner of Bruns Realty Group, the owner/ developer on the project. “Jesse and the team at Black Mountain Architecture were invaluable partners in helping us navigate the complex choices needed to develop a project that’s both financially and ecologically sustainable.”

After factoring in their energy savings, Solara tenants can expect to pay rents that are competitive with similar market-rate housing in the Capital Region: $1,350 to $1,880 for the one- and two-bedroom units, including all utilities: heat, air conditioning, hot water, electricity, 100 MB internet, Dish TV, smart home automation, automated package room, covered parking and unlimited EV charging.

Of the 53 projects that participated in the Buildings of Excellence Competition, NYSERDA recognized 28, awarding $18 million in all. The Solara team included several other partners including Bruns Realty Group, Harris Sanders Architects, Ballston Mourningkill Associates, En-Tech Associates and E2G Solar.

The competition supports Gov. Andrew Cuomo’s Green New Deal, the most aggressive climate change program in the nation, which puts New York state on a path to economy-wide carbon neutrality and an 85% reduction in greenhouse gas emissions by 2050. Each winning proposal demonstrated low-carbon performance, the ability for broad adoption, superior financial benefits for owners, and a healthy and safe living environment for occupants.

“It’s very challenging to build a net-zero model at a scale as large as the one we employed at Solara,” said Schwartzberg, who had previously worked on a 10-building, 156-unit complex with the same developer that was completed in 2016. “But the lessons we’ve learned can be translated to projects everywhere — including the Adirondacks, where we need both more affordable housing and more energy-efficient housing.”