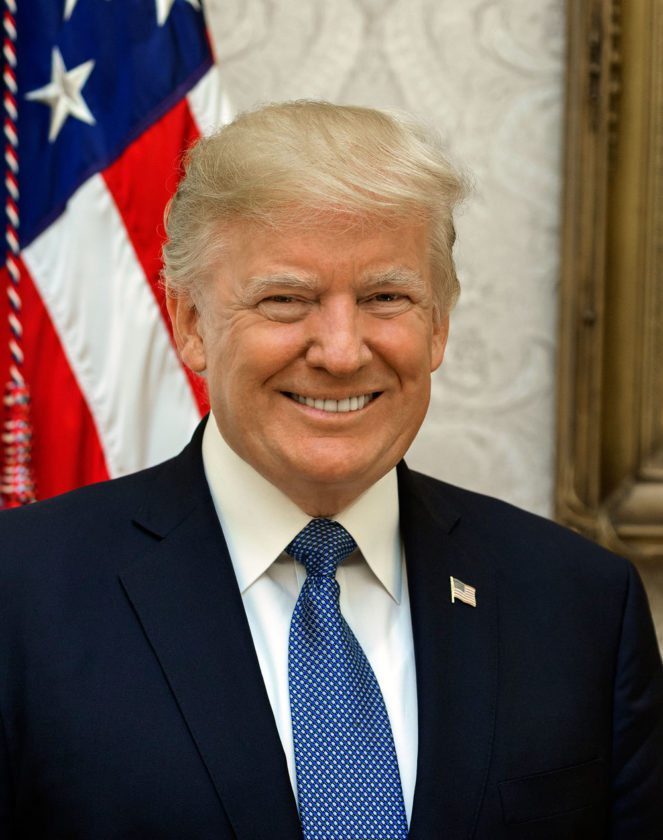 A day after laying out a road map to gradually reopen the crippled economy, Trump tweeted the kind of rhetoric some of his supporters have used to demand the lifting of the orders that have thrown millions of Americans out of work.

“LIBERATE MINNESOTA!” “LIBERATE MICHIGAN!” “LIBERATE VIRGINIA,” he said in a tweet-storm in which he also lashed out at New York Gov. Andrew Cuomo for criticizing the federal response. Cuomo “should spend more time ‘doing’ and less time ‘complaining,'” the president said.

Responding to pleas from governors for help from Washington in ramping up testing for the virus, Trump put the burden back on them: “The States have to step up their TESTING!”

Trump claimed Friday that “very partisan voices” had spread “false and misleading information” about the nation’s testing capacity. But he said “we’ll help New York and all of the other states get even better on their testing.” 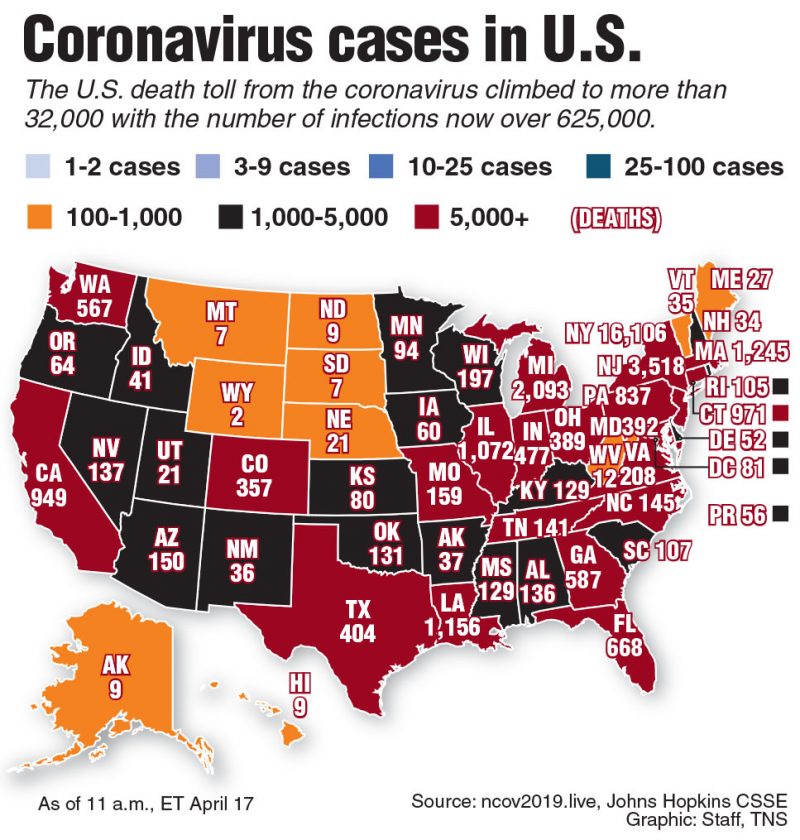 At the same time, at least two states took their first steps toward easing the restrictions.

In Florida, GOP Gov. Ron DeSantis said municipalities could reopen beaches and parks if they could do so safely. In Texas, Republican Gov. Greg Abbott said stores could begin selling curbside, nonessential surgery could resume and state parks could reopen.

Trump has repeatedly expressed his desire to see businesses reopen quickly and claimed earlier this week that he had total authority over the matter, even though the lockdowns and other social-distancing measures have been imposed by state and local leaders, not Washington.

“We may be opening but we’re putting safety first,” Trump said.

On Thursday, he outlined a three-step set of guidelines for easing restrictions over a span of several weeks in places that have robust testing and are seeing a decrease in COVID-19 cases, assuring the nation’s governors: “You’re going to call your own shots.” 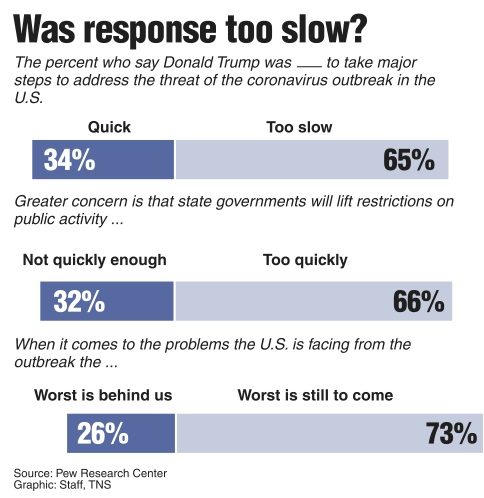 But governors of both parties suggested Friday that they would be cautious in returning to normal, with some warning that they can’t do it without help from Washington to expand testing.

“The federal government cannot wipe its hands of this and say, ‘Oh, the states are responsible for testing,'” said Cuomo, a Democrat. “We cannot do it without federal help.”

West Virginia Gov. Jim Justice, a Republican ally of Trump’s, said he would listen to medical experts in deciding how to move forward.

“I am not going to do something that I feel in my heart is the wrong thing that’s going to endanger our people,” he said.

“His unhinged rantings and calls for people to ‘liberate’ states could also lead to violence,” Inslee said. “We’ve seen it before. The president is fomenting domestic rebellion and spreading lies even while his own administration says the virus is real and is deadly.”

Democratic Virginia Gov. Ralph Northam said he and his staff are focused not on the president’s tweets but on fighting a “biological war.”

“I do not have time to involve myself in Twitter wars,” said Northam, who is a medical doctor. “I will continue to make sure that I do everything that I can to keep Virginians safe and to save lives.”

The clash between Trump and Cuomo was personal, with the president complaining the governor hasn’t said thanks for the help he has received from Washington. Cuomo countered by saying: “I don’t know what I’m supposed to do, send a bouquet of flowers? ‘Thank you to the federal government for participating in a federal emergency.'”

Even in largely rural states with small populations, such as Wyoming, Maine and South Dakota, governors said they were not anxious to quickly resume business as usual.

“Until we’ve got the testing up to speed — which has got to be part of the federal government stepping in and helping — we’re just not going to be there,” said Wyoming Gov. Mark Gordon, a Republican.

The University of Washington, whose computer models have frequently been cited by health officials at White House briefings, predicted Friday that Vermont, West Virginia, Montana and Hawaii could open as early as May 4 if they restrict large gatherings, test widely and quarantine the contacts of people who test positive.

Iowa, North and South Dakota, Nebraska, Utah, Arkansas and Oklahoma, however, are among states that would need to wait until mid-June or early July. About half the states should wait until at least early June to reopen, and all should gauge the capacity of their public health systems to handle outbreaks, the institute said.

Worldwide, the outbreak has infected more than 2.2 million people and killed over 150,000, according to a Johns Hopkins University tally based on figures supplied by government health authorities around the globe, though it has becoming increasingly clear that the true numbers are much higher.

The shutdowns have inflicted heavy damage on economies around the world. In the U.S., the crisis has cost at least 22 millions Americans their jobs, pushing the unemployment rate toward levels not seen since the Great Depression.

Many Americans, especially in rural areas and other parts of the country that have not seen major outbreaks, have urged governors to reopen their economies. Protesters have taken to the streets in Ohio, Texas, North Carolina, Kentucky, Virginia and Michigan, where more than 3,000 turned out on Wednesday in what looked like one of the president’s rallies, with Make America Great Again hats and Trump flags.

Protests continued Friday, including one outside the home of Democratic Gov. Tim Walz of Minnesota and another in Idaho, where the governor is a Republican.

Public health experts have warned that an easing of the shutdowns must be accompanied by wider testing and tracing of infected people to keep the virus from coming back with a vengeance.

Meanwhile, China, confirming long-held suspicions, acknowledged that the coronavirus death toll in the one-time epicenter city of Wuhan was nearly 50% higher than reported, amounting to more than 4,600.

In Italy, Spain, Britain, the United States and elsewhere, similar doubts emerged as governments revised their death tolls or openly questioned the accuracy of them.

Authorities said that almost everywhere, thousands have died with COVID-19 symptoms — many in nursing homes — without being tested for the virus, and have thus gone uncounted.

In Italy, for example, where the official toll has climbed past 22,000, a government survey released Friday of about one-third of the country’s nursing homes found more than 6,000 residents have died since Feb. 1. It was unclear how many were a result of COVID-19.

In Britain, with an official count of about 14,600 dead, the country’s statistics agency said the actual number could be around 15% higher. Others think it will be far more.

The official death toll in New York City soared by more than half earlier this week when health authorities began including people who probably had COVID-19 but died without being tested. Nearly 3,800 deaths were added to the city’s count.

Sedensky reported from Philadelphia. Associated Press journalists from around the world contributed to this report.

NEW YORK (AP) — After a three year halt due to financial problems, work resumed Monday on a Greek Orthodox church ... 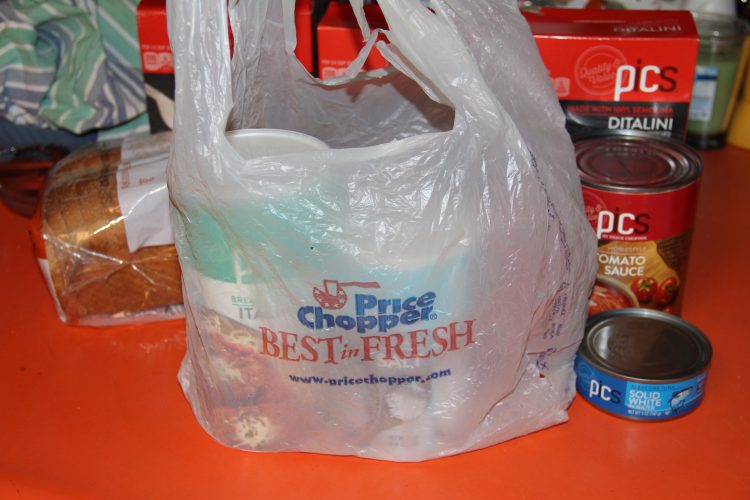 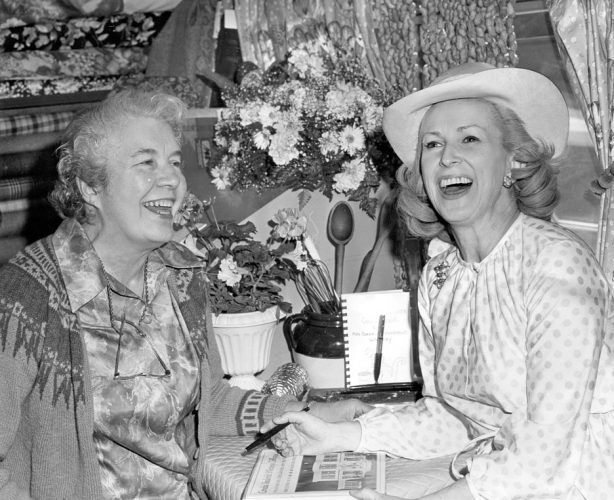