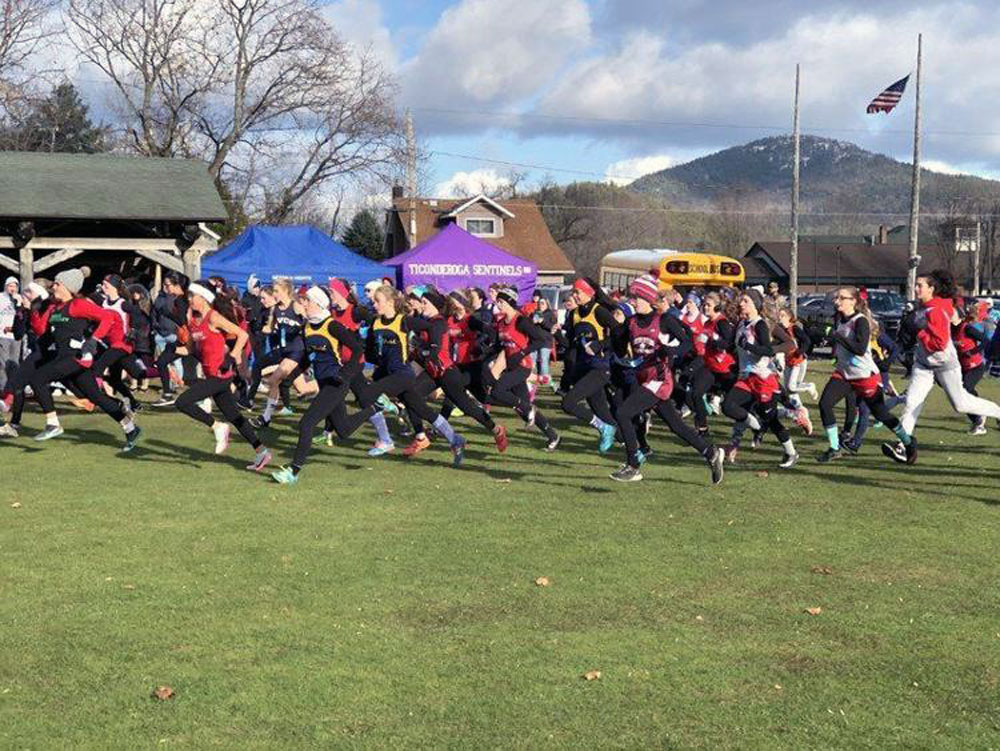 Runners look to get a good start at the beginning of the Section VII cross country championships at Cobble Hill Golf Course in Elizabethtown last Friday. For the first time in a decade, Section VII will host the NYSPHSAA cross country championships on Saturday, Nov. 16, with runners crossing the SUNY Plattsburgh starting line at 9 a.m. (Provided photo — Press Republican)

PLATTSBURGH — Nearly 1,000 high schoolers will race in the city this weekend and they could be stringing along an estimated $348,000 in county-wide spending.

For the first time in a decade, Section VII will host the NYSPHSAA cross country state championships on Saturday, Nov. 16, with runners crossing the SUNY Plattsburgh starting line at 9 a.m.

City of Plattsburgh Mayor Colin Read ran an analysis to determine, per The Bureau of Economic Analysis’s guidelines, the race’s possible effects.

“The regional economic impact of such events is a wonderful boon to our county, especially as our region’s hotels hit their off-season,” Read said.

“While the city itself does not have the stock of hotels that will house these athletes and their families, we are certainly proud that the event is coming here and are grateful for the regional impact they have.”

Section VII Executive Director Matt Walentuk said, of the state meet’s 900 to 1,000 runners, 65 will be racing from the Champlain Valley Area.

“Typically the winning team in each classification, for both boys and girls, send seven runners,” Walentuk explained. “Then there are five, what we call, ‘at large’ runners from the other schools that didn’t win, but had the faster times.”

“He’s been working on this for the last three years,” Walentuk said.

Mother Nature gave coordinators a run for their money last week, though, delivering between six and 12 inches of snow.

“We’re just trying to figure out the logistics around that,” Walentuk said. “We made some slight adjustments to the course to make it safer.”

That included taking out a sharp decline and avoiding a wet and/or icy area, he said.

“We have a crew of people getting the course and trails in tip-top shape.”

But the footpath hasn’t been the executive director’s greatest worry.

“The biggest concern will actually be making sure the athletes stay adequately warm,” Walentuk said. “Both before and after their race.”

With help from Fieldhouse Assistant Director Taylor Sullivan, unlike usual, the teams and their tents won’t be set up outside in the cold this time around.

“Everything is being moved into the Fieldhouse instead,” Walentuk said. “Our goal is to have the kids warm-up and race outside, but get them back into the warmth.”

And, he added, the New York State Public High School Athletic Association has purchased around 1,200 heat-shield blankets for the runners, too.

“It’s an outdoor sport, though. You always run in all sorts of weather conditions.”

In looking at other high school sports, Walentuk said cross country races bring some of the heftier numbers.

“Our running sports are the biggest single-event sports that are hosted,” he said. “Those students will be staying at hotels and they will be going out to restaurants — and so are their parents.

“I imagine if you were to call any hotel, you would be hard-pressed to find an open room this weekend.”

The Comfort Inn & Suites on Route 3 in the Town of Plattsburgh was booked this Friday and, per a response from the hotel’s general manager email account, it had been that way for a while.

“We have had to turn down multiple reservations requesting Friday night stays,” the response says. “The impact of rooms at our location will be in the 60 to 70 range for (the state meet) event.

“We also have some college sporting events this weekend, as well.”

North Country Chamber of Commerce Assistant Director of Tourism & Marketing Alyssa Senecal said the chamber was excited to have the athletes, staff, family and fans back for the race.

“Events like this bring new eyes to the Adirondack Coast, fill our hotels and encourage more spending in our community,” Senecal said. “This is an amazing thing during any month, but most especially during a shoulder month when we traditionally have rooms available nightly.”

Mayor Read said it was that sort of hotel spending that helped shape the estimated economic impact report.

“The Bureau of Economic Analysis states that for every dollar of hotel spending, there is on average another $0.71 of restaurant purchases, another $0.53 in entertainment spending, and another $0.74 in shopping,” he explained.

The mayor’s calculations were based on 1,000 runners, plus an added 500 people for family and/or coaches, and used an average of $100 per hotel stay for one night.

“In addition, it contributes the full year equivalent of 3.7 jobs and generates $45,000 in tax revenue of various sorts, most notably sales and occupancy tax revenue,” Read said.

“Of course, this is a big boon to the Route 3 strip where these tourism facilities are located,” he added, “but, all of Clinton County benefits overall when any of our municipalities can generate these sorts of revenue.”

The coronavirus pandemic isn’t over. Its economic impact isn’t, either. More than four months after New York ...