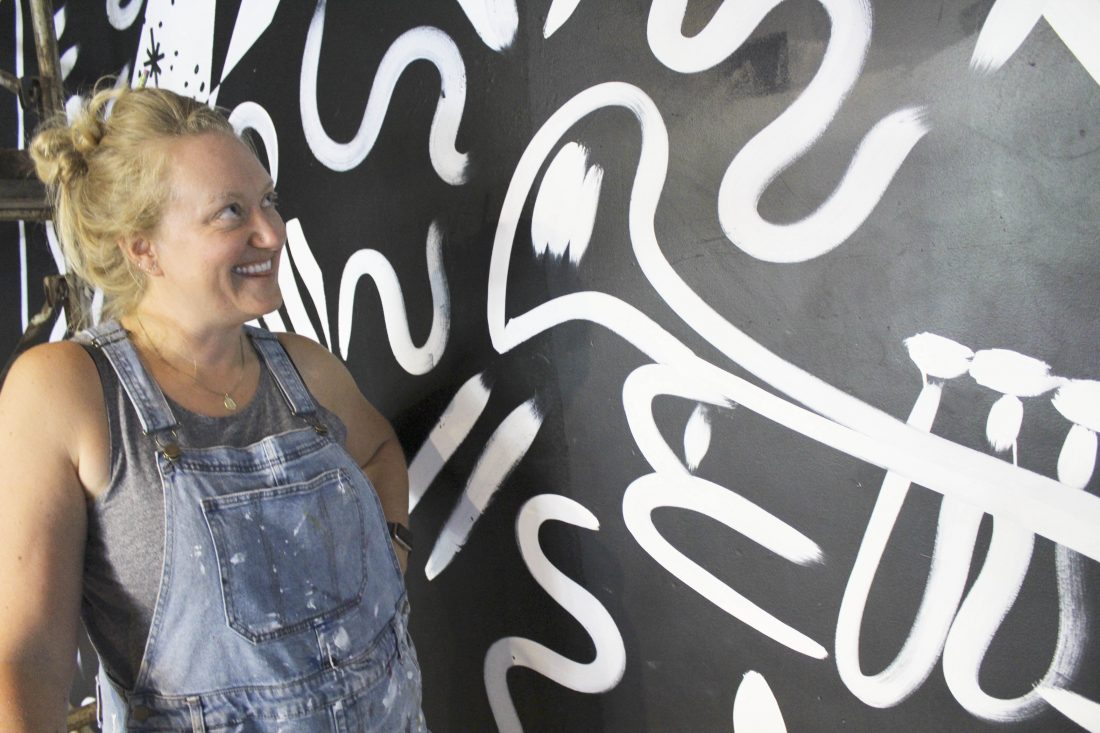 CORTLAND — The COVID-19 pandemic, and its quarantines, created a “major pivot” for Molly Andrejko and her mural project.

“Oh my gosh. I can’t believe I bit this much off,” she said, paintbrush in hand on June 29, putting strokes on a mural on one entire wall behind the Cortland Youth Bureau stage at 35 Port Watson St.

“When I bit this project off, it wasn’t too much. I was working with people. Then COVID happened,” said the artist and art teacher at St. Mary’s School in Cortland.

It took her a week and a half to paint at the end of June at the center, where kids can get free music lessons, practice drums and guitar in sound-proof rooms and play at live band nights.

“This project is meant as a gift to all of the youngsters in the community who use the youth center stage to rehearse, try out new sounds and put their hearts and souls on the line when they are daring enough to perform,” said Andrejko, a singer in the Speculators. “I want them to know that their Cortland musical ancestors have their backs.”

Andrejko is one of three Cortland County artists to receive $2,500 commissions for the project through CNY Arts in Syracuse, which administers state funding to support the arts. Emily Gibbons of Cortland and Nathan Loda of Homer also received the grants.

Gibbons, a watercolor painter, is doing a Plein Air Cortland program, featuring painting demonstrations and seeking public input on landscapes to paint via pleinaircortland.com. She will host a plein air paint-out this summer and plans an exhibit. With social distancing, it may be virtual, she said.

Loda, a realistic painter who brings history into his pictures, planned on interviewing Cortland people and portraying the history of the area on the canvas. With social distancing an emphasis, he has to replan how to do this, he said.

Project with a huge scope

Andrejko got the thumbs up from the Cortland Youth Bureau for her project.

“It’s going great,” she said. “I am sad not to have a bunch of kids running around, working with me.”

Andrejko worked with the Cortland County Historical Society, which did a presentation on Cortland’s music history for her and students, and sought artistic images from kids through social media and email to plan the event.

The mural will be unveiled when school reopens, in cooperation with the Cortland High modern rock music program.

“I love taking on projects with a huge scope,” said Andrejko, who created murals Otto Jenke’s physical therapy office and Experience Cortland’s tourism seat on Main Street. “I think it makes me a better community member and musician.”

With the quarantines, Andrejko asked kids to send her designs through email, Facebook and Google Class.

She made instructional videos for kids via her cell phone. Then she edited them on the computer and posted them to YouTube.

Two planning meetings took place before the quarantine, one with mural artist Crystal Lyon, who did the steampunk female on the Cortland Corset building in 2018. Lyon taught kids how to make a mural, “soup to nuts.”

The second was with Tabitha Scoville and Liz Wavle Brown of the Cortland County Historical Society.

“They were amazing to work with,” Andrejko said.

The pair taught Andrejko and students the history of music in Cortland since the 1800s, via a slide show.

“That was so thorough and cool,” Andrejko said. “As a musician myself, I was so interested. The kids were interested.”

Andrejko created a play list of Cortland musicians on YouTube and has listened to all the musicians she is featuring.

“For me, the most interesting part of Cortland’s music history is the variety of genres that have come out of Cortland,” Scoville said. “There is everything from jazz to heavy metal and everything in between.”

What’s on the wall

A rainbow signifies “Rainbow in the Dark,” a Ronnie James Dio song. The late Dio, of Cortland, is a heavy metal star known around the world.

A lightning bolt captures the excitement of the music scene in Cortland and is another homage to that Dio song, as is a maloik hand gesture of the horns, which Dio used in concerts. It’s said to ward off the devil or the evil eye. He’d walk into the house and his Italian grandmother would hold up the maloik and go, “sssss, ssssss,” Andrejko said.

A rocket blasting off points to “Rocket Ship to the Moon” by Cortland country musician Tex Roe.

Bluegrass from the 1800s up to the Delaney Brothers Bluegrass is highlighted as well as a crown, a symbol for the crown city of Cortland.

Andrejko pointed to a few notes: “This is the first few notes of ‘Caderna,’ an homage to St. Anthony’s and the Cortland Old Timers Band.” The music was arranged by Arnald Gabriel, a conductor in the U.S. Air Force Band and Cortland native. The song is a tradition at the St. Anthony’s Day Festival.

Spiegle Willcox’s trombone with jazz coming out of it is on the wall, with a swirly symbol submitted by a kindergartner, Andrejko said. “He said, this is what he thought when he listed to Spiegle Willcox playing jazz.”

“I like this corner,” the artist said. Round circles with Willet, Truxton and St. Anthony’s written in them point to the buttons worn by community band members in the late 1800s and early 1900s. The YMCA had a band, the Eagles Club had a band, even the mechanics in the area had a band, Andrejko said.

A fiddle points to a Black female fiddle player out of Homer High School in the 1930s, her name unknown, but she played for Earl Hines, a nationally known musician. And it points to John McDermott, a state fiddle champion in the 1900s, who came from Cortland.

“I love the mural project and I’m glad that the Youth Center is where it will be,” Scoville said. “I can remember when the youth center was built and that the battle of the bands was a big deal at that time. I remember going to a couple of shows to see kids I used to babysit participate and the place was packed to the max. … The youth center is the perfect place to have this mural.”