Feeling like a kid again at Rulfs Orchard in Peru

An apple on a tree (Enterprise photo — Elizabeth Izzo)

Visitors ride the wagons among the apple trees at Rulfs Orchard in Peru on Saturday, Oct. 19. (Enterprise photo — Elizabeth Izzo)

You can pick apples and pumpkins at Rulfs Orchard in Peru. (Enterprise photos — Elizabeth Izzo) 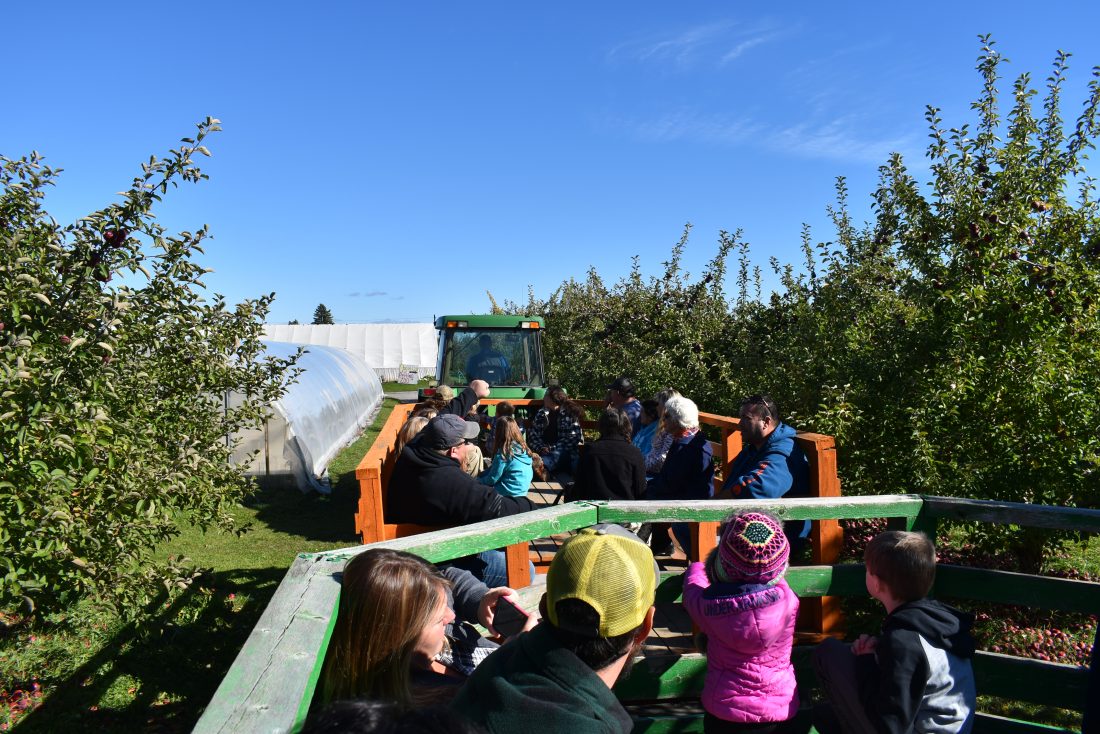 Visitors ride the wagons among the apple trees at Rulfs Orchard in Peru on Saturday, Oct. 19. (Enterprise photo — Elizabeth Izzo)

The first thing I noticed was the number of cars.

The parking lot at Rulfs Orchard, ten times the size it had been when I was a kid, was packed with cars sporting license plates from as far away as Minnesota. Roaming packs of people, with dozens of small children running between them like bees around a hive, were everywhere.

When I visited Rulfs last weekend, long the staple business in my hometown of Peru, I was surprised to find it was no longer the small-ish, loosely kept secret I remember it being. It had blossomed into a full-blown, bustling tourist attraction.

So it seems only natural that I would return to the orchard, this time as a tourist. 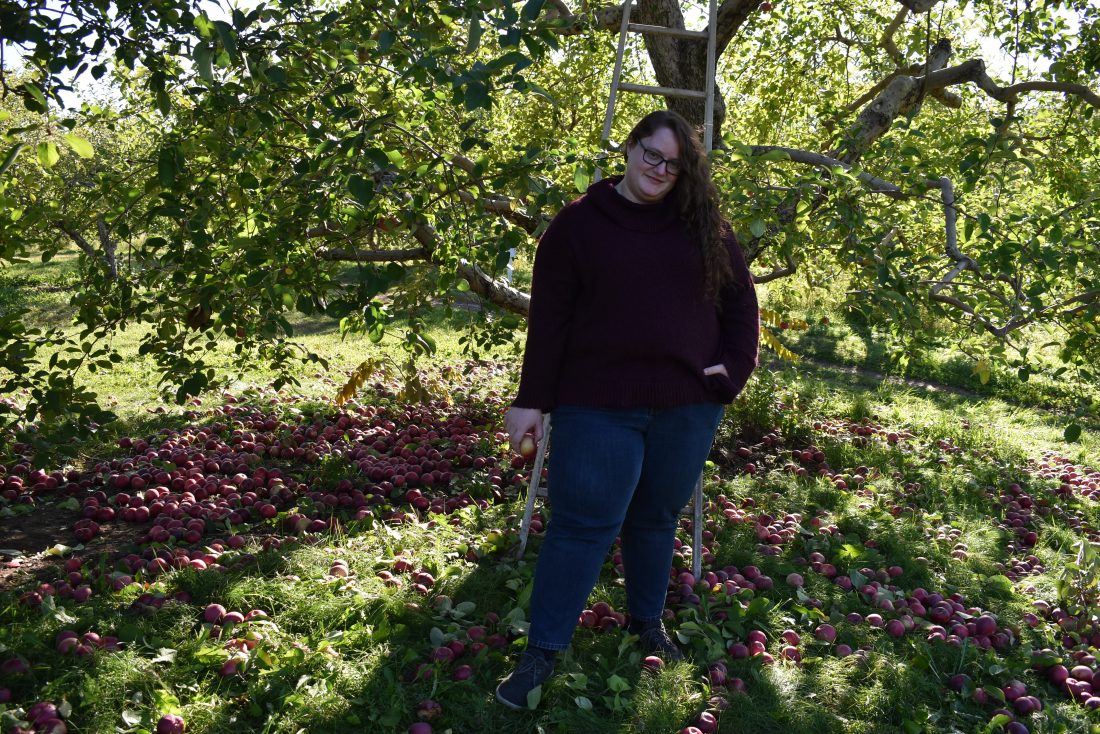 On nearly all of my social media feeds last Saturday, the seemingly endless shots of hikers looking thoughtfully into the distance from a mountain peak were replaced with videos of wintery landscapes at Cascade and Whiteface. But in my hometown, the weather was around 10 degrees warmer, and the same bright fall foliage that attracted leaf peepers to the High Peaks earlier this month still lingered there.

So I took one of my fall-loving friends, Tori Martinez, on a mission to find that last gasp of autumn before the region is buried in snow. 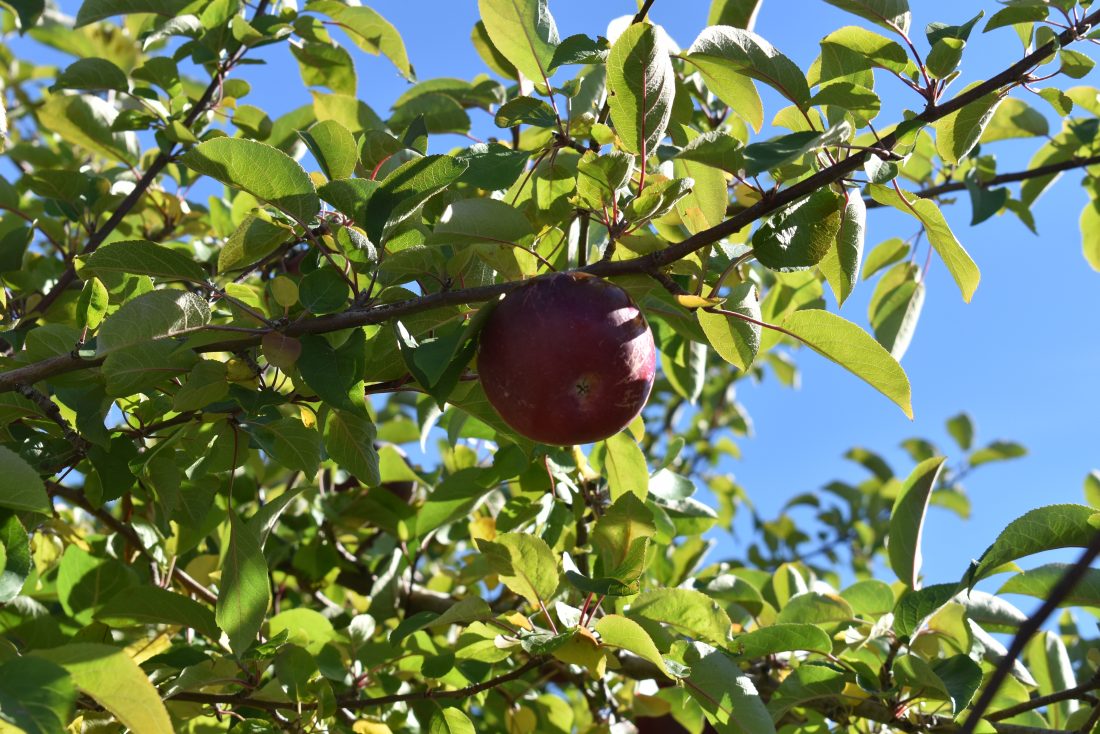 An apple on a tree (Enterprise photo — Elizabeth Izzo)

When we arrived at Rulfs late Saturday afternoon, we jostled for a place to park as leaves swirled around us. We made a beeline for the new farm store. The smell that welcomed us when we opened the doors — a sweet, aromatic medley of fresh apples and baked goods — immediately triggered for me what’s called olfactory memory. For a second it was as if I’d never left this town.

Rulfs, probably one of the most recognizable Peru businesses for out-of-towners, was more a dairy farm than an orchard in its infancy.

The business was established in 1952 by Bob Rulfs, a Westchester County transplant. He purchased a small swath of land here that came with four milk cows, three heifers and 12 acres of apple trees. He sold primarily dairy products at first. Then Rulfs started hawking fruit from a wagon in his front yard, and the demand for his apples grew to a fever pitch.

It wasn’t until 1983 that the Rulfs family started pressing their apples into cider with their own cider mill, and wasn’t until 1987 that a bakery — where the now-coveted apple cider donuts were churned out — was added to the property. 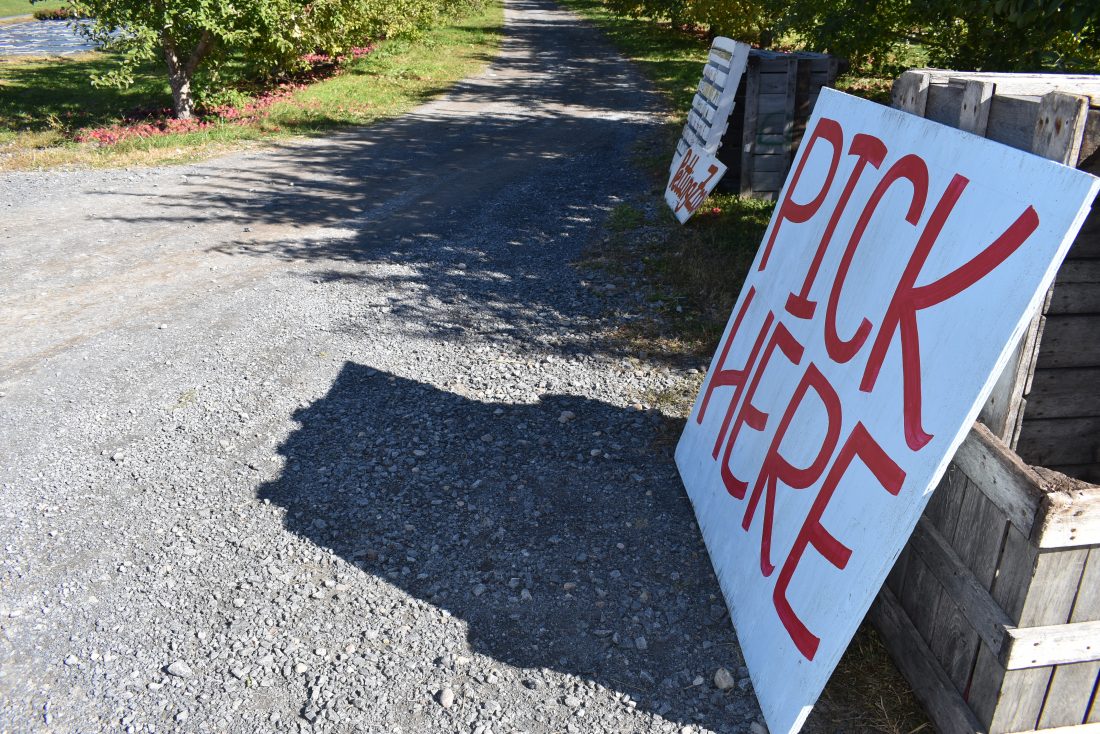 You can pick apples and pumpkins at Rulfs Orchard in Peru. (Enterprise photos — Elizabeth Izzo)

Rulfs eventually sold the farm to his oldest son, Jon, who later took over the orchard and roadside store, too.

When I was a kid, Rulfs was a place where my family and I went to buy fruits and vegetables during the week. We didn’t go there looking for an experience, we didn’t walk through the fields as a quaint weekend activity. We weren’t looking around for an opportunity to snap a #FallVibes Instagram pic. This was where my mother picked up apples for my brother and I to take to school, where she bought squash for weeknight meals. This is where my parents would pick up apple cider donuts on the way back from church.

Our pre-Halloween wagon rides out to the pumpkin patch were aboard a rickety trailer attached to a small tractor, accented by conversations with our neighbors and friends under the fleeting afternoon light. My parents held onto my brother and I to keep us from falling off as the wooden slab-on-wheels veered across uneven farmland.

When I told her I was writing this column, my mother made a point of saying that, when we jumped off that trailer and ambled into the pumpkin patch, I always chose a small pumpkin close by and called it a day. I was, apparently, unimpressed by the activity.

The business is now in the hands of Jon’s daughters, Shannon Rulfs and Amanda Wisher. The wooden trailer out to the pumpkin patch that I remember has been replaced with a small fleet of large, brightly-colored wagons with built-in seating. 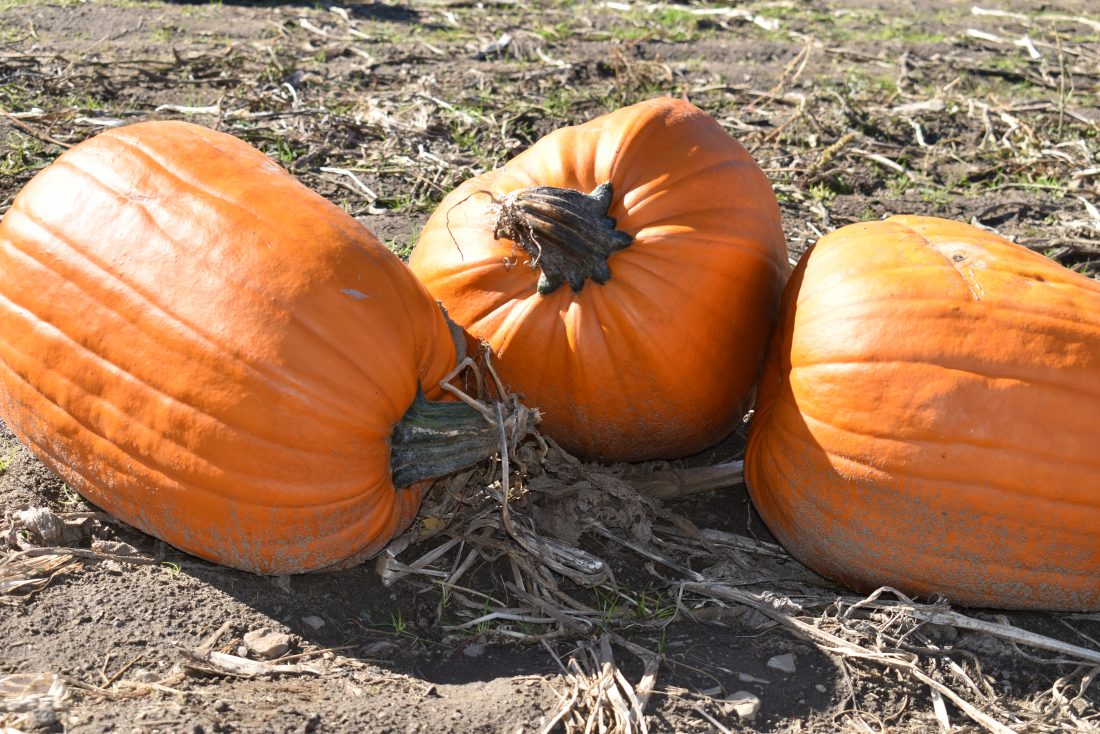 Three years ago, the family spent upward of $2 million on a new roadside farm store, a bright red building that dwarfed the size of its predecessor. With the new building, they had more than enough space for a cafe, a floral shop, a gift shop and a bakery. The family expanded their parking capacity tenfold, and somewhere along the way they added greenhouses on site.

The Rulfs have found success in offering not only a wide range of produce, but offering a lot of experiences for visitors, whether it be the petting zoo for kids, the corn maze, or apple, berry or pumpkin picking. The owners have also found a way to effectively market the orchard, something that seems simple, but many local farmers struggle to do.

What was once a modest 12-acre orchard has grown to encompass around 200 acres, according to a 2017 profile of the farm in Strictly Business magazine.

The town of Peru, as a whole, isn’t doing too bad either. The population has continued to grow throughout the last 90 years, seeing a slight 0.2% decline in 2016 for the first time since the 1930s, according to U.S. census data. There are a number of new brick-and-mortar businesses that have popped up in town over the last decade, and for the most part, the same businesses that I frequented as a kid are still there.

But it’s the story of the Rulfs’ success that a lot of people from Peru — myself included — are particularly proud to tell. 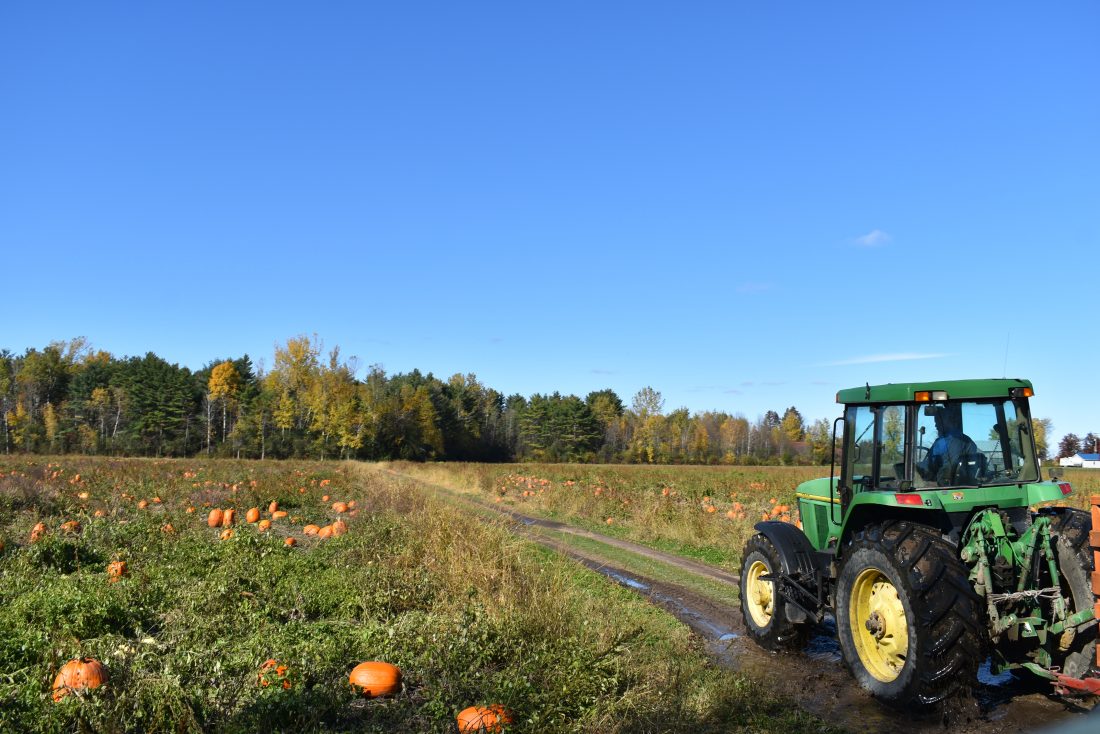 After we took a quick look through the orchard’s new farm store, Tori and I joined the steady stream of people venturing out into an adjoining greenhouse lined with pumpkins.

These weren’t your picture-perfect squash. Though some of them were perfectly round in that Charlie Brown’s Great Pumpkin sort of way, most were misshapen orange orbs. We caught a ride to the pumpkin patch to get our own.

After we wandered through the field — stepping between pumpkins with seeds and flesh jutting from a hole in their exterior, as if they’d exploded in some peculiar accident — we spotted the perfect one. I mean, “perfect,” for me, meant the pumpkin had a stem and we could lift it. For her, it meant the pumpkin was a nice shape. This checked all of those boxes.

We made our way back to the wagon just as the sun started to dip toward the western mountains.

There was something familiar about the rough metal hum of the tractor’s engine as we wove our way through fruit and vegetable fields back to the greenhouse, but I didn’t know anyone else riding with us, and that somehow made the experience feel new.

The pumpkin joined a box of apple cider donuts, a half-peck of McIntosh apples and a gallon of apple cider in the back seat of my car. With our fall mission complete, we started the journey home. 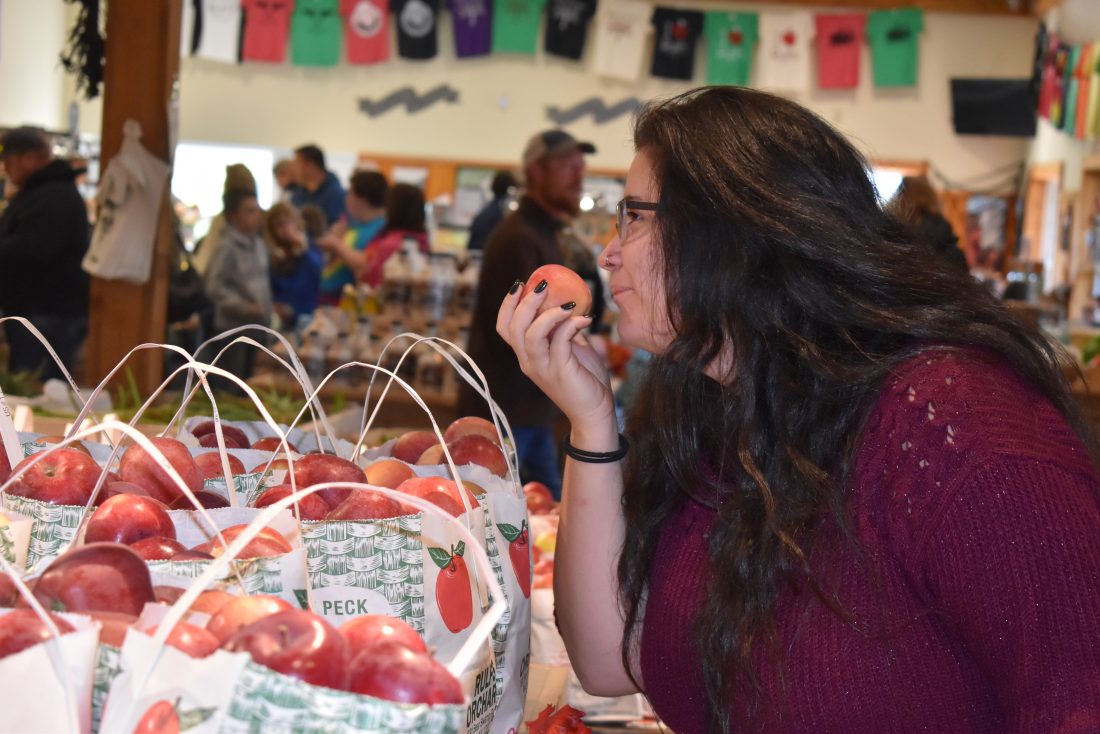 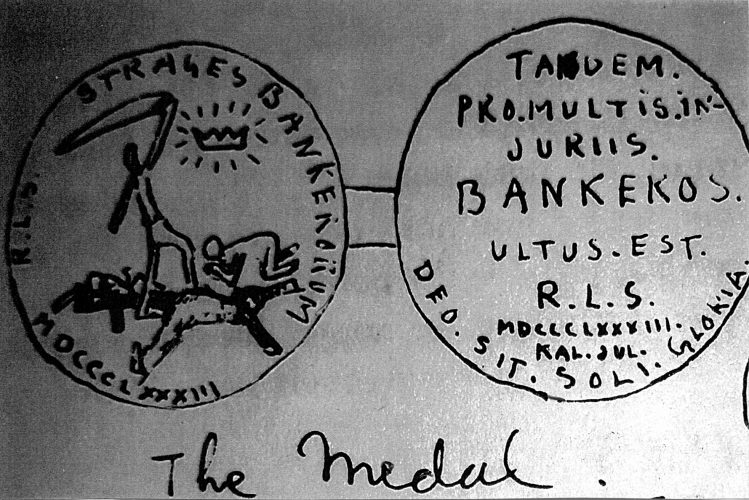