Skiing with a smile 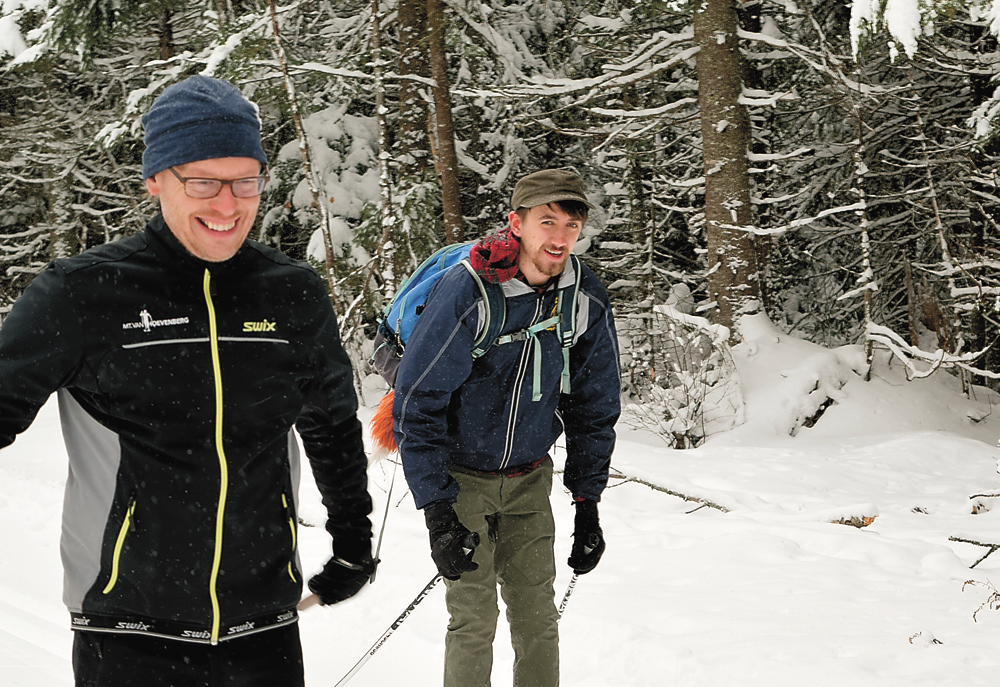 I’ve never cross-country skied. OK, that’s a lie. I did last year, but I fell most of time, so I don’t really like to count it as an actual outing.

Most folks today are aware of the funnily named SAD, which stands for seasonal affective disorder. It’s a form of depression caused by lack of sunlight, cold weather and little motivation to do recreational activities. In a part of the world where winter lasts from November to May, SAD can hit hard.

Now, if you grew up in the North Country, you might be well prepared for the mental stresses of the season. You hike with snowshoes, go ice fishing, ride a snowmobile or slip on some skates.

I, however, am from the suburbs outside New York City. Instead of spending my winter weekends on a ski mountain, I was cooped up in a humid wrestling room with 20 other boys doing up-downs and what seemed like infinite sprints across the sweat-soaked mats. Those were good days — tough but good. Depression wasn’t a factor in my life then.

But that was high school, seven years ago. Since then, I’ve moved to the Adirondacks, and all of last winter, I really just did not know what to do with my time. Sleep and endless YouTube holes of “Top 100 ‘Oh My God’ moments in WWE history” were less of a cure and more of a painkiller for my situation. And I don’t even watch wrestling, which is the weird part. 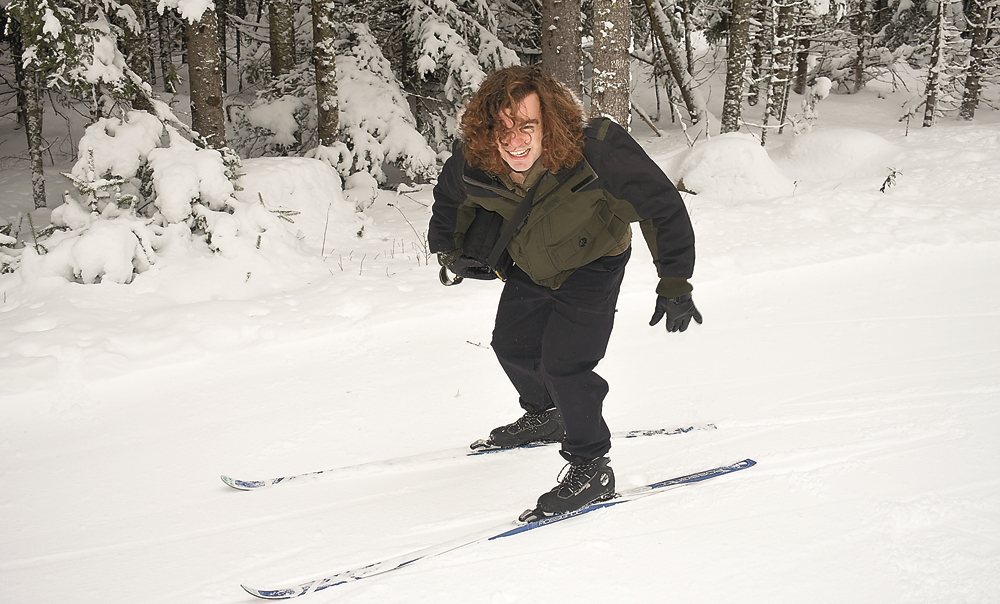 I didn’t want to repeat the same thing this winter, so I made a promise to myself. I was going to learn to how to ski, cross country, that is. I still have a big fear of anything downhill ever since I went snowboarding at Sterling Forest in the 10th grade and got my face bashed in by another rider. I was on a trail I shouldn’t have been, fell and got steamrolled by a more experienced snowboarder. I was fine, no concussion, but I did black out for a few seconds and had a large yellow bruise on my forehead for a few weeks. The forehead, being the thickest part of the skull, is the safest part to take a blow.

I called up Kris Cheney-Seymour — he’s the manager at the Mount Van Hoevenberg Nordic center — and asked if he would give me and my co-worker Jesse Adcock a beginner’s lesson.

Cheney-Seymour grew up in Saranac Lake and competed nationally. For 20 years he coached everyone from little kids to Olympians such as Lowell Bailey, Billy Demong and Tim Burke. He was more than happy to oblige my request.

Cross-country skiing dates back to prehistoric times as a means of transportation while on the hunt for animals like woolly mammoths. Some of the earliest known cross-country skis can be seen in cave paintings in China’s Xinjiang region, which are more than 10,000 years old.

Jesse and I didn’t look tough enough to hunt down mammoths, but still. 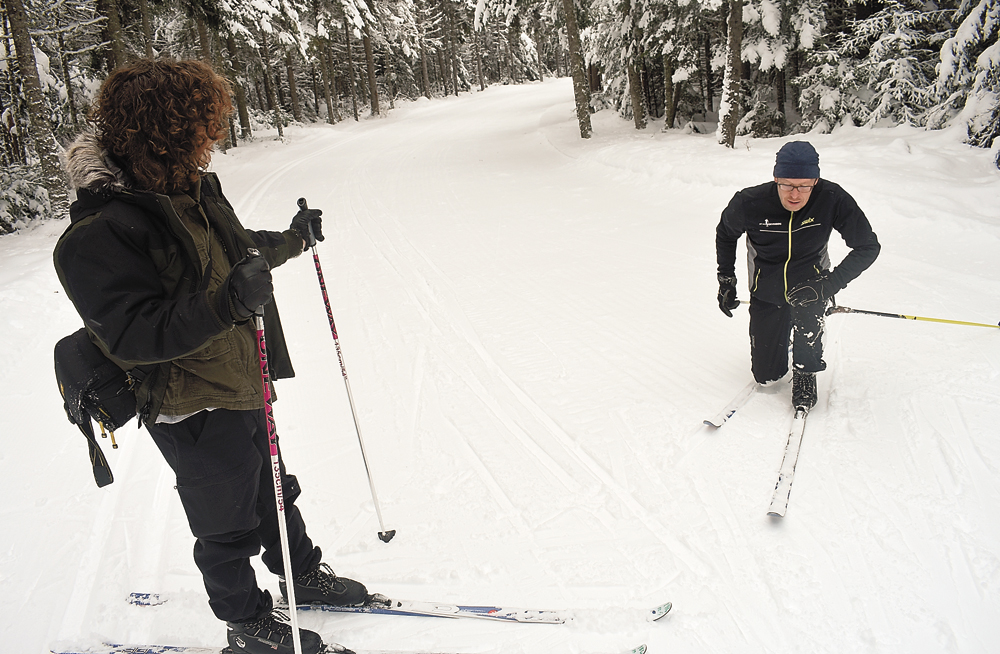 Kris Cheney-Seymour, left, demonstrates how to get up on cross-country skis after a fall. (Enterprise photo — Griffin Kelly)

Just putting the skis on is probably the hardest part. You have to line up your boot perfectly with this little notch in the ski, and you can’t have any snow in the way, which is difficult because you’re surrounded by the stuff. Even when I thought I had it right, the ski would go limp and fall from my boot. Jesse was able to do it well enough, but Cheney-Seymour had to help me with mine, which kind of felt like when you’re a kid and the shoe salesperson puts your foot in that funny measuring device.

Once they were on the skis felt fine, but Jesse and I were sticking to the snow. Other skiers looked as if they were sailing by, while we had hit a reef.

Instead of taking off the skis, waxing and then trying to get them back on again, Kris had us do a classic team-building exercise. Jesse lifted his foot and stuck his ski in the snow perpendicular to the ground. He held on to my shoulder while Cheney-Seymour waxed the bottom of the ski. Next it was my turn. A big glob of snow had taken a liking to my left ski and wouldn’t come off without a fight. My leg began to feel heavy.

“Oh, I’m falling,” I sort of yelled with my arm wrapped around Jesse. I nearly pulled him to the ground, but he held his stance and saved me. 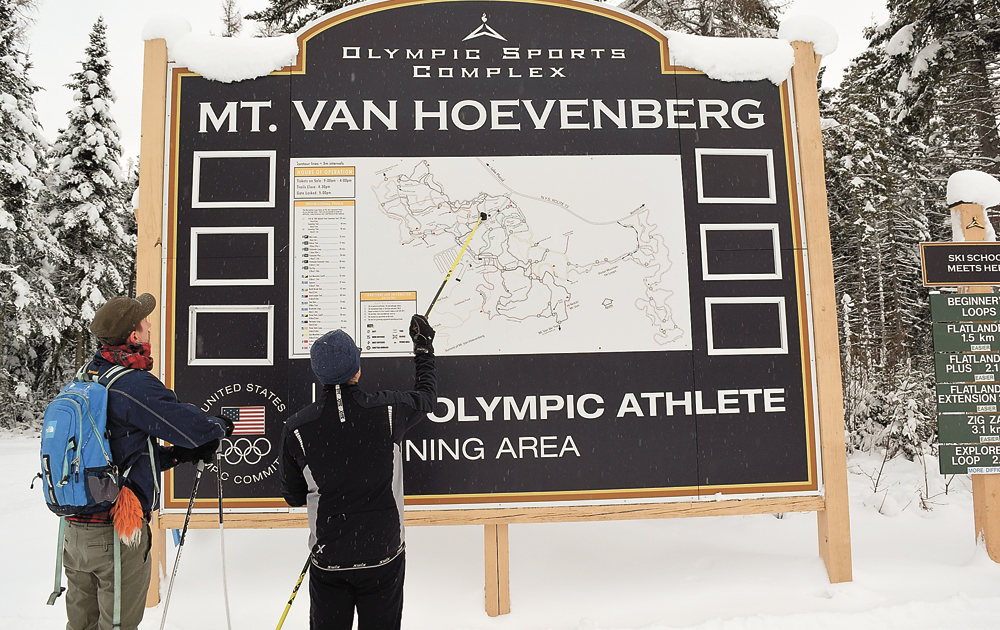 Next, Cheney-Seymour showed us the perfect stance and movement.

“You kind of want to look like a hunched-over gorilla,” he said. “Knees slightly bent with your arms just hanging at the side. You never want to be completely straight up; otherwise you risk falling backward. And when you move your arms, you’d want to do it as if you raising and lowering a cup of water, trying your best not to spill any of it.”

We stood in place for a few moments, practicing the motion, looking like a couple of lazy dancers who don’t know any other moves — reserved Carlton Bankses.

When you start moving, there is a certain rhythm you want to maintain. As your left leg goes forward, so does your right arm — same pattern for your right leg and left arm. It’s a little confusing at first, a body-brain teaser, like patting your head and rubbing your stomach at the same time. But once I stopped thinking about it so much, the rhythm came naturally.

As we headed down the Bobcat trail, a nice and easy route, we were passed by more experienced skiers, young and old. 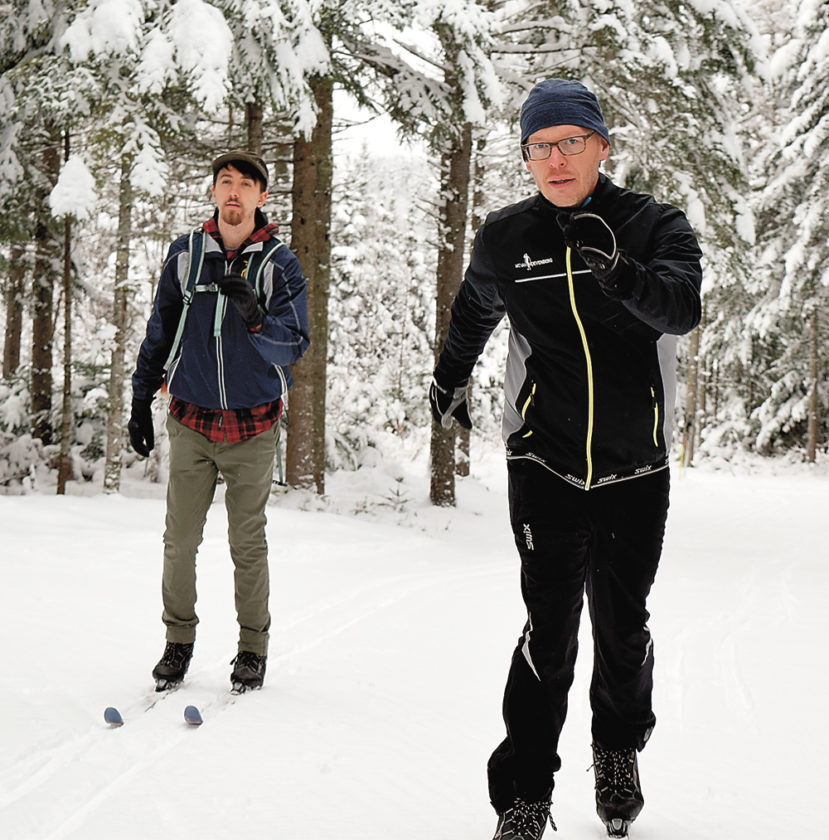 “The oldest known skier that I see here somewhat regularly is 96 years old,” Cheney-Seymour said. “Cross-country skiing is absolutely a sport for all ages. Those who continue to do it are often very young at heart. There’s a sense of adventure and accomplishment. It’s a wonderful physical activity.”

That it is. Only a few minutes in did I start to feel not exhausted, but exerted. Every muscle felt as if it was being worked. Using just the arms as if you are rowing a boat is even harder. It felt similar to an ice-climbing phenomenon known as the “screaming barfies,” which is when you put strain on your arms while lowering your circulation because your arms are generally above you. When the blood starts pumping again, it hurts. You have to swing and rotate your arms regularly to avoid the pain.

Aside from the physicality, Cheney-Seymour said the hardest hump for beginners to get over is the right mindset.

“For people who are excited to learn and to be out in the snow and embrace all of the parts of skiing or cross-country skiing, that’s usually one of the biggest first hurdles,” he said. “Next is willingness to learn and to be uncomfortable. Skiing is something that is, for a lot of people, not natural or intuitive, especially if they’re learning it as an adult. You’ve got to be able to listen to and accept guidance.”

Despite some physical strain, cross-country skiing was probably one of the most fun activities I’ve ever done. It brought me back to my wrestling days without all the ringworm and weight cutting. It got my heart racing and my mind feeling good. But there was also an enormous sense of calmness. I wasn’t thinking about work, or that I need to do laundry or that I keep buying too much food at the grocery store. I was just skiing in the woods with a friend and a trainer. And it was good.

Jesse reacted to it even more so. He ran through the trails, trying to go as fast as possible. He jumped up in the air once or twice, even though that’s not customary in Nordic. Downhill is probably his next adventure.

We took a short break at Josie’s, a little cabin in the trail system where you can drink coffee, eat a waffle and listen to a story from 1960 Olympian Joe Pete Wilson. We had taken our skis off, but it didn’t feel that way.

“When do the phantom skis stop?” Jesse asked.